Dee Kosh (born 2 November 1988 as Darryl Ian Koshy) is a Singaporean YouTuber and online personality. As of August 2020, Dee Kosh has over 380,000 subscribers on YouTube, 229,000 followers on Instagram and over 205,000 followers on Twitter. He became a trending topic in August 2020 for alleged sexual harassment of minors.[1]

Dee Kosh was born as Darryl Ian Koshy on 2 November 1988.[2] He grew up and went to school in the Philippines.[3] After being continuously teased for skin colour, Dee Kosh started telling jokes to overcome his insecurities.[4] Even though his parents are ethnically Indian and Chinese,[5] he states that he is "Malay by heart".[6] He returned to Singapore in April 2010 to serve his national service requirements.[7] 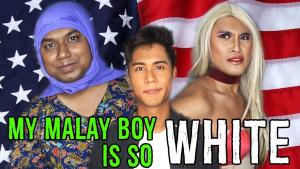 Dee Kosh pictured as Ria Warna in the thumbnail for this video.

According to YouTube, Dee Kosh's channel was created in 2006. However, he only begun uploading videos in 2011. His first video titled 'Dee Kosh' was uploaded on 31 January 2011.[8] Dee Kosh's channel is characterised by comedic vlog-style content and skits where he dresses up as characters like Xiao Tina,[9] Lechme[10] and Ria Warna.[11] As of June 2020, his most viewed video is ‘Singaporean Style (Gangnam Style Parody)’ with 3.2 million views. 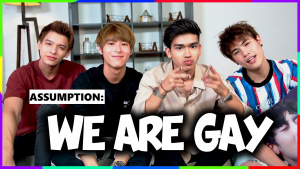 From left to right: Shi Song, Ben, Hamza and Xinde pictured in a 2019 YouTube video.

Over the years, Dee Kosh has introduced seven personalities to his YouTube platform. As of 2020, he manages the following influencers. 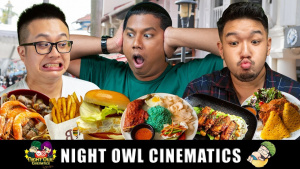 Dee Kosh pictured with NOC's Ryan Tan (left) and Aiken Chia (right) in the thumbnail for a Food King episode.

As late as July 2020, Dee Kosh was listed as a 'partner' on NOC's website in addition to producing, hosting and acting in their videos. In light of the sexual harassment allegations made against Dee Kosh in August 2020, his management reportedly withdrew his services from NOC.[16] A statement by NOC that was released on 19 August 2020 clarified that he was only engaged as a freelance content partner and was never a business shareholder.[17] Dee Kosh is most prominently recognised for Food King[18], which he has been hosting since 2017[19] and Do It For The Money, a segment where he engages with random passers-by.[20]

Dee Kosh has created content with various online personalities over the years. On his channel, Dee Kosh has a series with Hirzi Zulkiflie titled SYAxRIA. As of June 2020, the series has seven episodes.[21] 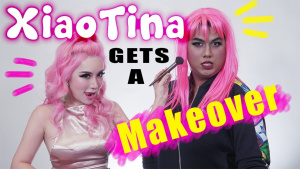 The following table lists some of the channels that Dee Kosh has appeared on.

According to a statement by his employer, POWER 98FM, Dee Kosh applied for leave in light of the sexual harassment allegations against him in August 2020.[22][23]

On 15 August 2020, several underage individuals came forth on Instagram and Twitter with allegations and conversation screenshots that incriminated Dee Kosh.[30] Subsequently, one of the minors was served a lawyer's cease and desist letter to take down his posts.[31][32] However, it was reported on 17 August 2020 that Dee Kosh's lawyers had withdrawn their involvement from the case.[33] That same day, Dee Kosh released an apology statement on Instagram where he also addressed one of his conversations with a 15-year-old boy.[34] A portion of his apology post reads as such:

"... even though I had put out on an earlier statement on Instastories denying allegations which had surfaced initially, I now admit that there is truth to some of the things which are being said now, and I am sorry to the people I have hurt in the process... There are some screenshots circulating of me texting with a 15-year-old that I now accept is problematic. My tone was questionable, but there was absolutely no intent to groom him."[35] 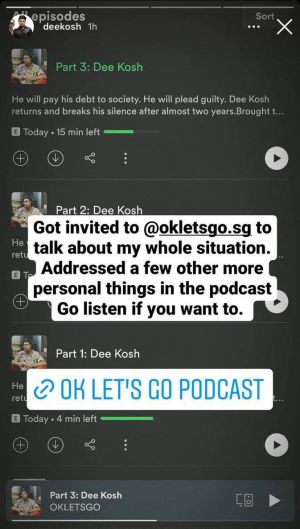 Dee Kosh announcing his appearance on OkLetsGo. Screenshot from Mothership.

On 28 January 2022, local podcast OkLetsGo released an episode featuring Dee Kosh as its guest speaker.[39] On the afternoon of the same day, Dee Kosh published an Instagram story to announce that he had been “invited to talk” about his case and that he “addressed a few other more personal things.”

Split into three parts, Dee Kosh’s episode was enclosed with the following caption:

“He will pay his debt to society. He will plead guilty. Dee Kosh returns and breaks his silence after almost two years.”[39]

The podcast episodes were initially available on Spotify, but have since been taken down.[39] According to a comment left on OkLetsGo’s Facebook page, the episodes were removed at Dee Kosh’s request.

Dee Kosh speaking in his “Finally Addressing Everything” video. Screenshot from Mothership.

On 25 January 2022, Dee Kosh updated his personal Instagram account with a countdown on his Story, stating that he was “finally ready to talk.”[40]

Affirmation that he is not a paedophile

Later on 26 January 2022, Dee Kosh uploaded a nine-minute video on YouTube.[40] In the now-privatised video, he affirmed his desire to take personal responsibility for his actions, wanting to “set the record straight” and “correct the falsehoods that have been circulated by the media.”[40]

Before proceeding with his monologue, Dee Kosh made “one thing very, very clear”:

Dee Kosh went on to state that he had “voluntarily” gone for a professional psychological assessment, where the results apparently concluded that he did not fulfil the “diagnostic criteria for the paedophilic disorder.”[39]

Dee Kosh went to address the news articles circulated by the media on his case.[40] According to him, the headlines of many of these articles "paint[ed] a horrible picture of who [he] was”, with many apparently “combin[ing] all the charges and made it seem like they were all connected.”[40]

Dee Kosh alleged that these articles, along with their “inaccurate headlines” were responsible for the spread of falsehoods.[40] Specifically, he took issue with the articles mentioning that he had paid minors to have sex with him and filmed the acts. Dee Kosh insisted that these claims were “totally false.”[40]

Although his lawyers later contacted these media outlets to rectify these “errors”, Dee Kosh said that it was too late, as “the story [had already been] twisted and spread all around.”[40] He quoted two media outlets in his monologue:

“So for example here on Mustsharenews, they reported that, you know, three counts of possessing and making obscene videos of minors which is completely false, and they edited it. And Today Online also did the same thing. Also edited it but like I said, by then it was too late already.”[40]

Addressed the charge of him filming minors

Insistence that he did participate in any form of sexual encounter

Dee Kosh went on to address his charges under Section 3762B, stating that he wanted to share some “undeniable facts”, including:[40]

Making reference to material he had searched on his phone, Dee Kosh stated that in Singapore, the legal age to have sex is 16, but this number is raised to 18 should a commercial element be involved.[40]

Claiming to be unaware of these regulations, Dee Kosh said he was “wrong” and would “take full responsibility” for his actions:

“I really should have known better and I apologise for my behaviour and my text messages. I’m not a predator, I didn’t specifically target individuals who were 17.”[40]

Dee Kosh closed this segment by stating that ignorance of the law was inexcusable and that he regretted his actions.[40]

Addressed his charge under the Children and Young Persons Act (CYPA)

Dee Kosh also sought to clarify his CYPA charge. To preamble this segment of his monologue, Dee Kosh, stated that dating apps were intended for adults. Despite this, he said it was possible for users to be approached by individuals whom they assumed to be of legal age.[40]

In an effort to “release himself of all faults”, Dee Kosh admitted that he ought to have been more careful and run the necessary checks instead of assuming that "everyone on the app is following the rules and [was] at least 18.”[40]

Dee Kosh stated the following to be true:[40]

Desire to tell his side of the story

Dee Kosh ended the video by admitting that he had made some “terrible mistakes” which had in turn impacted his loved ones. That was why he intended to plead guilty.[40]

“Words really cannot describe and express how truly sorry I am but I believe that the law is the law and what needs to be done will be done.”[40]

Dee Kosh went on to state that the video was not intended to change people’s views on his character. Instead, he claimed that he wanted to “personally contextualise” his charges and “make these facts very, very clear.”[40]

“To me, all I wanted was to be able to tell my side of the story and I really feel like I did [so] today. I am not going to be fighting this case. I am not going to be taking it to trial. I am ready to receive whatever consequence[s] the law has for me, even if it means [going] to jail.”[40]

Dee Kosh visibly cried as he shared his closing statement, where he expressed gratitude to everyone who “[had] been supporting [him]”.[40]

On 25 January 2022, Dee Kosh expressed his intention to plead guilty to multiple counts of sex-related offences at a court hearing. Dee Kosh’s intention was conveyed to the court by lawyers from Eugene Thuraisingam’s firm. The court then set 10 March 2022 to be the date Dee Kosh officially pleads guilty in court. 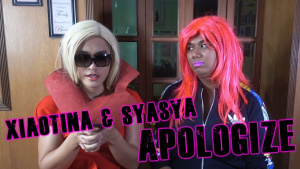 Hirzi and Dee Kosh pictured in their apology video to Nicole Choo.

In 2018, local YouTuber Nicole Choo published a collection of poetry in conjunction with the BuySingLit campaign. Following the release, Dee Kosh and Hirzi uploaded a YouTube video criticising the book. In the video, they pointed out that Nicole’s work read more like "social media captions" than poetry.[41] The video was later taken down due to an alleged copyright issue. The Associate Editor of Rice Media, Julian Wong addressed Dee Kosh’s video through an article titled 'At 19, Nicole Choo is A Published Poet. So What?'. Julian argues that it was unfair for them to have undermined Nicole Choo’s work in such an insensitive and crass manner. [42] The article also included encouraging sentiments from the local Youth Poet Ambassador Pooja Nansi who felt that poetry was subjective and that everyone should have the opportunity to express their creativity. On 25 May 2018, Dee Kosh and Hirzi posted an apology video to Nicole Choo.[43] 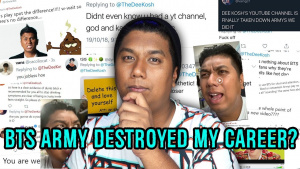 The video in which Dee Kosh revealed the social experiment.

“Unpopular Opinion : BTS’s songs all sound the same. I need something fresh! Come on now….”.[44]

The tweet provoked negatively responses from the K-pop group's fans. Subsequently, it appeared that Dee Kosh’s YouTube channel had been deleted. He then posted a video where he seemed distressed, saying that the fans had gone too far by emailing his bosses at the radio station.[45] On 20 October 2018, Dee Kosh revealed that the stunt was a social experiment to show the effect of ‘mob mentality’.[46]

For more information on the incident, refer to Eden Ang.

Dee Kosh initially spoke out about Eden Ang’s sexual harassment incident on Instagram (IG) Live where he revealed the evidence that was sent to him by the alleged victim.[47] He then uploaded a compilation of the IG Live videos to his YouTube channel. His video sparked more responses from others involved the incident, which resulted in the unfolding of the saga.

In 2017, JianHao Tan, Ryan Sylvia and Dee Kosh collaborated to produce a YouTube video where they rated the attractiveness of other local influencers based on whether they would have sex with them.[48] The video provoked criticism and prompted reactions from the likes of Noah Yap, XiaXue[49] and Naomi Neo. Noah Yap in particular responded with a video of his own in which he reflected on the "drama" of the industry.[50] In January 2020, the issue resurfaced in Channel News Asia's 'The Big Read: Power, fame and fortune - a glimpse into Singapore’s lucrative YouTube industry'.