Nicole Choo is of Peranakan descent.[4] In primary and secondary school, she took up rhythmic gymnastics as a co-curricular activity.[5] 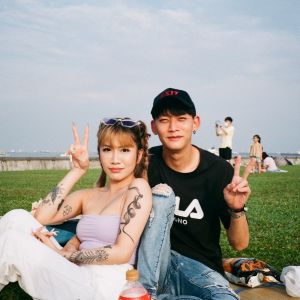 Nicole Choo and boyfriend Noah Yap at the Marina Barrage. Photo from Instagram.

Nicole Choo is currently in a relationship with Ah Boys To Men actor, Noah Yap. The couple celebrated their one-year anniversary on 9 December 2021.[6]

Nicole Choo was a student in St. Margaret's Secondary School and subsequently, Ngee Ann Polytechnic[7] where she took a diploma in Early Childhood Studies. During her time in the course, she interned at childcare centres in Singapore.[8] She eventually left the course after realising that it was not her passion.[9] In an interview with ZULA’s YouTube segment, Ask ZULA, Nicole also shared that while studying, she heard a Mass Communications lecturer bad-mouthing her.[10]

Nicole Choo first rose in popularity in 2015 after she was featured in Ridhwan Azman’s YouTube video titled 'Ways Guys Get Rejected'.[11] As of August 2020, she operates on three main social media platforms - YouTube, Instagram, and TikTok. Apart from her main Instagram account, she also manages a meme (a video or image, typically humorous in nature) account which has over 8,000 followers at the time of writing. 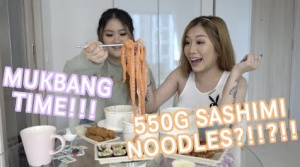 The thumbnail for one of Nicole Choo's "mukbang" videos. Photo from YouTube.

Nicole Choo joined YouTube in 2014.[12] On 5 February 2015, she published her first video titled 'February Collective Haul'.[13] Since then, she has grown her YouTube channel by producing lifestyle-related content consisting of vlogs,[14] trending challenges,[15] beauty[16] and fashion videos.[17] As of August 2020, her most viewed video is a 2016 production called 'BOYS VS GIRLS (BESTFRIENDS)' which has garnered over a million views.[18] Nicole Choo has also been featured in other YouTube productions apart from her own such as TEAM TITAN[19] and Unzippedtv.[20]

On 19 December 2021, Nicole posted a YouTube video documenting her breast augmentation surgery journey, as well as the post-surgery recovery process.[21] In the video, she credited and praised Clifford Aesthetics’ Dr Timothy Shim for her smooth surgery. The clip has since gained over 32,000 views. 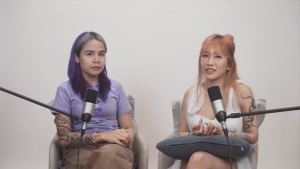 Nicole Choo guested on the Ask ZULA segment of ZULA, TheSmartLocal’s female-centric site.[10] In an interview hosted by influencer and online personality Leah, Nicole Choo shared about her social media journey, her current and past relationships, her book titled Nineteen, and her breast augmentation surgery.[21]

On the third episode of SHOUT’s online reality show, HOLE, Nicole Choo engages in a blind-dating activity.[22] The involved parties are unable to see each other and can only interact through a small hole.

Nicole Choo was featured on the MOSG YouTube channel, where she spoke out about her experience with online hate and cyberbullying, as well as how she has learnt to cope with it.[25] In the interview, the social media influencer became emotional when she shared about her book, Nineteen. She had felt like all her “efforts were going down the drain” with the scrutiny and criticisms that followed.

First appearing on the TEAM TITAN YouTube channel’s Team Titan Show podcast, Nicole shared about the controversial relationship she had shared with Ah Boys To Man actor, Ridhwan Azman[26]. She also went on to speak with the hosts about moving on after the breakup, as well as her book Nineteen.

A month later, she appeared on Jianhao Tan’s JEBBEY FAMILY YouTube channel, where the team and Nicole surprised her ex-boyfriend, Ridhwan with her appearance.[27] At the time, both had not met each other in about 5 years.

As a social media influencer, Nicole Choo has collaborated with brands such as ShopBack, Uber, Coca-Cola and Resorts World Sentosa Singapore.[28] In June 2016, she uploaded a video in collaboration with ShopBack titled 'UPDATED EVERYDAY MAKEUP TUTORIAL', depicting her daily makeup routine and featuring the products used that were obtained through ShopBack.[29] As of August 2020, the video has over 500,000 views and is one of her most viewed videos on YouTube.

Influence Asia 2017 was a live awards event organised by Gushcloud Pte Ltd.[30] The show aimed to give due recognition to social media content creators in Singapore, Malaysia, Indonesia, Philippines, Korea, Malaysia, Thailand, and Vietnam. Nicole Choo was a Top 15 nominee under the category “YouTube Personality”.[31] 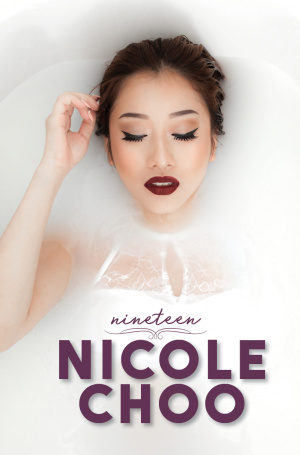 The cover page of 'nineteen by Nicole Choo'.

On 10 March 2018, Nicole released a book titled 'nineteen by Nicole Choo' through the publisher, Bubbly Books. The book was released in conjunction with BuySingLit, a movement meant to promote local authors.[32] The book retails for SGD$19.90 on Bubbly Books.[33] The book consisted of a variety of poems, expressing her feelings based on her life experiences. Nicole held two book signing events at two Popular Bookstore branches - Bras Basah and Nex.[34] nineteen placed number 7 on The Straits Times list of bestsellers on 27 March 2018.[35]

The book received criticism from netizens and fellow YouTubers alike. A writer from local entertainment publication Zyrup published a post reviewing the book. According to the writer, the book was "easily digestible" but mostly "amateur and shallow at best".[36]

Dee Kosh responded to the release of the book through a YouTube video with Hirzi Zulkiflie from Munah Hirzi, titled 'Reading Nicole Choo’s Book'. The video was later removed due to copyright issues filed by Nicole Choo's publisher, Bubbly Books.[37] The Associate Editor of Rice Media spoke out against the way Dee Kosh and Hirzi commented on her book, stating that at times their commentary "...came uncomfortably close to sexual harassment and cyberbullying...".[38] After the initial video was taken down, Dee Kosh and Hirzi posted a follow up video titled 'WE’RE SORRY NICOLE CHOO'. As of August 2020, this video has also been taken down. 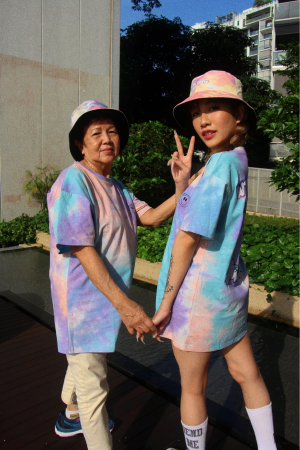 Nicole Choo launched her online croissant business on 17 December 2021, which was accompanied by an Instagram and website launch for this venture as well.[39][40][41] The brand markets a 24-hour delivery service, with orders delivered within 2 hours.

On 12 January 2018, Nicole launched a false eyelashes store called Nikki The Label. There were five different type of lashes in the debut series. Within five months of the official launch, two types of falsies in the collection had sold out.[45] As of August 2020, the last update on the brand's Instagram page was on 18 May 2018.[46]

Public break up with Ridhwan Azman (2017) 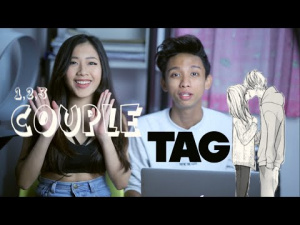 Nicole Choo and Ridhwan Azman pictured in a "couple tag" video in 2015. Photo from YouTube.

Nicole Choo started dating fellow YouTuber Ridhwan Azman in 2015, shortly after she appeared as a featured guest in his video, 'Ways Guys Get Rejected'.[48] When the relationship officially ended in 2017, Nicole Choo claimed that the relationship between her and Ridhwan had been psychologically and physically abusive. She also revealed that they were not faithful to each other. Nicole Choo's initial allegations were made on her personal blog which has since been deleted.[49] The situation escalated when the two took the matter to their Instagram platforms.

Prompted by Nicole's allegations, Ridhwan responded by expressing his disapproval of her decision to share the personal details of their relationship on a public platform. Ridhwan retaliated by elaborating on the violent acts that Nicole had inflicted onto him as well.

The YouTuber Dee Kosh also responded to the issue on his Instagram live, stating that he was not supportive of the way the two were handling their break up. Deekosh's Instagram live was then re-uploaded onto YouTube by an anonymous user.[50] As of August 2020, the video has more than 195,000 views. The incident had professional repercussions for Nicole, where her contract with Ezbuy was reassessed and any collaborations between the two parties were temporarily suspended.[51]

In 2016, Nicole Choo declared that she was allegedly pregnant with Ridhwan’s child. Many netizens expressed concern over her pregnancy, considering that she was only 17 years old at the time. Nicole Choo later announced that her pregnancy had been a hoax. After the incident, she uploaded a video titled 'WHY I HATE THE INTERNET' where she explained that the posts on her pregnancy had been a social experiment. The original video posted by Nicole has since been deleted. YouTuber Ziddy14HD responded to the incident with a video titled 'YOUTUBER FAKES PREGNANCY! (Nicole Choo Rant)'. This video included snippets from the original video where Nicole explains the reasoning behind the social experiment. According to Nicole, the experiment was meant to "show people how people are so drawn to negativity and drama whenever they see it online".[52]