Soh Rui Yong (born 6 August 1991) is a Singaporean long-distance runner and marathoner. Rui Yong has broken three national records and is also the first Singaporean marathoner to have won back-to-back gold medals in the Southeast Asian (SEA) Games. He is sponsored by ASICS, Garmin and Oakley. Outside of his sporting achievements, Rui Yong does Business Development at TheSmartLocal (TSL) Media Group where he is also the company's first Sports Ambassador. 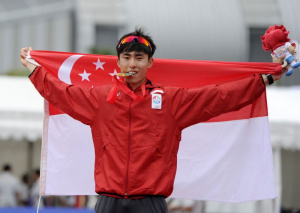 Soh Rui Yong carrying the Singapore flag after he won the country a gold medal in the 2015 SEA Games. Photo from Yahoo!News.

Growing up, Rui Yong looked up to the French footballer, Zinedine Zidane. He comes from a family of runners, two of whom have run competitively at one point in their lives. Rui Yong's mother had been the captain of the Raffles Institution cross-country team back in the day.[1] In 2012, Rui Yong's younger sister, Romaine Soh, represented her junior college in the steeplechase event.[2]

Soh Rui Yong started running in 2004 when he was a Secondary 1 student in Raffles Institution and continued to run competitively in junior college. He started participating in marathons after seeing that he performed well at longer races.[3] Rui Yong ran his first marathon in 2014 at the California International Marathon.[4] After completing his GCE 'A' Levels, Rui Yong secured a university scholarship from the Singapore Sports Council and completed his tertiary studies at the University of Oregon.[5] 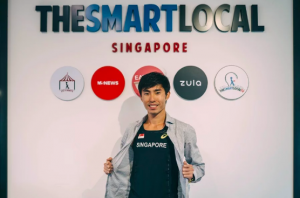 After graduating from the University of Oregon in 2015, Rui Yong joined Sports Singapore as a Coaching Development Executive.[6] In 2018, he joined TheSmartLocal as a part of the Business Development team. He is also TSL's first Sports Ambassador.[7]

Rui Yong is a member of an informal running group called Team Tze Char. The group has kickstarted a shoe foundation where less-privileged student-athletes are gifted a pair of shoes every month.[8] 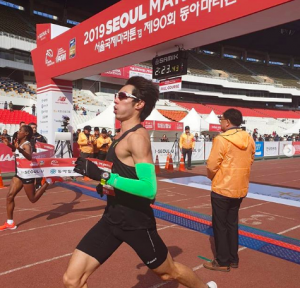 Rui Yong set the national record for the fastest marathoner in Singapore's history during the 2019 Seoul Marathon. Photo from Instagram.

As of 2019, Rui Yong is the fastest marathon runner in Singapore's history having beaten the 1995 national record.[9] 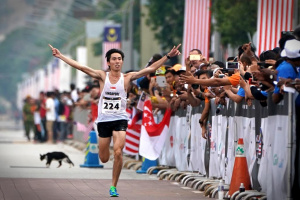 Rui Yong winning his second gold medal at the SEA Games in 2017. Photo from TODAY Online.

Rui Yong is the only Singaporean marathoner to have won consecutive gold medals at the Southeast Asian (SEA) games.

Rui Yong has been applauded in the media on several occasions for his sportsmanship. In 2017, he had given S$500 of his Singapore Marathon prize money to Kenyan counterpart Elisha Sawe, hoping that the money would help Sawe to travel and compete in other races.[18] The same year, Rui Yong offered his competitor - Indonesian Agus Prayogo - the remainder of his isotonic drink after noticing that Prayogo had missed his hydration point.[19]

As part of the pre-event publicity for the 2022 Pocari Sweat Run, run organisers Pocari Sweat invited Rui Yong to a 2.4km challenge on 4 September 2021 to drum up excitement and hype for the event. He finished the distance at a time of 6min 53.18sec, becoming the first Singaporean man to finish a 2.4km race in under seven minutes, as well as recording the fastest 2.4km time in Singapore.[20]

While the accomplishment garnered positive reactions online, Rui Yong also drew the ire of netizens who criticised the achievement, saying that it was not remarkable given that they knew of army mates and commando soldiers who could complete the distance just as fast as Soh did.[21] In response, Rui Yong issued an open challenge for the event, inviting any Singaporean to take part in the 2.4km race and that any Singaporean who manages to break the 7-minute barrier will receive $700 and 700 bottles of Pocari Sweat, sponsored by him. The prize pot soon grew as more companies came onboard to sponsor prizes, and included additional cash prizes, packets of chicken rice and gym memberships.[22]

It was also announced that at the event, Rui Yong would be racing against Singapore’s fastest Gurkha, Subas Gurung, whose best time was 6min 58sec, though the latter wouldn’t be eligible for the prizes offered by the sponsors as they were only for Singaporeans.[23]

Rui Yong has been embroiled in several incidents that made the local news.

Rui Yong won his consecutive SEA Games gold medal in 2017 which also saw the start of his disputes with the Singapore National Olympic Council (SNOC).

Rui Yong clashed with the SNOC for promoting his personal sponsors on Facebook. SNOC saw this as a breach of agreement.[25] On top of this, Rui Yong had cut holes into his 2XU-sponsored marathon singlet to help him cope with the heat and humidity. At the time, the Australian sporting brand had a three-year sponsorship contract with SAA which the former prematurely ended after the 2017 SEA Games.[26] In September the same year, Rui Yong declined to donate 20% of his S$10,000 gold-medal cash winnings to Singapore Athletics (SAA) as he believed that his coach, Ben Rosario, contributed to his training more so than SAA.[27] 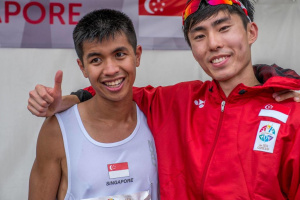 Ashley and Rui Yong pictured in 2015. Photo from TODAY Online.

Ashley Liew is Rui Yong's former national teammate and a fellow competitor in the 2015 SEA Games Marathon. After finishing 8th place in the race, Ashley claimed that he had slowed down for his competitors who had missed a turn in the route.[28] This claim of sportsmanship had earned Ashley the prestigious Pierre de Coubertin World Fair Play medal and much praise for years to come.[29] In October 2018, Rui Yong alleged that Ashley's version of events was untrue.[30] Eye-witnesses of the 2015 marathon such as Steven Quek, Jordan Schilit and Filipino marathoner Rafael Poliquit have offered first-hand accounts that support Rui Yong's allegations.[31]

After various trials and court hearings spanning across almost two years, the trial concluded on 10 July 2021 after 10 days in court. On 23 September 2021, the District Court ordered Rui Yong to pay $180,000 in damages to Ashley, as well as granting an injunction for Soh from repeating the offending comments, to remove them and publish an apology on his Facebook and Instagram pages, and retract the statements he made.[38] Hours after the verdict, Rui Yong wrote in a Facebook post that he will be appealing the decision with the High Court.[39]

On 17 January 2022, it was reported that Rui Yong offered to withdraw his defamation suit against (now former) SA Executive Director Syed Abdul Malik Aljunied, on the fifth day of their ongoing civil trial.[42] During the trial, Malik told the court that he removed the post and comment about 15 hours after publishing it, after a fellow SA management committee member told him that what he wrote was not in good taste. Malik also agreed with Soh’s lawyer that the words he used in the post painted a negative and unflattering picture of Rui Yong.[42]

In response, Soh’s lawyer Gerard Quek said that Soh feels “satisfied with the concessions made” by Malik and “feels in his own way vindicated”, adding that Soh felt it was “not necessary or good for the sport” to have the legal matter continue further, and thus the offer to withdraw the suit.[43] After the hearing, the Straits Times reported that the offer “was not explicitly accepted nor rejected”, but was informed by Malik’s counsel that they would not be taking up the offer.[43]

In December 2019, Singapore Athletics (SA) was ordered to pay Rui Yong S$8,000 in legal fees following a court trial in which they had failed to provide sufficient particulars to support their allegations. SAA paid Rui Yong this sum in January 2020.[44] As of 21 February 2020, SAA has accumulated S$11,000 worth of legal reparations to be paid to Rui Yong.[45]

In October 2020, it was reported that Rui Yong would be withdrawing and discontinuing his lawsuit against SA. In a statement, Soh said that “will henceforth work with SA and the Singapore National Olympic Council (SNOC) to promote a positive image of the sport to the best of his ability”.[46] Singapore Athletics also agreed that it will retract its statements on Rui Yong, as well as ceasing disciplinary proceedings against him.[47]