Markham Shaw Chai Chung (born 1970), more commonly known as Mark Shaw, is the executive vice president and director of Shaw Organisation. The son of the late Shaw Vee King, Mark Shaw is the third-generation scion of the Shaw Organisation.[1][2] For his contributions, Mark Shaw was conferred the Public Service Medal and the Public Service Star by the Singapore government in 2008 and 2019 respectively.[3][4][5]

Markham Shaw Chai Chung was born in 1970.[6] He is the son of the late Shaw Vee King, who was Shaw Organisation’s director until the time of his passing.[7] Mark Shaw’s grandfather is Tan Sri Runme Shaw, the co-founder of the Shaw Organisation.[6] 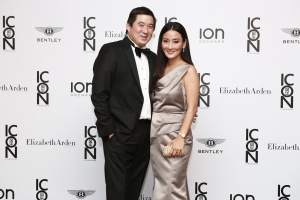 Mark and Tiara Shaw at the ICON Ball 2017. Photo from source.

Mark Shaw is married to Tiara Budiprawiro-Goh, with whom he has two children.[8][9][10] After four years of dating, the couple tied the knot in 2010 and held several wedding receptions on top of a matrimonial ceremony at the Church of St Ignatius in Singapore.[8][11] Mark Shaw also has a 20-year old daughter and a 19-year old son from a previous marriage.[2]

Mark Shaw spent a part of his childhood in Hong Kong before returning to Singapore for his Primary 4 education.[12] From 1981 to 1987, Mark Shaw studied at the Marlborough College in Wiltshire, England where he completed both his GCE Ordinary (‘O’) and Advanced (‘A’) Level examinations. From 1989 to 1992, he studied aeronautical engineering at the Imperial College London.[13]

As of December 2020, Mark Shaw is the executive vice president and director of film distribution company Shaw Organisation, which has cinemas and properties concentrated in Singapore. Since 2015, he has also been the chairman of the Orchard Road Business Association (ORBA).[14] 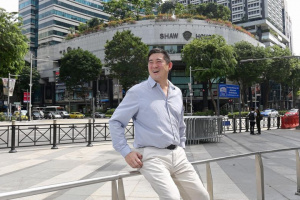 After graduating with a degree in aeronautical engineering from the Imperial College London, Mark Shaw joined the family business in October 1992.[2] He began working as a booker, scheduling films at Shaw-owned theatres before eventually moving on to other roles. For instance, he was involved in the $20 million redevelopment of Shaw Lido. Speaking to The Straits Times in 2015, he said:

"We always try to gauge what customers are looking for in a premium movie experience... (With the revamp), we really wanted to make Shaw House an epicentre for movie premieres and cast events."[15]

In March 2010, it was announced that Shaw Theatres had signed an agreement with IMAX Corporation to install the first IMAX theatre system at the Lido Cineplex, Shaw Organisation’s flagship cinema located in Shaw House.[16] The first IMAX theatre was opened in May 2011.[17] In a statement released by IMAX Corporation, Mark Shaw was quoted as having said the following about the partnership:

"We have watched the IMAX brand grow significantly across the Asia-Pacific region and we believe it is an ideal fit for this iconic location (Shaw Lido). The combination of the growing slate of Hollywood blockbusters in the IMAX format and the super premium IMAX theatre system will deliver an exceptional experience our patrons will seek out and pay a premium for. We believe that IMAX will be a major entertainment anchor for our complex and Singapore."[16]

In 2020, as part of the social distancing and outbreak prevention protocols stemming from the COVID-19 pandemic, movie theatres were ordered to close by the Singapore government. Shaw Theatres reopened seven of its movie theatres in July but had to close its NEX outlet due to the collapse of its ventilation duct in August 2020.[18] Explaining to The Straits Times about the measures Shaw Theatres would take to ensure safety, Mark Shaw said:

“You will see our familiar chequerboard seating arrangement, with a minimum of a two-seat gap between every two or three seats to ensure the 1m safe distancing.”[19]

Since 2015, Mark Shaw has been the chairman of the Orchard Road Business Association (ORBA), a committee that was established in 1998 to look after the interests of businesses in Orchard Road.[14] As the chairman who leads the committee in setting Orchard Road’s business direction, Mark Shaw has been vocal about its revamping and redevelopment. In a 2018 interview with Sumiko Tan of The Straits Times, he was quoted to have said:

“There aren’t really any constructive ideas when people just criticise (Orchard Road). It’s easy to do. But we take it in our stride and we see it as an indicator of how we could improve Orchard Road, and the things that need to happen to make it not boring.”[2]

Besides his roles in Shaw Organisation and ORBA, Mark Shaw has also been appointed to hold key positions in several organisations. The following is a list of board positions that Mark Shaw has held over the years.