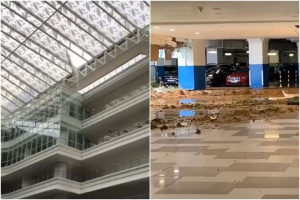 The aftermath of the roof collapse at ITE College Central. Photo from source.

On 10 November 2020, a section of the "bubble fly roof" at ITE College Central collapsed, flooding the ground floor of the building with rainwater, soil and debris. A portion of the roof had collapsed due to the weight of the accumulated rainwater caused by a roof-pump malfunction and heavy rainfall.[1] The Instagram page, SGfollowsAll posted several images and videos which captured the aftermath of the incident.[2][3] In one of the videos, a large number of bystanders were seen gathered by the corridors that overlooked the accident site. An Instagram user who happened to be a bystander at the time commented that "everyone in Koufu swarmed outside when it happened".[2] No casualties were reported.[4] 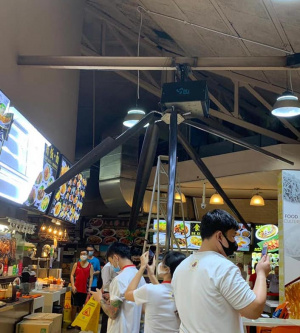 Pictured: The blades of the ceiling fan were bent from the impact. Photo from Facebook.

On 28 October 2020, a 20-year-old youth and an 82-year-old woman sustained injuries after a ladder hit a ceiling fan at a coffee shop in Tampines.[5][6][7] According to witnesses’ social media posts, a worker was conducting maintenance work on the fan when the incident occurred. An eyewitness recounted the event to the alternative news site, Mothership in which she said:

“When they (the workers) turned on the fan and moved the ladder out (of the way) slightly, it was still quite near to the fan. I think they lost control of the ladder and it fell, which hit the fan. The fan wasn’t in the centre of the motor, which caused it to be too close to the roast meat store signboard. It started hitting the signboard and the signboard flew, which hit a teenager and an elderly woman.”[8]

According to another witness account, the youth was struck on the back of his head when he attempted to protect the elderly woman.[9] Both victims were conscious when taken to Changi General Hospital.[10] At the time of writing (November 2020), police investigations are still ongoing to ascertain the exact cause of the accident. 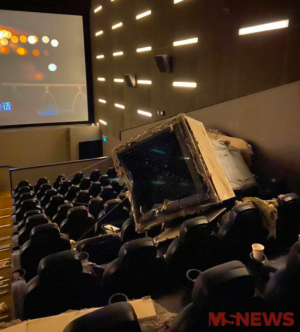 On 30 August 2020, a ventilation duct was dislodged from the ceiling of Shaw Theatres NEX Hall 6 during the screening of the 2020 film, Tenet. The massive ventilation duct crashed down at around 4.45 PM, prompting patrons to exit the cinema hall immediately.[11][12] According to The Straits Times, two patrons were injured and taken to Tan Tock Seng Hospital where they were treated.[13] Sebastian, a moviegoer who was interviewed by the alternative news site, MustShare News recalled the incident and was quoted to have said:

“I heard a weird crumbling sound and saw dust falling followed by big blocks falling from the ceiling. My first reactions were to cover my head. The next moment, I saw the cable holding the ventilation up hanging next to me.”[11]

The affected moviegoers were subsequently given complimentary movie vouchers as compensation for their disrupted movie experience.[13]

Following the incident, Shaw Theatres closed its NEX outlet indefinitely and appointed an engineer from Singapore's Building and Construction Authority (BCA) to investigate the cause of the incident.[14] In October 2020, the Ministry of National Development (MND) released a statement reporting on the preliminary findings of the investigation. A part of the statement reads as such:

“... preliminary findings indicate that a significant amount of water had accumulated in the layer of acoustic material surrounding the ACMV (air-conditioning & mechanical ventilation) duct. The weight of the accumulated water is likely to have overloaded the brackets that were supporting the ACMV duct, causing them to give way.”[15]

In December 2020, the Building and Construction Authority (BCA) released an official statement on the cause of the accident, stating that it was an accumulation of water in the insulation material surrounding the ACMV duct which overloaded it and caused it to collapse.[16]

As of December 2020, Shaw Theatres at NEX remains closed until further notice.

On 8 January 2020, 13-year old Carlyn Wee was found motionless at the foot of a multi-storey car park in Pasir Ris.[17] According to the Chinese newspaper Shin Min Daily News, Carlyn had lost control of her friend's fixed-gear bicycle after cycling down a ramp on the sixth level of the carpark.[18] Carlyn, then a student at Hai Sing Catholic School, was believed to have collided with a 1.1-metre-high metal railing which then caused her to be flung over the parapet.[19] According to MustShare News, she had managed to hold on to the railing before losing her grip and falling to her death.[20] On 11 January 2020, Carlyn Wee was cremated at Mandai Crematorium.[21]

Residents who were interviewed by The Straits Times and AsiaOne noted that youths were often seen practising parkour at the roof garden and cycling at the upper levels of the car park as there were fewer vehicles parked there.[22] Following the incident, Singapore's Land Transport Authority (LTA) formed a panel to review the use of fixed-gear bicycles.[23]