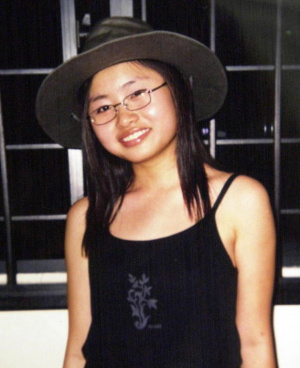 Tina Lim as a teenager. Photo from source.

Tina Lim was a student in the Normal Technical stream at Unity Secondary School.[4][5] The missing 14-year-old was reportedly about 1.65m tall. At the time of her disappearance, she resided at Choa Chu Kang Avenue 4 with her father, step-mother and younger step-siblings.[6] According to a news report, Tina Lim's biological parents are divorced and she was the only child born from her father's first marriage.[7] 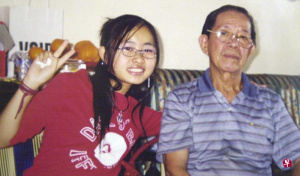 Tina Lim pictured with her grandfather. Photo from source.

Tina Lim was last seen by her father on 22 June 2002 when she left her Choa Chu Kang home at around 4.15 pm. She left to visit her grandfather at his home in Jurong West but never arrived at her destination.[8]

Tina Lim's father filed a police report when she failed to return home on 23 June 2002.[5] He reportedly distributed thousands of flyers in Singapore before extending his search to places such as Johor, Genting, Malacca and Kuala Lumpur by September 2002.[9] He also denied the speculations that she had willingly run away from home. Speaking to The New Paper, he said:

"She would not have the courage to do that [run away]. Plus, I was the one who wanted her to go and see her grandfather. If she had wanted to leave home, she would not have asked me to drive her there."[6]

In a televised interview with Tina Lim's teachers, she had also been described as a "quiet", "helpful" and "obedient" student.[5]

On 1 November 2003, Tina Lim's father was at his late father's wake when he received several calls from a girl who claimed to be his missing daughter.[10] According to a transcript of the recorded call that was published by The New Paper, the female caller was reluctant to divulge her exact location although she confirmed that she was in Singapore.[11] After investigating the calls, the police concluded that they were hoaxes but Tina Lim's father thought otherwise. He said:

"Seven relatives in all heard her voice, and I'm her father. How could I make a mistake?"[12]