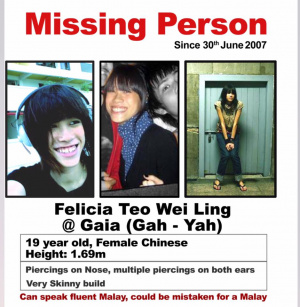 Felicia Teo Wei Ling was a 19-year-old final year student at Lasalle College of the Arts who was last seen on 30 June 2007.[1] Her case remained unsolved for about 13 years until it was referred to the Criminal Investigation Department (CID) in July 2020.[2] On 17 December 2020, a male suspect, Ahmad Danial Mohamed Rafa'ee was charged in court for the murder of Felicia Teo.[3] As of 18 December 2020, her remains are yet to be found.

Felicia Teo was last seen by her parents on 29 June 2007 when she left her home at Bain Street, Bras Basah.[4] She reportedly withdrew $30 from an ATM on 29 June 2007 near her home.[1] Closed-circuit television footage showed that she entered the lift of a Marine Terrace flat with two men between 1 to 2 am on 30 June 2007. This was the last public sighting of Felicia Teo. According to phone records, the last text message sent from Felicia Teo's mobile phone was at 2.37 am on 30 June 2007.[1]

Felicia Teo's mother lodged a missing person's police report on 3 July 2007.[2] Following her disappearance, many of Felicia Teo's family and friends distributed fliers and searched areas like Clarke Quay, Geylang and Woodlands.[1] Her parents also expanded their search to Johor Bahru, Malaysia in fear that she had been abducted.[5] Speaking to The Straits Times in 2011, Felicia Teo's mother said:

"There was no unhappiness at home, and she would tell me all her problems. Up to today, I still think she was kidnapped or maybe she fell and can't remember anything... I try to think positive, I imagine that my daughter is married and has moved to another country."[6]

Following the missing person's report, the police interviewed the two male individuals who were last seen with Felicia Teo at the Marine Terrace flat. They were reportedly friends of Felicia. At the time, both men maintained that she had left the flat in the early hours of 30 June 2007 on her own accord.[7] The police classified and investigated Felicia Teo's case as a missing person's case, having found no incriminating facts.[2]

In July 2020, the Criminal Investigation Department (CID) took over the Felicia Teo case. The CID discovered new leads after tracing Felicia Teo's belongings and linked one of her possessions to a man named Ahmad Danial Mohamed Rafa'ee.[2][8] Ahmad Danial was one of the two individuals who was with Felicia Teo at the Marine Terrace flat.

Ahmad Danial Mohamed Rafa'ee was arrested on 15 December 2020.[2][3] According to a report by TODAY Online, he had been working as a creative manager at the gaming company, Razer.[9]

On 17 December 2020, 35-year-old Ahmad Danial Mohamed Rafa'ee was charged with the murder of Felicia Teo.[10] His suspected accomplice, Ragil Putra Setia Sukmarahjana is still at large and believed to be overseas.[11][12] According to court documents, the two men allegedly murdered Felicia Teo between 1.39 am and 7.20 am on 30 June 2007 in a 10th-floor unit of Block 19 Marine Terrace.[9]