Noriff Danial Ashriq (born 1991) is a Singaporean host and actor who is best known for his role as Rafi on the Mediacorp drama series, Police and Thief.[1] He was also the co-founder of the homegrown food and beverage establishment, Beef Bro and is a brand ambassador for Adidas Singapore. As of September 2020, Danial Ashriq has over 39,000 followers on Instagram. 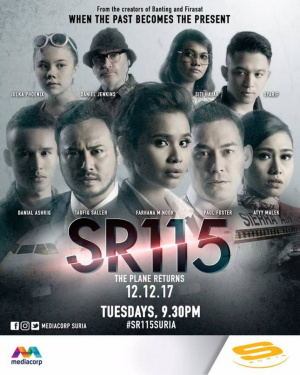 Danial made his television debut in 2004 at 13 years old.[5] Since then, he has grown to be a seasoned bilingual actor, having played roles in both television and film projects of various genres. He currently stars in the long-form English drama series, Kin and cameoed in the horror film, Repossession in 2019.[6] The following is a list of his work over the years. 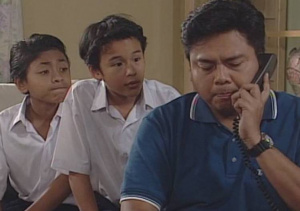 Danial Ashriq (middle) in Season 1 of Police and Thief. Photo from meWATCH.

Danial starred in the popular family sitcom, Police and Thief from 2004 to 2010. He played Rafi, the mischievous son of the police inspector, Sergeant Dollah.[15]

Danial played Ali in Love Notes (2013), a made-for-television movie. Set in 1960s Singapore, the story revolved around about a kampong boy named Meng (played by Eden Ang) who tries to become famous on television.[13]

In 2015, Danial starred in episode seven of Verdict, a docu-drama series about lawyers and the legal system in Singapore.[16] He played Yusof Bin Ahmad, an innocent man who was sentenced to jail for alleged drug possession.

In 2019, Danial played Johan, an aspiring singer-songwriter in Fried Rice Paradise, a 13-episode television series adapted from Dick Lee’s 2010 musical.[17] It was also his second time acting with the veteran actor, Suhaimi Yusof since Police and Thief.[7] 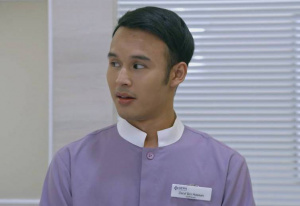 Since 2018, Danial has been acting in the long-form drama, Kin on Channel 5 which also stars the actress, Carla Dunareanu.[18] He plays Zaryf, a nurse who is constantly compared to his older brother, Zaryn.[19] 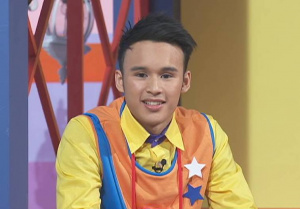 Danial Ashriq on the set of Mat Yoyo Season 2. Photo from meWATCH.

From 2012 to 2014, Danial hosted three seasons of Mat Yoyo, an educational program for pre-school children on the Malay-language channel, Suria.[24][25] The show ran for three seasons with a season every year.

From 2018 to 2019, Danial was one of the co-hosts of the third season of Manja, a Malay-language program that aimed to educate viewers on lifestyle, culture and entertainment. In the first episode, Danial visited Serangoon Road where he explored its heritage and the making of teh tarik.[26]

Besides acting, Danial is also a brand ambassador for the sportswear company, Adidas.[27] On top of participating in the brand's campaigns and events, he regularly features Adidas products on his Instagram page.[28][29] 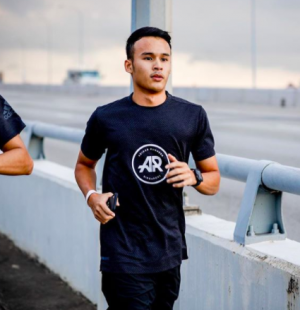 Danial in the AR-SG gear. Photo from source.

According to Danial, his first run with AR-SG was in September 2017.[30] Between 2018 and 2019, Danial participated in at least four runs that were organised by Adidas.

In May 2018, Danial was involved in "Run To Rise", a running event meant to inspire people to adopt transformative life routines. Danial and other participants from the Adidas Runners Singapore (AR-SG) group ran from Suntec City to Marina Barrage, where they caught the sunrise.[31]

In June 2018, Danial and other celebrities such as Joakim Gomez and Iman Fandi took part in the "Run For The Ocean" campaign with the ocean awareness project, Parley for the Oceans.[32] For every kilometre ran worldwide, Adidas pledged a dollar (USD) to Parley for the Oceans to help them in their bid to end marine plastic pollution.[33] Danial participated in his second run in June 2019. It was reported that over $10,000 USD was raised by Adidas runners in Singapore through the two runs.[34]

At the start of 2019, Danial took part in Adidas’ "Resolution Run" which sought to inspire fitness resolutions among its participants for the year ahead. The AR-SG group ran a five-kilometre route from VivoCity through Mount Faber, ending at Henderson Wave.[35]

In 2017, Danial co-founded Beef Bro with the local entrepreneur, Norvan Tan. The pair met when Danial was the brand ambassador for Norvan’s customisable slipper business, Blackout.[36] Beef Bro sells premium blow-torched beef cubes served with a variety of dipping sauces and toppings. While Norvan handled the overall operations, Danial took charge of the business' branding and marketing. Beef Bro made its physical debut at the Ramadan Bazaar in May 2018.[37] Danial is quoted to have said the following to a reporter in 2018:

“When we started this business we were sceptical about the response that we will get. At first, we prepared about 30 to 40 kilos of beef every day. But the response has been [so] overwhelming [that] we increased our beef [supply] to about 100 kilos every day. We expect to go all the way to 200 kilos on the weekend, or maybe more.”[38]

However, in mid-2018, Danial reportedly left Beef Bro to dedicate more time to his family and acting.[36][37]