Cherian George is a Singaporean academic and the author of award-winning books such as Freedom from the Press (2012).[1] He has over a decade of professional experience in journalism and publishing before entering academia in the early 2000s. Well known in both local and international academic circles, Cherian George made headlines in 2013 when his then-employer, Nanyang Technological University (NTU) denied his application to be a tenured professor at the Wee Kim Wee School of Communications and Information (WKWSCI).[2] At the time of writing, Cherian George is based in Hong Kong where he is a professor of Media Studies at Hong Kong Baptist University.[3]

Cherian George completed his pre-university studies at Hwa Chong Junior College before enrolling into Cambridge University where he graduated with a Bachelor of Arts in Social and Political Sciences.[4] He then obtained a Master's degree from Columbia University’s School of Journalism and subsequently, a Doctorate in Communication from Stanford University in 2003.[3] According to Cherian George's dissertation adviser at Stanford University, Theodore Glasser, the former produced "top-notch" work during his PhD candidature.[5]

Cherian George is married to Zuraidah Ibrahim,[6][7] the deputy executive editor of South China Morning Post who formerly worked at the Singapore broadsheet, The Straits Times as a deputy editor.[8] Zuraidah Ibrahim is the sister of the former Singaporean politician, Dr Yaacob Ibrahim.[9]

According to a 2012 report by Yahoo! News Singapore, Cherian George worked at The Straits Times for a decade.[10] He was the newspaper's arts and photo editor for three years.[11] 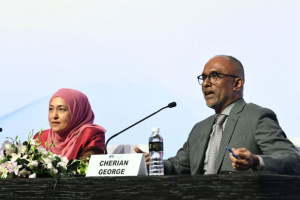 Cherian George speaking at a 2018 conference. Photo from source.

An established academic presence in Singapore, Cherian George has frequently commented on censorship and governance in the island-state.[12] Speaking at a 2012 panel in conjunction with the Singapore Writer's Festival, he said:

In 2018, Cherian George spoke at a public hearing on deliberate online falsehoods where he provided policy suggestions to combat hate propaganda in Singapore.[13][14] Cherian George has also worked at research centres such as the Institute of Policy Studies (IPS).[15] Over the years, he has established working relationships with other Singaporean academics like the sociologist, Teo Yeo Yenn and the economist, Donald Low; with whom he co-authored the book, PAP v PAP (2020). 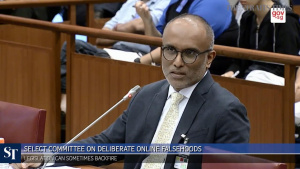 Cherian George was a faculty member at NTU’s Wee Kim Wee School of Communications and Information (WKWSCI) for about a decade. In 2009, he was promoted to the position of Associate Professor and the head of journalism. A year later, he won a teaching excellence award from NTU.[2] Cherian George was also the founding member and first Director of Asia Journalism Fellowship (AJF),[16] a programme that was hosted by WKWSCI from 2009 to 2016.[17][18]

In academia, the tenure system offers faculty members a lifetime guarantee of job security.[19] This ensures that scholars can freely research potentially controversial topics without the fear of losing their job. Cherian George was denied tenure twice by NTU in 2009 and 2013.[20] Following the second rejection, four of the faculty’s most senior members; which included two ex-deans, wrote a letter to Bertil Andersson, the then-President of NTU endorsing Cherian George.[21] They reportedly wrote:

“Those of us who are not yet tenured need to know: what more than Cherian do we have to do?”[2]

Other academics who were familiar with Cherian Georges work, as well as his students in NTU, also voiced their confusion about the school's decision.[5][22] In response to the general disquiet, NTU released a statement about their tenure process. The statement reads as such:

"NTU has a rigorous tenure process. All NTU faculty seeking tenure go through the same process. More than 1,000 faculty have gone through this process at NTU in the last six years and so far, more than 55% have been granted tenure. The tenure review process is purely a peer-driven academic exercise comprising internal and external reviewers. The two equally important criteria are distinction in research and scholarship, and high quality teaching. Service and other contributions to the university, profession, or community are also taken into consideration."[19]

Cherian George formally ended his contract with NTU in February 2014.[23] Later that year, Bertil Andersson re-iterated in an interview that the decision made by NTU's tenure committee was purely academic and non-political.[24]

“I'm impressed by how Hong Kong academics, students and the public have succeeded in vigorously defending academic freedom. [Hong Kong] universities have excellent media scholars who are deeply engaged in society's issues, and the idea of working alongside them is very attractive.”[23] 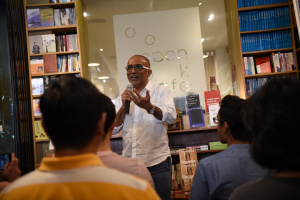 The following is a list of prominent titles that Cherian George has authored and co-authored over the years. He has been published by prominent local and international publishing houses such as NUS Press and Cambridge University Press.