For a complete directory of the 192 candidates in Singapore's 2020 General Elections, click here.

Charles Yeo Yao Hui (born 1990) is a Singaporean politician and criminal defence lawyer.[1] In the 2020 general elections, Charles Yeo was fielded as a Reform Party candidate in the Ang Mo Kio group representation constituency (GRC).[2] He is active on Instagram, where he has over 14,500 followers as of November 2022.[3]

As an advocate and solicitor of the Supreme Court of Singapore, Charles Yeo is a qualified practising lawyer.[4] According to two reports by Asia One, Charles Yeo is also an avid gamer of Dota 2[5] and World of Warcraft.[6][7] In a comment to a Facebook post on 12 July 2020, he called himself a "fairly hardcore gamer".[8]

Charles Yeo was a student at Bukit View Primary School and Victoria Secondary School. He then enrolled in Anglo-Chinese School (Independent) for his pre-university education.[12] He graduated from the University of Warwick in 2014 with a degree in law.[13]

Early involvement in the Reform Party

Charles Yeo has been involved with the Reform Party since 2011. He was made a member of the party’s Central Executive Committee (CEC) in 2019, and officially appointed the Reform Party’s chairman in 2020.[14][15]

On 2 July 2020, Charles Yeo represented the Reform Party at the televised party political broadcast.[16] A day later, he was one of the two members from the Reform Party that was present for the Ang Mo Kio constituency political broadcast.[17] Three of the candidates were absent during the broadcast, one of whom was Soh Guan Soon who had the task to address the public in Mandarin. Charles Yeo had to step in and deliver a speech in Mandarin on behalf of his fellow candidate.[18] With 28.09 per cent of the votes, the Reform Party lost Ang Mo Kio GRC to the People's Action Party team that was led by Prime Minister Lee Hsien Loong.[19]

On 11 July 2020, Prime Minister Lee Hsien Loong's wife, Ho Ching, published a Facebook post responding to the memes of Charles Yeo[20] that had been circulating since his speech on 3 July 2020. An excerpt from her post reads as such:

"I think we should not make fun of Charles Yeo for his attempt to deliver his team’s Chinese message... Yes, it is painful to see his struggle, but that is no reason to make fun of him or his courageous effort."[21]

In light of Charles Yeo's performance in the elections, Tan Min-Liang, the Chief Executive Officer (CEO) of the homegrown brand, Razer, offered to sponsor him some gaming gear.[22] Charles Yeo declined the offer, explaining that he "used to be a huge consumer of razer gear" but stopped doing so after discovering that the company "has been very clearly linked to the establishment in Singapore and the PAP regime".[23]

Following Charles Yeo’s arrest on 12 January 2022 for alleged criminal breach of trust and forgery, he officially “stepped aside” as chairman of the Reform Party “until [the issue] was resolved”.[24][25] Yasmine Valentina, a member of the Reform Party's CEC, was appointed as the party's Acting Chair in his absence.[25]

Charles Yeo first broke the allegations on the Singaporean lawyer, Imran Rahim on 21 July 2020.[26] He released several Instagram videos and posts alleging that he had evidence of Imran Rahim's misconduct within the debate and law communities.[27] Imran Rahim has since released a statement denying these allegations.[28] In a Facebook post dated 23 July 2020, Charles Yeo challenged Imran Rahim to serve him with a Writ of Defamation. An excerpt from his post reads as such:

"Listen up Imran Rahim, I am not afraid of your connections with Davinder Singh, Shanmugam, Ong Ye Kung or Masagos. You are a filthy race traitor whose actions show you to be a typical predatory pappie."[29]

According to TODAY, Imran Rahim is seeking legal advice from Providence Law Asia.[30]

Alleged involvement in criminal breach of trust and forgery

On January 15 2022, the Singapore Police Force said in a statement that they had arrested lawyer and Reform Party chairman Charles Yeo “for alleged involvement in criminal breach of trust and forgery” on 12 January 2022.[31] The police also confirmed that Charles Yeo’s arrest was part of an ongoing investigation against Whitefield Law Corporation, where he works as a criminal defence lawyer.[32]

Charles Yeo had also claimed on his social media accounts that week that he had “spent 15 hours in lock-up on trumped up and false charges”.[31] The police “categorically rejected” his claims.[31]

Charged with wounding religious feelings and harassing a police officer 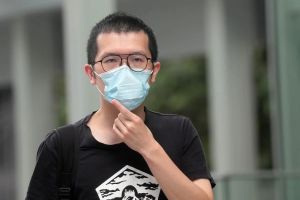 Charles Yeo in court on 19 January 2022. Photo from The Straits Times.

On January 19 2022, Charles Yeo was handed another six charges in court for allegedly wounding religious feelings and harassing a police officer on his Instagram and Facebook pages.[33][34] These acts reportedly took place between November 2020 and February 2021.[33]

Following these charges, Charles Yeo’s personal Facebook page was no longer accessible.[33] His mother also posted his bail of S$5,000.[33][34]

The judges had found that Charles Yeo had “acted improperly in filing both applications when he had no material to justify them.”[35] They said,

"As a qualified lawyer of four years' standing, he should have known that it was his duty to determine whether there was any proper case to put forward to the court – he could not just act willy-nilly on the basis of his clients' instructions or desires.”[35]

On 30 July 2022, Charles Yeo announced on Instagram that he was seeking political asylum in the United Kingdom.[36] This comes after claims that his various charges were “politically motivated.”[36]

According to reports, he was on bail when he left Singapore, obtaining court permission to travel to Vietnam for work from 27 - 30 July.[36] He then absconded to the United Kingdom soon after.[36] His lawyer, Ashwin Ganapathy from IRB Law, had “no clue” that his client had planned to abscond, and said that he “intends to discharge himself” as Charles Yeo’s defence counsel.[36]

On 3 August 2022, the district court issued an arrest warrant for Charles Yeo, citing that he had breached the conditions for overseas travel while on bail.[37] The Singapore Police Force has also said that they were working with overseas law enforcement counterparts to trace his whereabouts.[37] As of 14 September 2022, Charles Yeo had still not returned to Singapore, and his arrest warrant was thus extended to March 2023.[38]

Charged with contempt of court

Charles Yeo appeared via Zoom video call in a High Court hearing on 29 November 2022.[39] During the hearing, he stated that he was “currently under the protection of the UK government”.[39] He was also charged and convicted of contempt of court by scandalising the judiciary. He had posted two Instagram stories on 14 March 2022, where he implied that “the courts lack integrity and act improperly and with partiality in the discharge of their judicial duties”, said Deputy Senior State Counsel Ng Yiwen.[39]

After he was convicted, Charles Yeo had reportedly sought a fine. The case has been adjourned to 20 January 2023 for sentencing.[39]