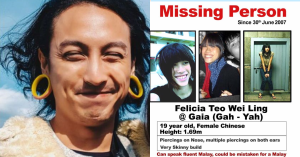 Ahmad Danial Mohamed Rafa’ee (born 1985) is a Singaporean murder suspect accused of killing a fellow Singaporean by the name of Felicia Teo, who went missing in 2007.[1] On 15 December 2020, Ahmad was placed under arrest after authorities uncovered fresh leads on the 13-year-old “cold” case.[1]

According to news reports, he had also been known as “Danial Enemiko” on social media.[1]

Prior to his arrest, Ahmad Danial Mohamed Rafa’ee was a creative manager at the gaming and technology company, Razer Inc.[1]

Ahmad Danial Mohamed Rafa’ee has been accused of murdering Felicia Teo, a 19-year-old student who went missing on 30 June 2007.[2] He had been acquainted with the victim prior to her disappearance.[1][2] 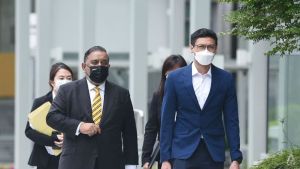 As of September 2022, Ahmad is out on a bail of S$20,000 and is set to plead guilty in court on 14 October 2022.[3] Previously, he had been expected to attend court for such a hearing on 6 July 2022, but had been adjourned due to unresolved matters between prosecution and defence.[4]

On 8 July, Ahmad’s legal team filed for an appeal for his discharge.[5] They pushed their case forward on the premise that the second suspect, Ragil, is still at large. This meant that Ahmad will still face the possibility of being prosecuted for the murder in the future, for “an indeterminate time”.[5]

In June 2022, the court substituted his murder charge with 6 other charges for lesser offences and offered him bail.[5][6] At the same time, it was ruled that Ahmad will be granted a discharge without amounting to an acquittal.[5][6]

He is now faced with charges for 6 lesser offences that largely involve providing false accounts or omitting evidence key to investigations:[5][6]

Arrested and held in remand for investigations (2020)[edit | edit source]

Ahmad was taken into custody on 15 December 2020 and later charged over a video link for the murder of Felicia on 17 December.[1][2][7] He was sporting unkempt hair and wore a grey T-shirt, and appeared to be impassive as his charge was read to him.[1]

Subsequently, he was held in remand at the Tanglin and Central Police Divisions. It had also been reported that his family hired a legal team from Withers KhattarWong to defend his case.[7]

According to court papers, Ahmad and Ragil are believed to have murdered Felicia at the 19 Marine Terrace, sometime between 1.39am and 7.20am on the morning of 30 June 2007.[6][7] Due to the new evidence, he was also accused of “intentionally omitting to give information” on Felicia’s disappearance and death, from the authorities.

While tracing what the authorities believed to be Felicia’s possessions at the time of her disappearance, the investigations pointed to Ahmad as a prime suspect.[2] CID then proceeded to arrest him on 15 December 2020.[2]

During the 2007 investigations, Ahmad and his accomplice, Ragil had once claimed that they last saw Felicia with a “cream-coloured bag containing her Apple laptop and digital camera”.[2]