Wendy Liu Wenyu is the co-founder of the Singapore-based e-commerce company, Ezbuy and the current chief growth officer of LightInTheBox; the company that acquired Ezbuy in 2018.[1][2][3][4] As one of the pioneers of Singapore’s e-commerce industry, she reportedly grew Ezbuy’s customer base from zero to two million customers within three years of co-founding the business.[5][6]

Wendy Liu at a forum. Photo from source.

According to a 2020 article by A Magazine Singapore, Wendy Liu is a naturalised Singapore citizen.[1]

Wendy Liu Wenyu was born in Xi'an, China as an only child. When she was 17, her mother sent her to Singapore to further her studies.[7] Speaking to Channel News Asia about coming to Singapore on her own, she was quoted to have said:

“I was quite a little princess at home... She (Wendy’s mother) hoped that I could be more independent, that’s why she sent me overseas. She hoped that I could explore more things outside of China... Thanks to her decision, I think here I have gained more than I can expect.”[8]

Wendy Liu is an alumna of Nanyang Technological University (NTU), graduating from the College of Engineering with a Bachelor's degree in electrical and electronic engineering, as well as a minor in business in 2009.[1][9] Recalling her tertiary education experience in Singapore, she said:

"During my university days, I took additional business and E-commerce related modules out of curiosity and I found it more interesting than my engineering subjects. This was when I understood the concept behind the convenience and savings consumers enjoyed from online shopping and I knew there was potential to revamp and enhance the E-commerce industry in so many ways."[10]

In 2011, Wendy Liu attained her Master's degree in industrial and systems engineering from the National University of Singapore (NUS).[7][9]

Wendy Liu was the chief executive officer of Ezbuy for eight years before the company was acquired by LightInTheBox in 2018. She then joined LightInTheBox in December 2018 and subsequently served as the acting chief financial officer from March 2019 to July 2020.[11] Since August 2020, Wendy Liu is the company's chief growth officer. 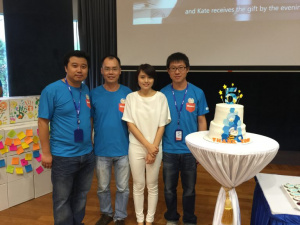 The co-founders of Ezbuy (formerly 65daigou).

Wendy Liu’s idea to begin an e-commerce business emerged after a trip to China, where she was exposed to many Chinese e-commerce platforms and the range of products they were offering. Through the elective modules that she took in NTU, she also learned that e-commerce was already booming in countries like China and America.[7][8]

Wendy Liu established 65daigou in 2010 alongside her co-founders, He Jian, Xue Bin and Qiao Lizhi.[4][12] The "65" in the brand's name denotes Singapore's country code while "daigou" is a Mandarin term that translates to "purchasing on behalf".[13] Wendy Liu shared the following about the challenges that the co-founders faced in the early days of the business:

"... each of us was learning new things every day in order to overcome all kinds of difficulties. For instance, when we were creating the first version of our website, we drew the UI interface ourselves using ‘Paint’, after which we sent it to a third party to have it developed."[13]

65daigou served as a "buy-for-me" platform where customers indicated the items they wanted to purchase, after which Wendy Liu and her co-founders handled the purchasing, packing and shipping processes.[2]

65daigou rebranded as Ezbuy in March 2016.[14][15] Speaking about the company's rebranding to Tech In Asia, Wendy Liu said:

"It (the new name) is the company in a nutshell — what we offer is a quick and easy way to shop online."[16]

In June 2017, Ezbuy reportedly saw traffic of over one million users and made over $8 million in sales from their annual “65eday” sales; the e-commerce platform’s version of the Great Singapore Sale.[17][18]