Wang Lei (born 4 May 1961 as Hong Chin Chiew) is a Singaporean getai singer, actor, show host, and online fish hawker. At the age of 38, he started performing at getai shows to earn additional cash to pay off his gambling debts.[1] Due to the lack of physical getai shows during the current COVID-19 pandemic, he turned to online fishmongering at 59 years old.[2]

Wang Lei was born as Hong Chin Chiew on 4 May 1961. His father was a woodworker and his mother was a housewife. Wang Lei was the fifth of six children, all of whom grew up in poverty.[1]

He dropped out of school at Primary 5 and took up odd-jobs to contribute to his family income, earning on average $900 a month.[3] Some of these jobs included soda deliveries and wet market sales. He has not pursued further education since then. 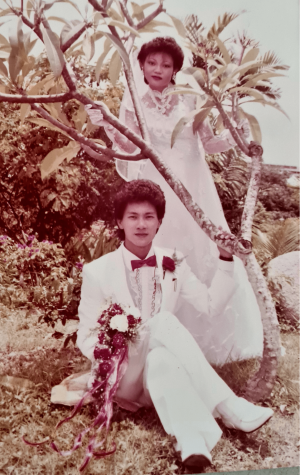 Wang Lei married his wife, Florence Cheng, when they were 23 years old. They first met via phone call where the connections were crossed.[4] Wang Lei was connected to Florence instead of his friend. Florence worked at an electronics manufacturer in the assembly-line department. They have three children together, two daughters and a son.[1] Florence was praised for constantly supporting Wang Lei and helping their marriage persevere through his gambling addiction.[5] 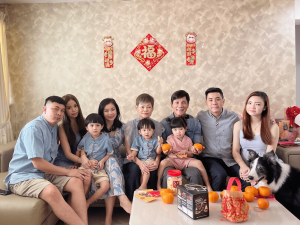 In an interview with 8 Days Singapore, Wang Lei revealed that his gambling addiction had caused a massive rift in his relationship with his eldest daughter causing the pair to ignore each other for a period of 10 years.[6]

He went on to reveal that the cause for this strain had stemmed from a request he had made for her to buy him a car under her name, to which she refused. This had angered Wang Lei into not speaking to her, and this eventually resulted in a cold war that lasted almost a decade.[6]

“I was bankrupt then, so I couldn’t buy a car. But I needed a car, and I asked my elder daughter to buy it and put the insurance under her name. She immediately said no (…) When you have something to ask of your daughter and she says no, your heart will definitely break.”[6]

It was at the age of 11 that Wang Lei purchased his first lottery ticket. He went on to win the third prize of $1,500.[7] After that, the 18-year-old was egged on by a friend to dabble in horse betting, because he had claimed to have insider information.[3] In meWATCH TV series Move On, Wang Lei said,

Fuelled by the desire to escape poverty, he went on to regularly place horse race bets and cruises where he could gamble, but his debts began to snowball.[3] It came to a point where he didn’t have enough money to buy an electronic dictionary for his eldest daughter’s PSLE, and from there, he turned to loan sharks for money. [8]

His gambling addiction led him to continue gambling and borrowing money, in hopes of recouping his losses. This cycle eventually led to bankruptcy where he had his apartment repossessed by a friend he owed money to.[7] He had also taken money from his wife, who was at one point the sole breadwinner of the family. While his mother was admitted to the hospital, Wang Lei stole money that was meant for hospital bills from her drawer.[7] One of his greatest losses was onboard a gambling cruise where he lost $230,000 in a span of three days.[1]

In 2004, Wang Lei tried to quit gambling. While slipping in and out of casinos and gambling dens, he had owed loan sharks over $300,000.[1] In 2013, the passing of his long-time gambler friend, John Cheng (‘Ah Nan’) caused Wang Lei to take quitting gambling more seriously. To pay off debts, he negotiated with loan sharks and borrowed advance salaries from his getai manager. After 33 years of being a serial gambler, Wang Lei finally became debt-free in 2015. He also managed to pay off home and car loans in 2019.[9] 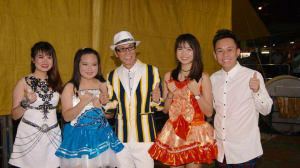 Wang Lei at a getai show in 2017. Photo from Facebook.

In 1998, Wang Lei entered a Hokkien singing competition organised by Marsiling Community Club and was awarded second place.[10] One of the judges, Xie Jinshi, introduced him to the getai scene, marking his debut into entertainment. Getai singers performed song and dance during Chinese festivals like the Hungry Ghost Festival. Hong Chin Chiew earned his stage name, “Wang Lei”, due to his impression of Chen Lei, a famous Taiwanese Hokkien singer.[10] He was earning $5,000 from performing at 150 shows a month.[8]

Wang Lei later became acquainted with Director Jack Neo in 2009, who offered him his first acting role in the movie The Best Bet.[7] He later on starred in several other Jack Neo films such as Ah Boys To Men (the series) and Long Long Time Ago.

Wang Lei, “Fish Selling Bro” in his iconic look - a bandana holding up his silver hair. Photo from Facebook.

Due to the COVID-19 pandemic, Wang Lei was unable to perform at physical getai shows and thus raked in “zero income for 75 days”.[11] One of his friends in the seafood industry expressed his concerns about disruptions in sales due to the pandemic. He asked if Wang Lei could help him boost business during his livestreams.[11] At this time, Wang Lei was only chatting with a small audience, so he was sceptical about the effectiveness of the idea. Nonetheless, he still agreed to lend assistance to his friend.[11] 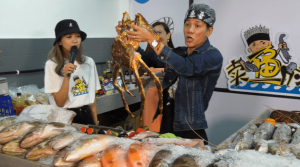 Wang Lei in one of his fishmongering streams in February 2022. Screenshot from Facebook.

During an interview with Sure Boh Singapore, he revealed his strategy for attracting crowds, saying that he “started cracking jokes, dirty jokes”.[11] Wang Lei attributes further stream successes to his quick wit at answering comments asking rhetorical questions.

Wang Lei in one of his fishmongering streams in February 2022. Screenshot from Facebook.

He has earned the moniker, “卖鱼哥 (Fish Selling Bro)” through comedic methods of hawking seafood products.[13]

Wang Lei took it upon himself to research on the type of fish he was selling as well as delivery methods.[14] Beyond livestream sales, he has also set up an online store retailing these seafood products. He engages Grab drivers to perform the deliveries.

“Not only was I able to help the fishermen, but I also helped the Grab drivers with income.”[14]

“Fish Selling Bro” has since caught the attention of international audiences. Wang Lei’s fishmongering streams have been shared on Chinese social media platforms like Douyin, and ranked 18th on Weibo’s trending videos.[13] Show Lo, Taiwanese singer and actor, has also sent messages of encouragement to Wang Lei for “bring(ing) joy to everyone”.[15]

Wang Lei has been cast in several movies directed by Jack Neo. He has also been appointed as Asia Momentum Media Entertainment’s first ambassador.[19] 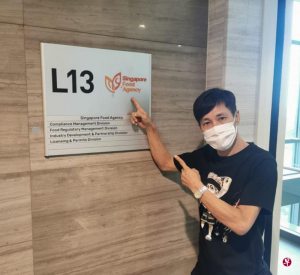 Wang Lei at the SFA. Photo from Zaobao.

Investigation by SFA for hygiene violation during fishmongering livestream (2020)

During one of Wang Lei’s livestreams as “Fish Selling Bro”, he received a complaint for not handling fish without gloves.[65] He was brought in for questioning by the Singapore Food Agency for four hours. Wang Lei took to Facebook in a complaint post, retorting how he was questioned for “not using gloves in his own home”.[66]

The ‘Fish Selling Bro’ logo designed by a Malaysian fan. Photo from Facebook.

Wang Lei’s newfound success in the seafood industry as “Fish Selling Bro” was marked by his logo. Designed by a Malaysian netizen, James, in April 2020, the logo includes Wang Lei’s moniker, “Fish Selling Bro”.[67] In July 2020, he had hopes of launching “Fish Selling Bro” products such as pillows and coffee and thus applied to trademark his logo. However, a Chinese businessman had already filed for the same trademark in China, meaning that Wang Lei could not expand his business there.[68] Later in June 2021, it was reported that Wang Lei had spent a five-digit sum in a lawsuit to reclaim his trademark.[69]

On his 60th birthday, Wang Lei hosted a party and released photos of party guests on Facebook. A headcount by The Independent saw at least 17 people in attendance, more than the legal gathering limit at that time.[70][71]

Wang Lei was announced to appear at the Singapore Writers Festival 2021: Vanishing Trades.[72] The event took place on 6 November 2021, as a Mandarin panel where guest speakers discussed their line of work. Singaporean authors responded to the news with displeasure. Wang Lei was known for swearing in his fishmongering livestreams, to which local authors felt was mismatched with the prominence of the event.[73]

Nonetheless, he received support from fans who posted messages of encouragement and congratulations on Facebook.[74] One redditor, u/kuang89, added onto a thread discussing Wang Lei’s appearance, reminding netizens that the panel’s purpose was to discuss local art forms at risk of disappearing.

“... Whether you think he’s crude or not, he is a key person in a variety of dying trades, he manage to be more popular selling fish than busty girls doing live stream where everyone thinks looks matters. He has his ups and downs in life, his human experiences alone are stories.”[75] 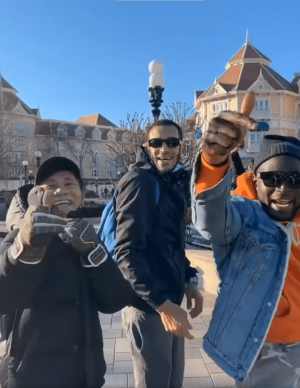 Wang Lei with foreigners in Paris. Screenshot from Facebook.

On a family trip to Paris, Wang Lei met some foreigners and taught them a few Singaporean phrases.[76] Some of these phrases were Hokkien vulgarities. He posted videos documenting his time in Paris with these foreigners.[77] Locals and netizens expressed their disapproval about his behaviour and commented that he had “soiled the image of Singaoporeans”.[78] To this, Wang Lei said that he “felt betrayed by the local press” for not highlighting a positive image instead.[79] 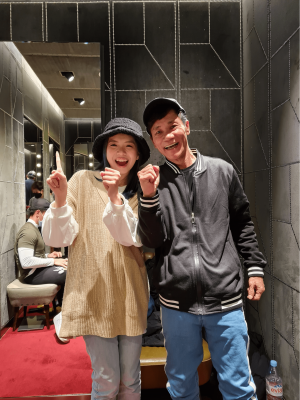 Wang Lei and Jayner Teh at a Gucci store in Paris. Photo from Facebook.

On the same trip, Wang Lei hosted a livestream in a Gucci outlet to promote their goods online. Within two hours, he was able to sell $1 million worth of products.[80] The proceeds of the sales were given to aid 1,000 low-income families.[81] Despite the act of charity, Wang Lei felt slandered by local news for focusing on him teaching foreigners vulgarities, instead of his good deeds.[82]