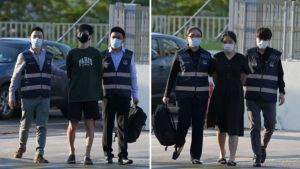 A photo of Pi Jiapeng and Siriwipa Pansuk after being handed over to the Singapore Police from Malaysia. Photo from CNA.

The Tradenation luxury goods scam was a widely-reported scam that took place in Singapore in 2022. The scam involved a Singaporean and Thai National couple, who had allegedly fled with S$32,000,000 from over 200 people over luxury goods orders. As of September 2022, the couple have been arrested and are currently awaiting trial.

In early July 2022, Shin Min Daily News first reported on how a couple were accused of scamming over S$32 million from hundreds of people across half a year.[1]

Through their registered business named Tradenation, the couple collected money from interested parties in exchange for luxury watches, on the understanding that the arrangement was on a consignment basis.[2] Subsequently, the couple became uncontactable, and over 180 police reports were issued against them and their two companies, Tradeluxury and Tradenation.[3] Following the reports, the Ministry of Law suspended the companies’ registration while investigations were ongoing.[3]

The couple were arrested on 10 August 2022, at a budget hotel called BookMe Hotel in Johor Bahru.[4] Previously while out on bail, the couple had allegedly fled Singapore on 4 July 2022, by illegally hiding in a container compartment of a lorry, with the help of a Malaysian man.[5] It was believed that the pair had crossed over to Malaysia and eventually reached Thailand.[4] The Singapore Police Force also highlighted that warrants of arrest and Interpol red notices have been issued against the couple.[6] 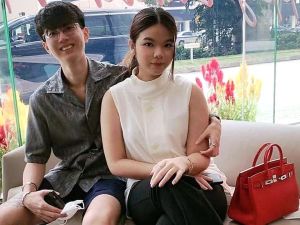 A photo of Pi Jiapeng and Siriwipa Pansuk. Photo from Style On The Dot.

The couple behind the scam were identified to be 26-year-old Singaporean Pi Jiapeng (also known as Kevin), and 27-year-old Thai National Pansuk Siriwipa (who goes by the name Ann).[4] According to reports, Jiapeng used to be a shoe salesperson, while Pansuk was more affluent and allegedly bought Jiapeng a sports car.[4]

In an interview with CNA on 27 July 2022, two victims of the scam revealed how the couple operated by cheating people of their money. They explained how similar victims like them had first contacted Tradenation on Carousell, subsequently meeting Jiapeng and Pansuk to collect their first watch.[7] They continued to meet victims after their initial purchases, with the latter gradually entrusting more money to the couple after being pressed to purchase more things from them.[7] Eventually, the couple became uncontactable, which led to police reports being launched against them.

After five weeks on the run, Jiapeng and Siriwipa were arrested and brought back to Singapore.[8] According to reports, the Singapore Police Force had been working closely with various foreign law enforcement agencies, and they had received information from the Royal Thai Police that the couple was staying in a hotel in Johor Bahru.[9]

The Singapore Police Force then subsequently sought the assistance of the Royal Malaysia Police to locate Jiapeng and Siriwipa, and the couple were arrested and handed over to Singapore on the evening of 11 August 2022.[10]

Charges for conspiring to cheat and absconding[edit | edit source]

Both Jiapeng and Siriwipa face three charges each: two counts of conspiring to cheat and one count of illegal departure from Singapore.[11]

According to reports, this was not the first time Siriwipa had been involved in such a scam. She had allegedly previously fronted a five-man business team on Instagram which helped people pre-order cosmetics and other branded items.[12] Similar to Tradenation, she initially delivered the goods to the victims which gained their trust, but subsequently disappeared with their money when they had increased the amount given to her.[12]

On 19 August 2022, it was reported that Jiapeng and Siriwipa would be remanded for another week, following the prosecution’s citation that the case was a complex one and thus required more time to ascertain the full details of the case, such as the whereabouts of the money received by the two companies.[10] They are next scheduled to appear in court on 26 August 2022.

In addition, two Malaysian men who were alleged to have helped the couple flee Singapore indicated in court that they intended to plead guilty.[14]