On 13 August 1902, a tiger was sighted under Raffles Hotel’s Bar & Billiard room. At the time, Raffles Hotel's Bar and Billiard room was an elevated building. The space where the tiger hid was a storage space for empty boxes and crates.[1] The tiger was shot dead by Mr Charles McGowan Phillips who was then the headmaster of Raffles Institution. 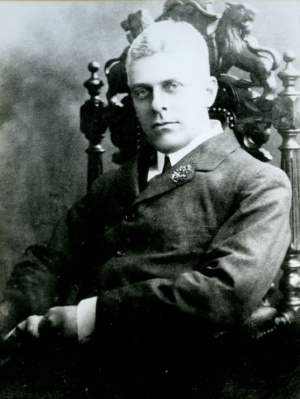 Charles McGowan Phillips (pictured) was the man who shot the tiger at Raffles Hotel. Photo from Raffles Rampage.

In 1902, Raffles Hotel was a beach-front hotel located along the aptly-named Beach Road. The tiger reportedly belonged to a local circus show that had been performing in the area. After escaping from the circus, the tiger purportedly made its way to the now-defunct Singapore Volunteer Corps Drill Hall. The drill hall was located directly opposite Raffles Hotel and Beach Road separated the two buildings.[2] There, it got on a tongkang (a type of light wooden boat used to carry goods in the early 19th century along rivers in Southeast Asia) that had been moored near some reclamation works.[3]

The tiger was said to have scratched a watchman before presumably swimming up the Singapore River. From there it headed to Raffles Hotel.[4]

The tiger was not sighted until the closing hour of Raffles Hotel’s Bar and Billiard room. The bartender’s helper spotted the tiger staring through the low verandah railing on the hotel side of the Billiard room.[5]

The bar boy then hid under the counter. After realising that the tiger did not intend to attack him, he left the Billiard Room and locked it up before alerting the hotel manager. The tiger rested under the Bar & Billiard Room for the night.[6]

The hotel manager requested Mr Charles McGowan Phillips, then the headmaster of Raffles Institution and a member of the Singapore rifle team, to shoot the tiger. Mr Phillips was initially reluctant as he was tipsy from an earlier function. After realising that it was a matter of life and death, he complied. Mr Phillips left for Raffles Hotel still dressed in his pyjamas and “armed with his Lee-Enfield rifle and a few hollow-nosed (Mark IV) cartridges”.[7][8]

When Mr Phillips arrived at the Raffles Hotel, the tiger was still under the billiard room floor. When he thought he spotted the tiger, he fired three rounds all of which missed the tiger. After taking aim again, he reportedly fired a bullet right between the eyes of the tiger. The tiger fell on its side and was shot once more before being declared dead.[9] The tiger reportedly measured 7 feet 8 inches (2.34 metres) from tip to tip and had a height of 5 feet and 4 inches (1.63 metres).[10] 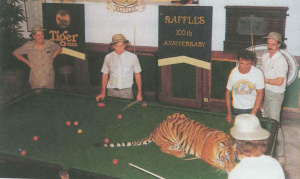 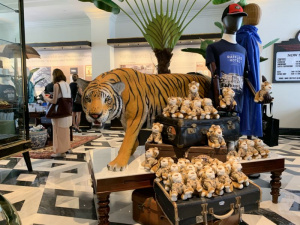 In 1986, a live tiger was brought into the Raffles Hotel’s billiard room to celebrate the hotel’s 100th anniversary. Organised with Tiger Beer, the celebrations were a year early to coincide with the Year of the Tiger.[11] Raffles Hotel also sells tiger plush toys to commemorate the event.

The incident in 1902 has also been retold over the years in Singapore's media and literature.

In 1980, Felix Chia wrote a short story titled ‘Curiosity Kills The Big Cat’. The story was based on the 1902 tiger shooting at Raffles Hotel. The story was featured on The Straits Times and took on the perspective of the tiger named Rimau.

In the story, Rimau had been attracted to the tick-tock sound coming from the grandfather clock in the Bar and Billiard Room. He leapt into the room and looked at the pendulum in the grandfather clock from under the billiard table. However, he was frightened away by the chiming of the clock but still returned the next night.

While Rimau was under the billiard table, he suddenly saw humans surrounding the table for a game. Rimau remained silent under the table but was frightened again by the chiming of the grandfather clock. He let out a roar that revealed his presence to the humans. He snarled and growled at the humans until one of them lifted a gun and shot him right between the eyes, killing him immediately.

In the story, Muthu, a billiard player, had spotted the tiger and spread the news much to the scepticism of several guests. However, a hungry roar soon proved Muthu’s point. Mr C. M. Phillips, who was nearby, grabbed his double-barreled shotgun and headed to the hotel with a heroic sense of urgency. He was said to have ordered a cold pint of Tiger Beer at the bar, which gave his body “the once over”, before confronting the tiger.

The story theorised that the tiger either came from across the Causeway or escaped from a visiting circus. Most people agreed that the tiger had merely wandered out of its home in the nearby jungle. The advertisement closed by asking the readers to think of a tale before meeting their friends for a drinking session, as Tiger Beer is “best enjoyed with a long glass and a tall tale.”