The Tiger beer logo when it was first produced and distributed in Singapore in 1932. 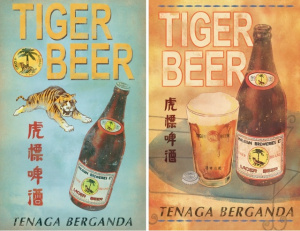 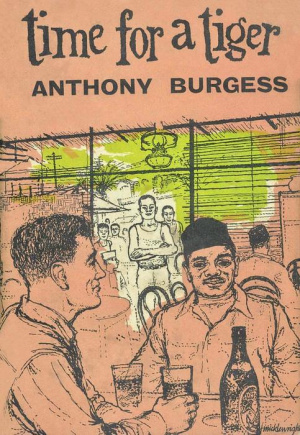 The 1956 novel by Anthony Burgess titled "Time for a Tiger". Photo from Localbooks.sg. 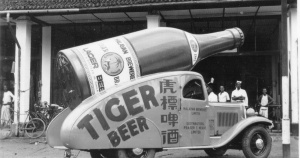 A promotional vehicle for Tiger Beer. Photo from MyCommunity.

Discussion for setting up a brewery in Singapore happened between 1929 and 1930.[1] Having been rejected in their efforts to set up a brewery in Indonesia by the Dutch administration in 1929, Heineken came to Singapore. Together with Fraser and Neave (F&N), Heineken launched Malayan Breweries in 1931.[2] On 3 October 1932, Tiger Beer was first introduced to the Singapore market by Malayan Breweries.[3] According to newspaper reports at the time, free Tiger Beer had been given out at Malayan Breweries on the weekend of the launch.[4] At the time, the brewery was located at Alexandra road.[5]

In 1940, Tiger Beer was attributed as the main product that brought Malayan Breweries its then "record profit" of $278,607.97.[6] The chairman of Malayan Breweries at the time commented that Tiger Beer's popularity was due to its quality and affordable price.[7] In November 1939, Tiger Beer performed well against other international beer brands in a competition, achieving "the second prize". Since 1933, Malayan Breweries had faced competition from Archipelago Brewery Co. (ABC) which started producing Anchor beer.[8] The brewery had been set up by the German company, Becks. When World War II broke out in 1939, the British government of Singapore labelled ABC as enemy property due to its German roots.[9] In 1941,[10] Fraser and Neave together with Heineken successfully bought over Archipelago Brewery.[11]

During the Japanese occupation in Singapore from 1942 to 1945, Malayan Breweries was temporarily renamed Kirin Beer Kaisha.[12] The price of Tiger Beer increased slightly in 1942. It was reported that the price of a dozen quart bottles of Tiger Beer cost $6.60 and a dozen pint bottles cost $3.96.[13]

After Japanese occupation ended in 1945, control over Tiger Beer returned to F&N and Heineken in September the same year.[14] Post World War II, a number of beer companies went out of business or manufactured beer using cheaper ingredients due to limited resources. In Tiger Beer's post-war advertisements, it was emphasized that Tiger Beer maintained it's "FULL STRENGTH Pre-War Quality".[15] Tiger Beer's strong advertising continued into the 1950s. The brand's advertising catchphrase “There's always time for a Tiger” became well known. British author Anthony Burgess, known for his work A Clockwork Orange (1962), named his 1956 novel after the slogan.[16] In 1973, Tiger Beer broadcasted its first-ever television commercial (YouTube video). Titled "Earthquake", the one-minute commercial takes place in a coffee shop setting where some customers are enjoying Tiger Beer despite an ongoing earthquake. The commercial ends with the line "Nothing can shake a Tiger drinker. Tiger, it's in the beer".[17]

On 9 April 1960, a ceremony was conducted at Malayan Breweries to celebrate the new addition of a canning plant at the Tiger brewery.[18] Due to the increasing consumer demand for Tiger Beer, Malayan Breweries decided to step up production by investing in a canning line that had a capacity of 300 cans per minute.[19] This new and improved canning line was set up in 1965.[20] Experiments for canned Tiger Beer actually began in 1936 as a show of support for the Malayan tin industry.[21] Malayan Breweries tested Tiger Beer that had been transferred into American imported cans against bottled Tiger Beer across the span of 2, 4, 6 and 8 weeks.[22] However, the initiative did not take off due to added taste that the tin lining imparted onto the beer itself.[23]

After close to 70 years at the Alexandra road brewery, the main production hub for Tiger Beer was relocated to Jalan Ahmad Ibrahim at Tuas in 1990.[24] The new manufacturing site cost approximately S$200 million to build.[25] In the same year as the relocation, Malayan Breweries was renamed Asian Pacific Breweries (APB).[26]

As of 2019, Tiger Beer holds factory tours at the Jalan Ahmad Ibrahim brewery (closest MRT station Joo Koon). The tour is available from Tuesday to Sunday with 5 sessions timed at 1 pm, 2 pm, 3 pm, 4 pm and 5 pm.[27]

In 2012, Fraser and Neave (F&N) agreed to sell Asia Pacific Breweries (APB) to Dutch company, Heineken at S$7.9 billion.[33] Initially, there was stiff competition between Heineken and Thai tycoon Charoen Sirivadhanabhakdi for the management and ownership of APB, and therefore the right to distribute Tiger Beer. The Thai Tycoon owned Thai Beverage which was Southeast Asia's second-biggest brewer at the time.[34]

However, on 19 September 2012, Charoen pulled out of the business war and pledged his support towards Heineken.[35] More than a week later, all F&N shareholders gave their consent for the takeover of APB by Heineken.[36] Since 1931, APB (then called Malayan Breweries) had been a joint venture between Heineken and F&N. At the time of the bidding war for APB, Heineken held a 56% stake in APB with F&N holding 40%.[37] 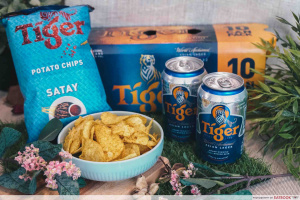 The Tiger Beer satay chips that were only available for a limited time period in 2018. Photo from Eatbook.sg.

In 2010, APB launched Tiger Beer's second flavour called “Tiger Crystal”. It was initially launched in Malaysia in March and subsequently distributed in Singapore in December.[38] The beer is made from malted barley and yeast and brewed using a special method called “Cold Suspension” where the beer is strained at a temperature of -1 degree Celsius.

"Tiger Radler" was released in 2013. Radler beer is known in Germany as "cyclist beer" and the name was inspired by an old story.[39] As one version of the story goes, 13,000 cyclists once patronised a bar owned by Frank Xaver Kugler in June 1922. The owner mixed lemon juice into the beer to ensure there was sufficient amount for everyone to consume. "Tiger Radler" contains similar ingredients to the original Tiger with the addition of natural lemon juice. Different fruit flavours such as mandarin orange, grapefruit and orange mango were also introduced for a period of time. In 2016, Tiger Beer introduced “Tiger Black” and “Tiger White” at a pop-up event at Beerfest Asia.[40] After a year, Tiger Beer officially released the two flavours permanently to the consumer market. “Tiger Black” is a type of black beer that is steeped with Asian black rice while “Tiger White” is a type of German wheat beer infused with coriander, clove and citrus.

Tiger Beer forayed into the snack industry in 2018 with its “Satay Potato Chips”. The chips were initially sold in Malaysia at the start of the year and later promoted in Singapore in October. The snack was only available in Singapore for a month.[41] 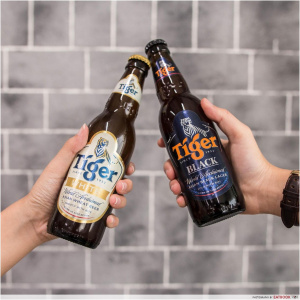 Tiger White (left) and Tiger Black (right) that were released in 2016. Photo from Eatbook.sg. 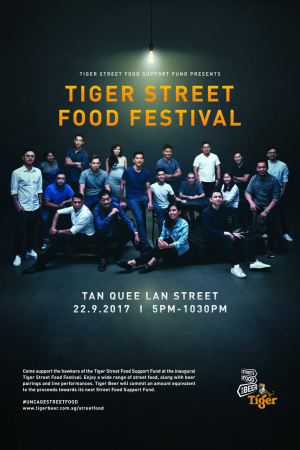 In 2017, Tiger Beer collaborated with World Wide Fund for Nature (WWF) to start a campaign called “3890 Tigers”. The campaign stood for the cause of protecting wild tigers from becoming extinct. The campaign was slated to last for 6 years. Tiger Beer also donated US$1 million to Tx2, a movement aimed to increase the tiger population by 2 times by 2022.[42]  A site was also created for members of the public to take an oath to protect tigers. Beyond Singapore, the campaign was also publicised in Malaysia, Cambodia, China, Hong Kong, Russia, the US and New Zealand. Within 8 weeks, the movement received a response of more than 32,000 oaths.[43]

In 2018, Tiger Beer worked with WWF and Kenzo to create a clothing line titled “Rare Stripes” (promotional YouTube video). The line was sold at Ginza Six in Tokyo. The coats were designed by 4 illustrators, printmakers and visual artists from Cambodia, Malaysia, Singapore and the United States. The coat hangers were made of snare wire that is normally used for hunting wild tigers. All profits went to the WWF organisation.[44] Later in the year, Tiger Beer launched “Tiger Roar” in Seoul, South Korea. The event comprised of live performances, fashion and art shows, and light showcases.[45] Notable guests such as fashion designer Amos Ananda Yeo, visual artist Jee Young Lee and musical artist Roxxxan were present at the event.[46]

In April 2016, Tiger Beer initiated the “Tiger Beer Street Food Movement”. The campaign aimed to promote hawker culture in Singapore and motivate locals to show their appreciation to the hawkers.[47] In conjunction with the campaign, Tiger Beer organised pop-up food courts at the ground levels of public housing estates between 20 April and 18 May.[48] Tiger Beer also sponsored videos that featured inspiring hawkers in Singapore.[49]

In early 2017, 25 new hawkers were given donations of up to S$10,000 each from the Tiger Street Food Support Fund to help set up their businesses.[50] The Tiger Street Food Festival was held at Tan Quee Lan Street in 2017 and The Deck on Prinsep Street in 2018. The festival aimed to raise funds to support the newer generation of Singaporean hawkers. The event consisted of food stalls from hawker centres as well as live performances. In 2018, Tiger Beer invited Gail Belmonte, a former finalist on the China Super Vocal 2016. Through the event, Tiger Beer raised S$72,000 in 2017[51] and S$11,238 in 2018.[52]

In May 2016, Tiger Beer launched “Tiger Jams” in Malaysia and Indonesia. The campaign was a platform for aspiring musicians to work with established musicians in Asia such as ToNick from Hong Kong, The Sam Willows from Singapore and musical group PolyCat from Thailand. Videos of the competition were uploaded on the internet and members of the public were able to select their favourite musical collaboration.[53] A private concert was held on September 2 at Rhapsody Square, TREC Kuala Lumpur where artistes such as Son Of A Policeman (SOAP), Rozella, Donamarie and CHVRCHES were invited to perform on stage.[54]