Tan is also known to film her victims with her smartphone while she makes the remarks, thereafter uploading the recorded videos onto her personal YouTube channel.[2]

According to Tan, she had graduated from Hwa Chong Institution and Calgary University in Alberta, Canada.[1] No further details of her academic career with both schools were divulged.

Tan was hired as an associate with Knight Frank Property Network Pte Ltd. Her employment with the network has since been terminated.[3] In a statement that it posted on Facebook, the network asserted:

“The company maintains zero tolerance for hate speech and racism that threatens the foundations on which Singapore is built.”[3]

Alleged displays of racism and classism in Singapore (2021) 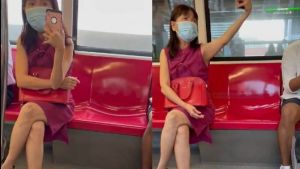 On 21 April 2021, Twitter user Ryan Kalmani shared a video recording of Tan questioning and belittling other commuters about their race and education on an EWL MRT train.[1]

In the video recording, Tan can be seen holding up an iPhone, presumably to film the commuters around her. The recording starts off with her proclaiming that she was from Hwa Chong and Calgary University before asking other commuters “which JC [they’re] from.”

Tan proceeded to ask another commuter for her race. When the commuter asked why she wanted to know her race, Tan replied:

The ‘them’ Tan referred to were Kalmani and his Malay friends. When the commuter replied that she was a Malay, Tan said: "Malay, is it? Okay, no wonder." Tan then announced the job positions of some of her family members - her brother-in-law was a “chief executive officer” and her nephew was a “lawyer” - before telling Kalmani, the person filming the video, the following:

“Tell the police why I need to hang out with you guys.”

Tan then went on to count the number of Malays sharing the same carriage as her and later claimed that she was harassed by the commuters.[2] She was also noted for mistaking a Filipino who later boarded the train for a Malay. 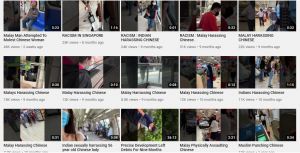 Screenshot of Tan’s YouTube channel before it was taken down. Photo from Hardware Zone Forum.

Police investigations were underway by 27 April 2021, with a police spokesperson confirming that multiple police reports had been lodged with Tan assisting them in their investigations.[2]

Shortly after Tan went viral on social media, her YouTube channel was discovered and shared on Facebook by Darren Mak on 26 April 2021.[4]

Tan’s YouTube channel, which has since been terminated,[5] was home to a total of 29 video uploads that dated back to December 2016.[2] Of this number, 28 clips bore titles that suggested that Tan was the victim of racism and harassment by members of the public.

Some of these clips had names like "Malays Harassing Chinese" and "Indian sexually harassing 56 year old Chinese lady". However, the clips themselves recorded no such acts of aggression, apparently only showing people going about their daily lives. 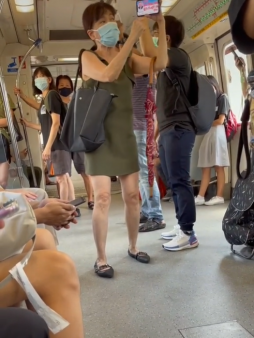 Tan’s face was also visible in a number of the clips, where she was seen verbally accusing the people around her for being racist and harassing her.

Second viral incident on another EWL MRT train (11 May 2021)

On 11 May 2021, TikTok user Lee Sin Yee shared a video recording of Tan being a public nuisance on another EWL MRT train.[6] In this incident, Tan can be heard clarifying that she was not racist. Instead, she claimed to be classist, as she did not speak to working-class Singaporeans:

“I even told the police, okay, I don’t even talk to Chinese rank-and-file like you, so I can’t be racist. If I don’t talk to them, don’t expect me to talk to you.”[6]

Similar to the first viral incident, Tan also announced the prestige of her family members. According to her, her brother-in-law was a “millionaire” and two of her nephews were “studying law.” She could be seen holding up a smartphone and zooming in on their photos as she did so.

On 18 June 2021, Tan was called before a district court and handed two charges for allegedly being "prejudicial to the maintenance of harmony between different racial groups."[5] She was also given one charge for being a public nuisance.

Consequent to these charges, Tan was remanded at the Institute of Mental Health (IMH) for psychiatric observation. Her case was then adjourned to 2 July 2021.[5]

On 2 July 2021, Tan attended another district court hearing where she was offered a bail of $5,000. She was represented by lawyer Sng Pheng Huat.[7] While he informed the court that Tan’s IMH report had been prepared, its contents were not disclosed. 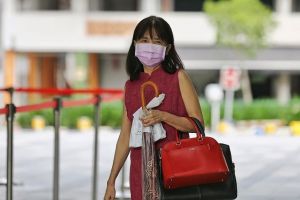 Tan leaving the district court after she was offered bail. Photo from The Straits Times.

Sng also asserted that he would attempt to make representations to determine whether the prosecution would agree to issue a mandatory treatment order (MTO) for Tan.