Soo Kok Leng (born 1953) is a veteran Singaporean businessman who has helmed the boards of several corporate companies such as JTC Corporation, CapitaLand Commercial Trust and Temasek Management Services.[1][2] He had also served as Singapore's ambassador to the Republic of Austria for ten years.[3] In recognition of his public service contributions, Soo Kok Leng was conferred the Public Service Medal and the Public Service Star in 2006 and 2017 respectively.[4][5] 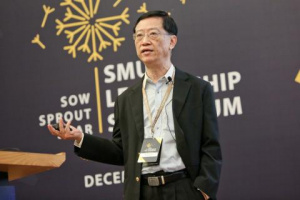 Soo Kok Leng pictured at a leadership symposium in 2019. Photo from source.

Soo Kok Leng has decades of experience in the corporate world, with a portfolio ranging from human resource management to business administration. Speaking at a 2019 ST Book Club event that was held in conjunction with the launch of his first book, he said:

He has also been invited as a keynote speaker and panelist at several symposiums and seminars over the years.[7][8]

Soo Kok Leng began his career in 1977 as an engineer in Hewlett Packard (HP).[10] He worked for HP for about 20 years, having risen through the ranks to become the company's Director of Human Resource by 43 years old.[11]

Upon leaving his first job at Hewlett Packard (HP), Soo Kok Leng shifted his area of expertise to business administration and has since held senior positions across various companies. Notably, Soo Kok Leng served for more than 15 years as the Chairman of Singapore Technologies (ST) Electronics.[12] In 2016, Kwa Chong Seng, the then-Chairman of ST Engineering, spoke about Soo Kok Leng's long service at ST Electronics. He said:

"On behalf of my fellow Directors and Management, I would like to acknowledge with deep appreciation, Guong Ching and Kok Leng’s vital contributions and valuable insights to the respective Boards."[12] 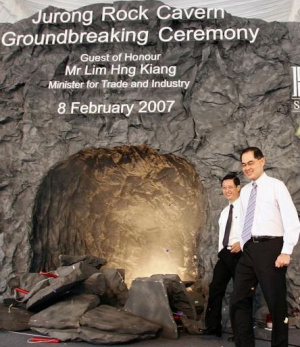 Soo Kok Leng (second from right) pictured in 2007 when he was the Chairman of JTC Corporation. Photo from source.

The following is a list of Soo Kok Leng’s key board appointments over the years.

In January 2000, Soo Kok Leng was appointed as a Director of the industrial management company, JTC Corporation. In January 2004, he was appointed as the Chairman of the company. During his tenure at JTC, Soo was involved in key projects such as the Jurong Rock Caverns[18] and One-north, a research and development-based cluster in Singapore.[16] Soo Kok Leng had reportedly said the following about the Jurong Rock Caverns project:

"The development of the underground hydrocarbon storage cavern at Jurong Island is a strategic project that will further enhance the cluster concept and bring even more benefits to Jurong Island companies."[19]

Soo stepped down from both his leadership roles at JTC in December 2007.[16] 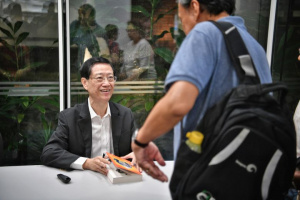 Soo Kok Leng is also a published author. He released his first book, Think Wits Win: How To Use Sun Zi’s Art Of War For Success in July 2019.[20] The book was based on a military treatise titled The Art of War which was written by the ancient Chinese military strategist, Sun Zi. Soo Kok Leng's book spoke about how Sun Zi's war tactics could be applied to the business world.[21] In a 2019 interview with The Straits Times, Soo recalled using one of Sun Zi’s strategies to help mediate negotiations during his tenure at HP:

“Sun Zi said (winning a war can be) a numbers game. We must divide and conquer. We were about to have a union party, only for members. So I told him (lead negotiator)...why don’t I help you make the union party the best ever? So that your members will be the envy of the non-members, then they will see a reason to join the union.”[20]

According to a 2019 report by The Straits Times, Soo Kok Leng had been giving workshops about Sun Zi for over 20 years.[6] Published by the Straits Times Press, Think Wits Win: How To Use Sun Zi’s Art Of War For Success retails at S$30 as of November 2020.[22]

From 2007 to 2018, Soo Kok Leng was an adjunct professor at the National University of Singapore (NUS). He was a part of the NUS Division of Engineering and Technology Management, educating students on interdisciplinary research and technological innovation.[10]