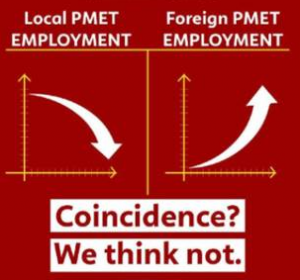 Through this image, the SDP insinuated that Singaporeans are losing their jobs to foreign talent. Source.

The Singapore Democratic Party (SDP) is a political party in Singapore. Their article titled “SDP Population Policy: Hire S’poreans First, Retrench S’poreans last” and two Facebook posts were found to have contained falsehoods. Additionally, the SDP had paid for both Facebook posts to be boosted as advertisements.[1] Under the POFMA (Protection from Online Falsehoods and Manipulation Act), SDP was ordered to correct the false statements.[2] In 2019, there were four cases of POFMA corrections involving Brad Bowyer, States Times Review, Lim Tean and SDP.

The SDP article and Facebook posts had false claims about PMET (Professionals, Managers, Executives and Technicians) employment in Singapore. They insinuated that local PMETs were losing their jobs to foreigners. The Ministry of Manpower (MOM) released data from employment surveys that debunked the following allegations. 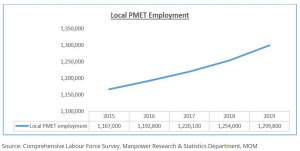 There is a constant upward trend in local PMET employment from 2015 onwards. Source. 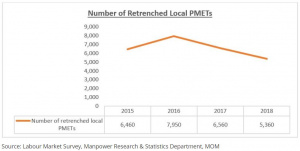 There is a downward trend in local PMET retrenchment from 2016 onwards. Source.