Sheik Farhan bin Sheik Alau’ddin was born in 1997.[1] He is the son of Sheik Alau’ddin, a two-time world champion in pencak silat and the chief executive officer of the Singapore Silat Federation.[2] Sheik Farhan is the fourth out of six children, and his siblings are also involved in the sport of silat.[3] His brother Sheik Ferdous is a fellow silat world champion, having won the World Pencak Silat Championships in December 2018 and his sister Nur Shafiqa competed at the 2015 SEA Games, obtaining a bronze medal.[4][5] 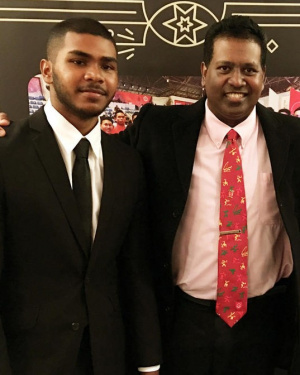 As of January 2021, Sheik Farhan is a two-time world champion in the competitive sport of pencak silat, having won the World Pencak Silat Championships in 2015 and 2016.[2][8] He is also a gold medalist at the Southeast Asian Games (SEA Games), having won in 2017. Pencak silat, globally referred to as silat, is an Indonesian martial art in which practitioners use their limbs to strike, grapple and throw their opponents.[9]

Growing up, Sheik Farhan watched his father, two-time silat world champion Sheik Alau’ddin, carry out his training sessions at Jalan Besar Community Club.[10] Naturally, he picked up the sport as well, eventually winning a junior silat competition at the age of seven.[11] Speaking to Channel News Asia about his experience with silat as a child, he was quoted as having said:

“Silat was just a part of my routine since I was very young, maybe a toddler.”[11]

“Farhan had no problems with his match. Overall I’m very happy because of the performance of athletes and the team behind them, everyone has been excellent.”[12]

In August 2017, Sheik Farhan participated at the 29th SEA Games in Kuala Lumpur, Malaysia where he won his first SEA Games gold medal with a 5-0 win over Malaysian Khairul Yaacob.[9] In a 2015 interview with The Straits Times, he elaborated on his thoughts during his gold medal match:

“Out there, it's not just you and your opponent. There's also the judges and you have to look confident, which is why I did the No. 1 sign. There's no room to be timid. I never want to show my opponent how I'm feeling. All I'm focused on is thinking about what to do next to make sure I win.”[9] 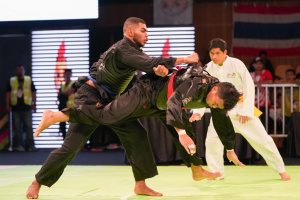 Sheik Farhan pictured in his match against Khairul Yaacob at the 2017 SEA Games.

The following is a list of podium finishes Sheik Farhan has attained over the years. 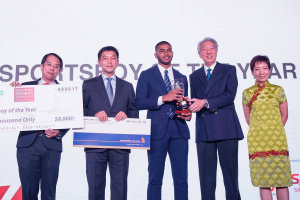 Due to his success in the sport of silat, Sheik Farhan has been the recipient of several awards over the years. The following is a list of awards he has received.

In November 2019, Sheik Farhan was the recipient of the Singapore Youth Award, the country’s highest accolade for youth who have risen to the top of their craft and brought honour to the nation.[14][15]

In August 2017, Sheik Farhan was named Sportsboy of the Year at the Singapore Sports Awards, the country’s annual awards ceremony to recognise and honour the achievements of its sporting individuals and teams.[16][17]

In August 2016, Sheik Farhan was the recipient of the Berita Harian Young Achiever Award, an award given to Muslim and Malay Singaporeans aged 30 and below that have excelled in their respective field of work or study.[18]