Phoon Chiu Yoke (born 1968), also known as the Badge Lady, is a Singaporean woman who gained notoriety for not wearing a mask in various public places and breaching her Stay Home Notice (SHN).[1] Phoon earned the “Badge Lady” moniker after a viral video (dated 15 May 2021) showed her asking a safe distancing ambassador (SDA) for a badge when advised to put on a mask.[2]

Career in the Navy[edit | edit source] 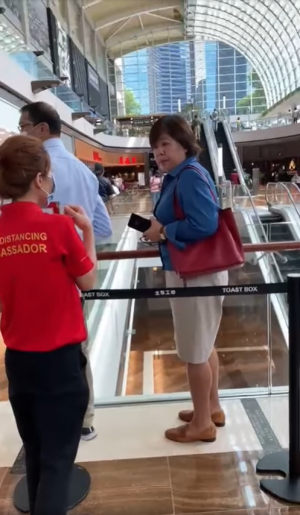 Phoon was approached by a Safe Distancing Ambassador at Marina Bay Sands. Screenshot from Prince Shawn on Facebook.

Phoon first came into the spotlight when a Facebook video posted by Prince Shawn on 15 May 2021 showed her expressing open defiance towards an SDA when advised to put on a mask.[2] In response to the SDA’s entreaties, Phoon questioned her authority:

“Do you have a badge? If you don’t have a badge, why are you asking me to do something? Who are you representing?"[2]

It was this statement that earned Phoon the “Badge Lady” or “Badge Woman” nickname on social media. At the end of the video, Phoon is seen inserting a blue disposable mask into her right skirt pocket.

On the same day that Phoon’s video surfaced on Facebook, the Singapore Police Force (SPF) launched an investigation after receiving a call for assistance at 5:15pm.[5] Phoon was then investigated for what SPF described as “public nuisance and breaching safe distancing measures.”

Phoon’s breach of local COVID-19 regulations was not isolated to the incident at MBS. Below is a breakdown of the other COVID-19-related offences she is known to have committed.

A report by The Straits Times on 19 May 2021 revealed that Phoon had a pending charge for going maskless “at all times” at Newton Hawker Centre from 7.20pm to 8pm on 8 May 2020.[6] Phoon had committed this offence during Singapore’s circuit breaker period, which lasted from 7 April to 1 June 2020.

Phoon is known to have departed Singapore for Britain some time after.[7] 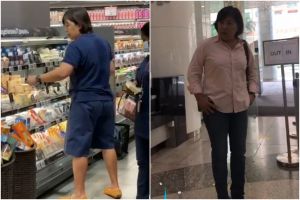 Phoon was also caught maskless at other public places in Singapore, including a FairPrice NTUC supermarket at VivoCity on 3 February 2021[9] and the entrance to Clarke Quay Central on 2 December 2020.[5]

During the latter incident at Clarke Quay Central, Phoon was refused entry by mall staff. In retaliation, she asked the mall staff the following:

Phoon can also be heard accusing the mall staff of “damaging the public image of Singapore.”

Phoon was first summoned to the State Courts on 24 May 2021 for her breach of regulations at Newton Hawker Centre.[11] She was notably maskless when she walked towards the State Courts building, only putting on a mask when she neared the entrance.

Phoon was not represented by a lawyer for this hearing, showing up for the court proceedings alone at 1:15pm. She attempted to remove her mask before addressing the court, but she was stopped by District Judge A. Sangeetha, who ordered her to leave it on.

The prosecution called for an adjournment of Phoon’s case as investigations into her other offences were still ongoing at the time. While Phoon initially questioned the adjournment, she eventually “obliged in good faith.” 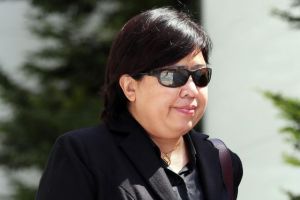 Phoon did not wear a mask as she walked to the State Courts on 24 May 2021. Photo from The Straits Times.

When she left the court at around 3pm, Phoon was observed to have removed her mask while clutching a water bottle that she did not drink from.

Phoon was arrested on 25 May 2021.[7] She was handed five charges under the COVID-19 (Temporary Measures) Act and one charge under the Infectious Diseases Act.

According to SPF and the State Courts, Phoon’s “conduct poses a real risk to public health given the current Covid-19 situation.”

Phoon was subsequently remanded at the Institute of Mental Health (IMH) for two weeks to be psychiatrically evaluated. Her case was then adjourned to 8 June 2021.

During the court hearing, Phoon attempted to get her charges dropped and lower her bail from $10,000 to $3,000 by citing her former position as a naval officer:

“I have a very strong professional standing, not only in Singapore, but globally... I served in the navy for 12 years and was the first female commanding officer.”

Phoon also claimed that the investigating officers had committed “procedural errors” in her arrest and had apparently apprehended her without a warrant. Specific to her SHN case, she claimed that she had just returned from a vacation and was unaware of Singapore’s mask-wearing laws.

When Phoon asked District Judge Janet Wong to clarify the COVID-19 regulations, she was informed that these were laws that everyone had to adhere to, which included the wearing of masks in public spaces.

Phoon’s case was then adjourned to 15 June 2021 to determine the additional charges that would be handed to her.

Phoon was next summoned to court on 15 June 2021.[13] During this court hearing, the prosecution mentioned its intention to mete out additional charges to her, including some related to the Immigrations and Checkpoints Authority (ICA). The details of these charges were not revealed at the time.

Phoon attempted to get these new charges dropped by emphasising her past naval career again. Stating that she had been an “eyewitness or plaintiff” in a number of unclarified cases linked to the Singapore Armed Forces (SAF), she claimed that it would thus make her present hearing unfair by default.

“I am not privy to discuss all these cases in court here without causing embarrassment or being prejudicial to the SAF and to the Government of Singapore... (I) am applying for all these charges to be dropped. Due to all these cases in the past, I should be granted immunity as a citizen,” Phoon said.[12]

District Judge Janet Wang responded by stating that Phoon’s experiences with the SAF were irrelevant to her present case.

Phoon’s third court hearing took place on 6 July 2021, where she was handed 14 new charges. These encompass ten charges of refusing to wear a mask in public and four charges for breaching her SHN in 2020.[8]

Deputy Public Prosecutor (DPP) Jane Lim successfully requested for Phoon’s bail to be increased from $8,000 to $12,000.[14] According to DPP Lim, the request was made because Phoon had not replied to calls and an email by ICA to assist in investigations. Phoon also rejected an ICA officer’s attempt to speak to her right before this court hearing.

DPP Lim also highlighted that Phoon had breached her bail condition to abide by COVID-19 regulations. This occurred on 25 June 2021, when she was caught not wearing a mask in Mandarin Orchard at around 3pm.[15]

Phoon responded to the new allegations by asserting that most of the new charges were “not presented to [her] previously.”

On the subject of rejecting the ICA officers’ attempt to contact her, Phoon said: "I challenge that, because I get a lot of prank calls on my mobile phone, so sometimes I just miss my calls. As to the email they sent me, I have not given my email account to any of the ICA officers, and it is not uncommon that I miss one or two emails if it's directed to (spam)."[14]

She also described the ICA officer outside the courtroom as “very aggressive” and was in “a highly emotional state”. She thus believed that her decision to not engage him was justified.[14]

On the subject of not wearing her mask, Phoon claimed to have a combination of eczema and breathing difficulties. She also mentioned that she had a “long medical history” that was linked to her personal life and her naval officer career.[14]

“If I'm wearing a mask and feeling breathless, I think it's the most natural human response to pull it down instead of collapsing ... (in order) to fulfil bail conditions. As a responsible Singaporean, I have complied with bail conditions as much as I wanted to,” she said.[14]

DPP Lim responded to Phoon’s defence by stating that “she should refrain from listing irrelevant reasons at this forum.” Specific to Phoon’s reasons for flouting her bail conditions, DPP Lim emphasised that they are determined by the court and should not be altered according to an individual’s “whim and fancy.”[14]

Phoon’s first pre-trial conference took place on 23 July 2021.[15] During the hearing, she was ordered to return to court on 13 August 2021 to attend a chamber hearing that will decide how her case will proceed moving forward.

One day later on 24 July 2021, a district judge revoked Phoon’s bail of $12,000. This was because Phoon had flouted her bail condition of adhering to COVID-19 laws by going maskless at Mandarin Orchard on 25 June 2021. She was then remanded.

Phoon was then slated for a second pre-trial conference on 26 July 2021. 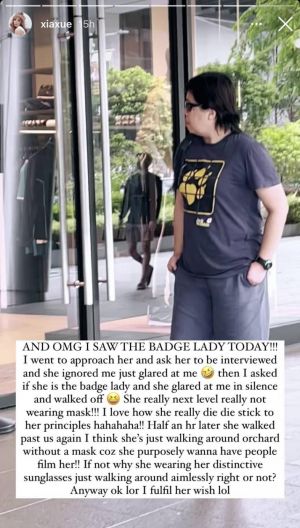 Phoon completed her term in prison after gaining a 16-week sentence on 6 September 2021.[16] Walking along Orchard Road without wearing a mask, she was spotted by Singaporean blogger Xiaxue, who featured her on an Instagram story.[17]

Xiaxue was interviewing passers-by in the area, and approached Phoon to ask for an interview likewise.[17] However, Phoon supposedly rejected her and walked away.[17]

This incident is said to be investigated by the Singapore Tourism Board. If found guilty, Phoon would be jailed up to a year and fined up to $20,000, as she would be a repeat offender.[16]

Following her maskless activity on Orchard Road, Phoon Chiu Yoke was handed three new charges according to an article published by CNA on 7th September 2022.[18]

Two of the three charges cover her breach of mask-wearing regulations and one was "under the Infectious Diseases Act for not complying with an officer during investigations." Both mask-related offences took place on the same day, 30 minutes apart.[18]

Phoon was self-represented at the trial and made known her intentions to "plea with mitigation factors".[18] She is expected to return to court sometime in October.