Peter Seah Lim Huat (born 1947) is a Singaporean businessman and senior banker. Notably, he is also the current Chairman of Singapore Airlines and the non-executive Chairman of DBS Bank.[1] A decorated businessman holding numerous board positions, Peter Seah was conferred the Distinguished Service Order by the President of Singapore in 2012 for his contributions to Singapore’s economy.[2]

Peter Seah is the third-born of five brothers. His youngest brother Victor, who was a practising doctor in Singapore, passed away in late 2019.[3] Peter Seah’s nephew Jonathan, is also a former doctor and the founder of the LifeHealth Group, a Hong Kong-based healthcare company.[4]

Peter Seah is married to his wife, Mylene, with whom he has two daughters.[5]

Peter Seah is an alumnus of Saint Joseph’s Institution (SJI).[6] From 1964 to 1968, he studied at the National University of Singapore, enrolling at the Department of Economics for his degree in Business Studies. When the NUS School of Business was formed in 1965, Peter Seah completed the rest of his studies at the school and eventually graduated with a Bachelor of Business Administration.[7] Peter Seah has held numerous senior ranking positions in Singapore’s public and private sectors. He became the chairman of DBS Bank in May 2010[1] and took over as the chairman of Singapore Airlines in 2017.[8]

Upon his graduation from NUS in 1968, Peter Seah worked as a sales executive for a pharmaceutical agency to fulfil his scholarship commitments. After completing his bond, he was offered a position at Citibank, where he eventually became the Country Head in Brunei.[7]

After spending nine years in Citibank, Peter Seah joined Overseas Union Bank (OUB) in 1977.[9] He held various senior positions at OUB until 1991 when he became its Chief Executive Officer and Vice-chairman.[8] Peter Seah retired from OUB when United Overseas Bank (UOB) bought over the company in a merger in 2001.[9][10] Speaking at the Fullerton-SJI Leadership Lecture Series in 2013, Peter Seah shared more about his time at OUB, saying:

“When I joined OUB, it was a very family-type organisation. I had come from Citibank, which was probably many years ahead in terms of technology, management style and knowledge. And I said overnight, “Why don’t we do things this way?”. Everybody turned around and said, 'We have been doing it this way for all these years and we have done well, so why are you asking us to change?'

So it dawned upon me that if you want to change mindsets, you want to change culture, you have to be a role model. And it takes time. It took me more than ten years to move the organisation to the type of culture and style that I wanted to accomplish.”[11]

In December 2001, Peter Seah was appointed to CapitaLand's Board of Directors in an independent and non-executive role. In January 2009, he assumed the role of Deputy Chairman and took on additional responsibilities in the company's various committees.[12] In April 2015, it was announced that he would be retiring from his roles in the company and would not seek re-election.[13] In a statement released by CapitaLand upon his retirement, Peter Seah was said to have been instrumental in his role as Deputy Chairman, leading the company towards being one of Asia’s largest real estate companies.[12]

In December 2001, Peter Seah was appointed as the President and Chief Executive Officer (CEO) of Singapore Technologies Engineering (ST Engineering), a state-owned company involved in the military contracting and engineering business.[14] In 2002, he was appointed as a Chairman on the Board of Directors. In December 2004, Peter Seah stepped down as the company's CEO and president. In April 2013, he resigned from his role as Chairman of the board at ST Engineering.[15] During his Chairman tenure, ST Engineering grew its revenues from $2.62 billion in 2002 to $6.38 billion in 2012. The company also raised its net profit (after tax) from $331 million to $576 million in the same period.[16] 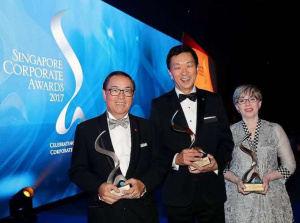 In November 2009, Peter Seah joined DBS Bank’s Board of Directors and assumed the role of a non-executive Chairman in May 2010.[1] He is also the Chairman of several committees within the company, including being the chairman of DBS Bank in Hong Kong. It was reported that Peter Seah earned $1.84 million for his work with DBS in 2013.[17] Under his stewardship, DBS won the 'Best Managed Board Award' at the Singapore Corporate Awards in July 2017.[18] In December 2017, Peter Seah was conferred the Distinguished Fellowship from the Institute of Directors (IOD), India for his contribution towards business and society. He was the first and only individual from the ASEAN region to be awarded the fellowship.[19]

In September 2015, Peter Seah joined Singapore Airlines’ (SIA) board of directors as its Deputy Chairman before succeeding Stephen Lee as the Chairman of the company in January 2017.[8] In an interview with Travel Daily Media in March 2020, Peter Seah shared more about SIA’s cost-saving strategies amid the COVID-19 crisis:

“Since the onset of the COVID-19 outbreak, passenger demand has fallen precipitously amid an unprecedented closure of borders worldwide. We moved quickly to cut capacity and implement cost-cutting measures. At the same time, we are also working with various parties to enable our staff on no-pay leave to have other income opportunities.”[20]

The following is a list of Peter Seah’s board appointments over the years.