Peggie Neo (born 6 January 1986) is a Singaporean YouTube personality and competitive eater. According to her social media platforms, she describes herself as a ‘mukbang eater’ - a South Korean term for a host that broadcasts themselves eating copious amounts of food while interacting with their audience. Peggie's younger brother, Zermatt Neo is also a YouTuber and an award-winning competitive eater. As of October 2020, Peggie has over a million subscribers on her YouTube channel and over 450,000 followers on Facebook. Her fanbase is called the 'Neo Nation'. 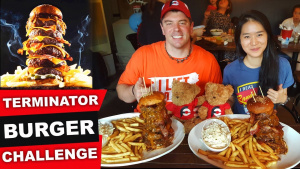 Randy Santel and Peggie Neo at Roadhouse Diner, Singapore in 2017. Photo from YouTube.

Due to her channel’s exponential growth in 2017, Peggie Neo was named the top rising content creator in Singapore by YouTube Rewind, a compilation of the platform’s most popular channels by category.[1][2] That same year, she made a food challenge video with the American professional eater, Randy Santel when he travelled to Singapore.[3][4] Peggie has also been given international coverage by media sites such as Men's Health in 2019 and Insider in 2020.[5][6]

Peggie Neo was born on 6 January 1986.[7] She has two siblings, Pierre Neo and Zermatt Neo - the latter of whom is also a YouTube personality and competitive eater.[8][9] According to her Facebook profile, Peggie is married to a citizen of the United States of America as of July 2020.[10] She divides her time between Singapore and Los Angeles, California.[11][12]

Peggie Neo has stated that her favourite food is grilled salmon and salmon sashimi, with her favourite beverage being Coffee Bean’s cafe latte. She reportedly eats one to two kilograms of fruit and vegetables for breakfast daily to maintain her stomach capacity for her mukbang videos.[7] In a YouTube video that was published in 2017, Peggie addressed some common misconceptions about her diet. She said:

"I don't eat like this every day. The only time I eat huge amounts of junk food is in my videos. When I'm eating on my own and there are no cameras filming, I don't eat so much... my diet consists of mostly fruits, lots of vegetables, salmon, greek yoghurt and I also drink lots of water."[13]

Peggie Neo created her YouTube channel in September 2015.[14] Her first video was uploaded around the same period.[15] At the time, she was a part-time YouTuber who was juggling a full-time job in the retail industry.[7] In 2017, Peggie created a separate channel called 'Peggie Neo Art' where she uploaded time-lapse videos of her drawings.[16][17] As of October 2020, Peggie does mukbang shows once to twice a week on her main channel which has amassed over 185 million total video views.[14] Her videos typically receive an average of over 70,000 views.[18][19][20] 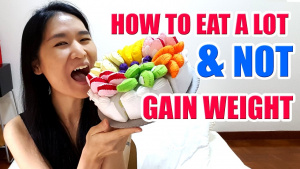 Peggie Neo pictured in a 2017 Q&A video. Photo from YouTube.

In a 2016 'Question and Answer" video on YouTube, Peggie said that she began doing food challenges after watching videos of the American professional eater, Randy Santel.[7] After training to increase her stomach capacity, she attempted Roadhouse Diner’s Terminator Burger challenge in 2015. Although she finished the food given, she failed to complete the challenge in the allotted time. Peggie elaborated more on her decision to start a YouTube channel, saying:

“I could have just forgotten the whole thing and just given up but I’ve already trained so hard to increase my stomach capacity. I want to put it to good use. So I thought, okay I’m going to start a YouTube channel and do eating shows just like the Koreans.” [7] 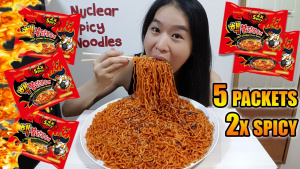 The thumbnail for Peggie Neo's most-watched video. Photo from YouTube.

With 17 million views as of October 2020, Peggie Neo’s most-watched YouTube video is the 'Nuclear Fire Noodles Challenge' in which she ate 5 packets of Samyang "2x Hot Chicken Flavor" ramen in one sitting.[21] The following is a list of Peggie's mukbang videos which have received a million views or more at the time of writing (October 2020).

Peggie Neo has participated in the following food challenges over the years.

In April 2017, Peggie took on the Wonder Cafe Challenge in Berkshire, England with the competitive eater, Hungry Ronin. They were required to finish a massive breakfast platter in 45 minutes, which Peggie completed in 38 minutes and 4 seconds.[29] The feat caught the attention of the local alternative news site Mothership, which featured her in an article.[34]

In October 2017, Peggie attempted the Roadhouse Terminator Burger challenge again after failing at the challenge in 2015.[3][7] She finished the 1.5-kilogram platter of burger and fries in under 19 minutes.