Being born prematurely, Pat Law could not speak for the first four years of her life. Due to her early drawing abilities, her parents sent her for fine arts classes when she was four. She had continued to draw even after overcoming her inability to talk. Eventually, she pursued her studies in marketing where she could turn her creativity into profit.[1]

Growing up, Pat also helped her parents run their duck rice hawker stall at Changi Airport’s staff canteen. At the age of 14, she worked as a toilet cleaner to earn her allowance and at 15 years old, she freelanced as a graphic designer while studying.[2]

Pat had her first love at 15, and also realised she liked girls.[3] However, she would only come out as gay two years later at 17, when she wrote a coming out speech to her secondary school volleyball teammates. She also identifies as non-binary and uses she/her pronouns.[3][4]

In 2009, she joined the marketing industry and worked in companies such as AKQA, Publicis, Leo Burnett/Arc Worldwide, TBWA and Ogilvy.[8]

She resigned from Ogilvy two weeks after her father was diagnosed with a brain tumour.[4] Her father eventually recovered after receiving surgery.[9]

Pat has also candidly spoken about the diversity in her family, with remarks on how her mom’s side in particular is “made up of SPGs with families in almost every continent”. She also cites her humble background and resulting thriftiness as the reason she is more creative.[10]

Pat Law is the founder of GOODSTUPH, a local social media marketing agency. She had originally started the agency due to the urgent need to pay for her father’s hospital bills. GOODSTUPH has done campaigns in Singapore and elsewhere in the region. Their former clients include The Straits Times, Sephora Asia and United Overseas Bank (UOB) with Nike being their first ever client.[1]

THE DAMN GOOD SHOP is an online retailer and sister company to GOODSTUPH. It sells mainly hyper-local and made-in-singapore products from local brands such as ‘BooksActually’ and ‘When I Was Four’ alongside vintage novelty items. The shop also sells products from GOODSTUPH such as tote bags and laptop decals with designs based on local icons.

ANOTHER GOOD THING is the social laboratory behind THE DAMN GOOD SHOP. It is an incubator that designs various innovative applications aiming to bring more convenience to people’s lives. The first product that had been created under ANOTHER GOOD THING was the SocialKit. It was created as a social experiment to allow Facebook users to better comprehend their social influence online.

Pat Law established GOODSTUPH in Thailand in 2020. It is the newest branch of the GOODSTUPH family in the Southeast Asia region.[12]

Pat was part of Yahoo’s 2017 International Women’s Day coverage, where Yahoo Lifestyle Singapore celebrated outstanding women in different industries. In this interview on 8 March 2017, Pat talks about how she, in order to help with her father’s medical expenses, resigned from her job at Ogilvy Public Relations and set up GOODSTUPH.[9]

In this interview, Pat describes her personal role-model, Linda Locke,[9][13] as someone she is fortunate to work for. Pat also says she hopes to be able to inspire women through the work that she does.[9]

In 2016, Pat talks about how she transformed a 50-year-old condo unit into a cosy “industrial vintage” home in a video with TheSmartLocal. She had just gotten back from Japan, and points to their “woody influences” as inspiration. Pat also talks briefly about her introversion.[14]

“If you’re asking me, between partying the whole night and getting drunk with friends, or hanging out at home? I’m the latter right now.” [14]

In 2022, Pat was interviewed by TheSmartLocal Media Group as part of their 20 Questions with Media Industry Leaders series. Describing herself as “curious, rigid and loyal”, Pat talks about steering her company through the COVID-19 pandemic and the award-winning Money Heist campaign led by partners in GOODSTUPH Thailand.[13] 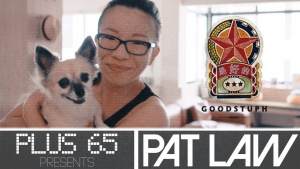 Pat Law was featured in a TSL YouTube video where she brought viewers on a tour around her home.

“We panicked a little back in 2020 when the pandemic hit, but you know, when life gives you lemons, make lemonade. Better yet, own the lemonade plantation, distributorship, and sell bloody Lemonade NFTs.” [13]

Pat has previously spoken out about the dwindling hawker culture in Singapore and had voiced her displeasure regarding the mistreatment of hawkers in Singapore. In October 2018, she posted several Instagram Stories expressing her thoughts and pointed out several key unresolved issues hawkers are facing now such as high rent and the lack of health insurance.[15]

In another article following Prime Minister Lee Hsien Loong’s announcement of the landmark decision to repeal section 377A of the Penal Code, Mothership spoke to Pat on her views on the matter. Being openly gay, Pat welcomed repeal as a “start”, and implored activists and allies to “keep the faith”.[3]

“I know it's not a big win, but we need to stay positive. So I decided a win is still a win, let's celebrate it first… If you don't keep your faith, you will shut that door down, and when you shut that door, it does not open up for the next generation of LGBT folks to come.” [3]

Pat also hopes that the repeal will set a precedent in terms of getting people to talk about and exchange perspectives on the issue of LGBT rights in Singapore.[3]

“I hope we will be more empathetic as a society and more open-minded over time because culture is not produced in a day.” [3]