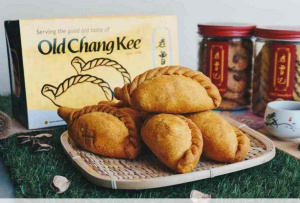 Old Chang Kee is a Singaporean food business specialising in the production and retail of assorted fried snacks. From 2013 to 2016, Old Chang Kee won the 'Top Brand' award consecutively at the Influential Brands Awards. In 2017, the brand made it to the awards' Hall of Fame.[1] As of June 2020, Han Keen Juan is the Executive Chairman of the company while William Lim Tao-E is the Chief Executive Officer.[2] According to the brand's website, Old Chang Kee has 78 outlets across Singapore and operates in four countries.[3]

Old Chang Kee started as a nameless curry puff stall in the 1950s. Its owner was Chang Chuan Boon, an immigrant from Hainan. Chuan Boon retired and returned to China in 1986.[4] 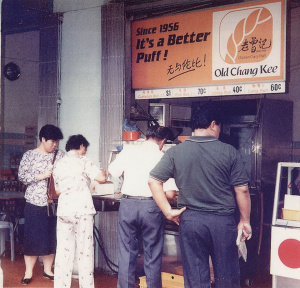 In 1986, a 37-year-old Han Keen Juan bought the curry puff stall from its founder, Chang Chuan Boon at a sum of S$70,000.[5][6] The two had met through the Hainanese clan association. Han Keen Juan was responsible for spearheading the brand's local expansion in the 1990s.[7] In 1992, Han was the Rotary Club's 'Entrepreneur of the Year'.[8] That same year, the Association of Small and Medium Enterprises awarded him the title of 'Small Scale Entrepreneur' for his achievements with Old Chang Kee.[9]

William Lim Tao-E is Han Keen Juan's nephew.[10] He joined Old Chang Kee in 1995 and became the brand's Chief Executive Officer in 2004.[11] William went to Curtin University in Western Australia from which he graduated with a Bachelor of Commerce degree in Marketing.[12]

Old Chang Kee traces its origins to 1956 when Chang Chuan Boon opened a food stall at Koek Road (currently located between Orchard Point and Orchard Plaza) selling Hainanese-style curry puffs.[13][14] These fried pastries were filled with chicken, egg and potatoes that were infused with a variety of herbs and spices. Chuan Boon then moved his stall to Albert Street. In 1973, he opened another stall outside Rex Cinema along Mackenzie Road.[15] The curry puffs became widely known as the 'Rex Curry Puff'. In 1981, the Albert Street stall was relocated by the Environment Ministry in a move to re-home street-side hawkers into food centres.[16]

As of June 2020, Old Chang Kee outlets are presently located at petrol stations, shopping centres, MRT stations and bus interchanges. Over the years the brand has expanded its menu from just curry puffs to assorted fried snacks. It also offers delivery and catering services. 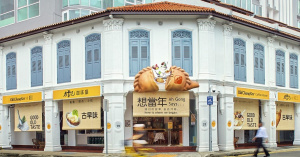 In 2018, Old Chang Kee opened its flagship 50-seater restaurant in Singapore. Old Chang Kee Coffee House @ Rex is located at the site of the first stall owned by Han Keen Juan. Aside from the snacks that are traditionally sold at Old Chang Kee kiosks, the restaurant offers special menu items like curry chicken served with 'Flower Bread' and baked beef stew rice with cheese.[23]

In 1993, Old Chang Kee first expanded overseas to Malaysia, Indonesia, China and Japan, with the catchphrase “A Taste of Singapore”.[24] In one and a half years, business in Malaysia and Indonesia respectively generated S$1,700,000 and S$1,000,000 in revenue.[25] As of June 2020, the brand operates in four countries outside of Singapore. The following table provides more details of Old Chang Kees presence in each of these markets. 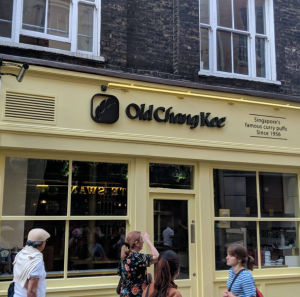 The storefront of Old Chang Kee's outlet at Covent Garden. Photo from Facebook.

When Han Keen Juan acquired Chang Chuan Boon's curry puff stall in 1986, he prompted named the stall to differentiate it from the other curry puff stalls in the vicinity.[33] He had also engaged an advertising agency to develop the branding of the business.

As of June 2020, Old Chang Kee Singapore has over 22,000 followers on its Facebook page and over 11,500 followers on Instagram. On its socials, the brand offers promotions and giveaways to its followers aside from other brand-related announcements.