Nelson Yap (born 1982) is the founder and chief executive officer of the homegrown menswear brand, Benjamin Barker.[1] Having started the business in 2009, Nelson Yap has been recognised as one of the pioneers for affordable men’s fashion in Singapore.[2] Besides managing Benjamin Barker, he is also the managing director of The Assembly Ground, a café that accompanies The Assembly Store which he opened in 2014.[3] In 2016, Nelson Yap represented the brand when Benjamin Barker won top honours at the Emerging Enterprise Awards.[4] 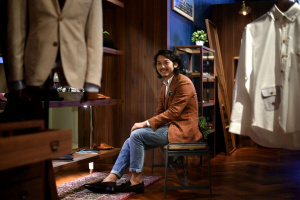 Nelson Yap pictured in one of his Benjamin Barker stores. Photo from source.

Nelson Yap was an aspiring film-maker before he became a professional entrepreneur. He shared the following about his journey at a [email protected] event:

"Sometimes, our dreams may get interrupted. Life doesn't always turn out as we expect... When I went there (Australia), I found my dream and I was pretty good at it. My teacher actually offered me a job to teach at the university after I graduated... But all this changed with one phone call. I found out that my dad was diagnosed with the final stage of cancer."[5]

Nelson Yap is the middle child of three siblings.[1] After completing his tertiary education in Australia, he returned to Singapore to run his family's discount suit business upon learning about his father's deteriorating health.[6] Nelson Yap is married to Dawn Hu, whom he met at a Christian fellowship when they were both university students in Melbourne, Australia. They have three daughters together.[1][7]

Nelson Yap completed his primary and secondary school education at Anglo Chinese School (ACS).[8] From 2002 to 2005, he studied cinematography and film production at the University of Melbourne and graduated with a Bachelor of Creative Arts.[9][10] According to his LinkedIn profile, Nelson Yap also completed a Master’s program in business information technology (IT) at RMIT University in Melbourne and an executive program in entrepreneurial business from the London Business School.[8] 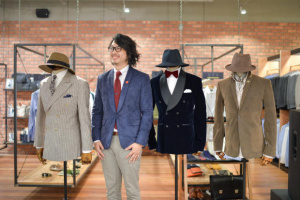 Nelson Yap pictured with some of the apparel retailing at his stores. Photo from source.

Nelson Yap decided to start his own fashion and retail brand after two years of running his family’s discount suit business. In a 2016 interview with fashion and lifestyle website Buro 24/7, he said:

“I realised I just couldn't make that (the family business) work. It was very hard to change anything within the company and so, I talked to my mum about starting my own label, and doing things the way I wanted to.”[2]

Nelson Yap established Benjamin Barker in 2009 with the vision to provide quality and stylish menswear that is also affordable. That same year, he opened Benjamin Barker’s first brick and mortar store in a 62-square-metre retail space in Marina Square.[9][11] Speaking about the early days of Benjamin Barker, Nelson Yap said:

"When we started off it was very tough because when we wanted to get into malls, there was a lot of hesitation... We pumped back everything into our next store. But we didn’t grow because we wanted to have more stores, we grew because we identified that there’s a bigger market."[12]

In September 2018, Benjamin Barker opened its flagship store and café at Cathay Cineleisure.[13] Launched concurrently with the flagship store was ‘Red Label’, the company’s first womenswear line of suits and bespoke clothing.[14] In May 2020, DesignSingapore Council reported that Benjamin Barker made close to $15 million in the 2019 financial year; a twenty percent increase from 2018.[15] As of December 2020, Benjamin Barker has 12 outlets across Singapore.[16]

In May 2014, Nelson Yap and then-general manager Damien Tan opened multi-label retail space The Assembly Store and its accompanying café The Assembly Ground at The Cathay.[17][18] Speaking to The Business Times in a 2016 interview about his decision to open the cafe, Nelson said:

"It's an extension of who we are. The cafe was a very natural choice for me, because my passion is in coffee - I worked as a barista in Melbourne, and I fell in love with the coffee culture there. Damien is the food guy; he spent time in Naples making pizza."[9]