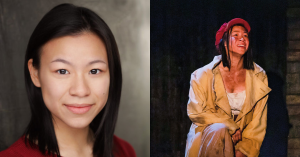 Nathania Ong (born 1998) is a Singaporean musical actress currently based in the United Kingdom. She is best known for her role as Eponine in Les Miserables, having starred in the musical’s UK & Ireland tour and later reprising it in the actual West End production.[1]

Nathania says that as a child, she was mainly inspired by her father, who loved singing, and Filipino musical actress and singer Lea Salonga.[1] Her first performance was in 2004, when she was five years old. She performed the popular National Day song Home, by Kit Chan, with her sister on Total Defence Day in front of late president S R Nathan.[1] This was also when she realised her love for performing.

She won a talent competition in Primary 4 while she was a student at Methodist Girls’ School, thereafter pursuing music with her parents’ encouragement and support.[1]

Nathania attended Methodist Girls’ School and the affiliated Anglo-Chinese Junior College in her youth.[1][2] It was in junior college that she first started acting in her school’s drama elective.[2]

Following her junior college education, she applied to five different performing arts schools in the United Kingdom. However, after numerous rejections, she decided to major in theatre acting in the local Lasalle College of the Arts instead.[2] A year into her studies in Lasalle, a friend encouraged her to apply to Mountview Academy Of Theatre Arts in London, where she was accepted into the highly-competitive specialist musical theatre programme in 2018.[1][2] She graduated from Mountview Academy in 2021.[3] 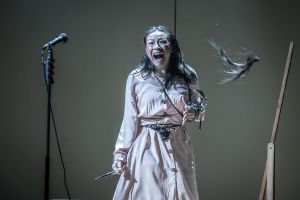 Nathania as Lady Cunegonde in Candide. Photo from Instagram.

Nathania has played various roles in stage plays and musicals over the years, many of them Mountview Academy productions.[4] She made her debut in London’s iconic West End in 2021, playing the role of Jenna Roland in the musical Be More Chill.[1][4] In 2022, she became the first Singaporean to play Eponine in the long-running musical Les Miserables, based on the 1862 novel of the same name by Victor Hugo.[1][2] 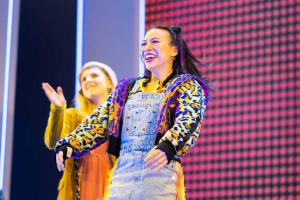 Nathania as Jenna Rolan in Be More Chill. Photo from Vogue Singapore. 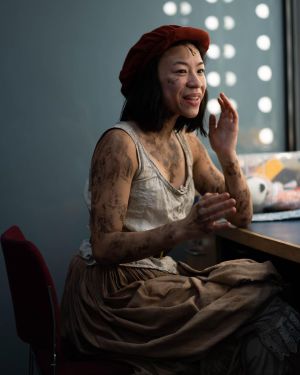 Nathania backstage at the Les Miserables UK & Ireland Tour, in which she plays Eponine. Photo from Instagram.

In a feature with Vogue Singapore published on 16 November 2022, Nathania talks about her journey to West End, as well as what it means for her “to be an Asian performer in the international theatre scene”.[5]

In particular, Nathania talks about how the numerous rejections from different performing arts schools in the UK negatively impacted her willpower.

“I tried to hone my acting, but I had somewhat given up on that dream. The experience of getting rejected from all those schools in the UK was a little bit too much. It was an expensive mistake for me.”[5]

Mustering up the courage to apply to other programmes in the UK had taken a year, and even then, proved as much a financial challenge as a mental one. Nathania tells Vogue Singapore that she worked three part-time jobs “concurrently” to save up enough money to pay for her trip to London so she could take part in the final stages of the audition for Mountview Academy’s specialist musical theatre programme.[5] She eventually got a spot in said programme.

“I don’t think I would have been as satisfied with getting to this point if I didn’t struggle like that. It’s been a long journey to get here, and I’m not done yet. I’m going to do more.”[5]

Nathania talks a little bit about the arts scene in Singapore, particularly how she “got to be around so many like-minded people who worked so hard in order to be able to pursue the arts for a living”.[5] She then rounds up the interview by talking about how it is like to be an Asian performer on the international stage, as well as her ultimate goal as one.

“I love being an Asian performer. It’s not always the easiest thing to be in this industry, but I can’t dissociate myself from my race. All I want is to do good work and be seen for what I’m putting out rather than the colour of my skin... For me, it’s really about focusing on my craft and having fun while doing it. And it’s about exploring and bringing as many characters to life as I possibly can, to the best of my abilities. That’s my ultimate goal.”[5]