Natalie Siow Yu Zhen (born 1996) was one of the attackers involved in the 2019 Orchard Towers murder. The violent group attack resulted in the death of 31-year-old Satheesh Noel Gobidass. On 9 October 2020, Natalie Siow was sentenced to five months’ jail after pleading guilty to two charges.[1] She was the only female in the group who was charged and given a criminal sentence.[2] According to a 2020 report by MustShare News, Siow gained over 10,000 followers on social media due to her criminal trial.[3] As of October 2020, she has over 12,000 followers on Instagram.

At around 1 am on 2 July 2019, Natalie Siow, a part-time pub waitress at the time, met her two friends, Joel Tan and Ang Da Yuan, for drinks at Club Mao in Chinatown.[4] After a few hours of club-hopping, the group consisting of at least ten people went to the Naughty Girl Club located on the second level of Orchard Towers.[4][5] In the club, Siow had reportedly agitated one of her friends, Tan Sen Yang, when she teased him for losing two rounds of a drinking game. In a fit of anger, Tan Sen Yang withdrew a kerambit knife from his pocket and slammed it on the table.[1] This knife was later identified as the murder weapon. 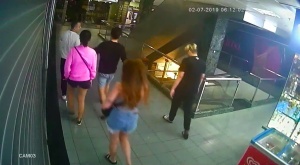 Pictured: Natalie Siow (in denim shorts) moments before the scuffle on the second floor of Orchard Towers. Photo from source.

When the group left Naughty Girl Club at about 6.20 am, they ran into another group of about five people at the entrance of the club. According to Deputy Public Prosecutor (DPP) Ang Feng Qian:

"There was therefore some congestion at the doorway. As Joel (one of the accused) stepped out with the rest of his group, he heard an exchange of terse and vulgar words between (Tan Sen Yang) and persons from the other group."[6]

A scuffle then broke out between both groups during which Tan Sen Yang wielded his kerambit knife, injuring a security officer and a passer-by.[5] Natalie Siow reportedly joined the scuffle and flipped a table near the entrance of the club.[1] Both groups dispersed after an unknown person shouted that the police were arriving. 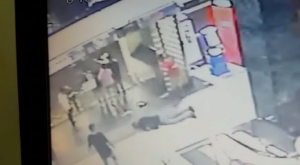 CCTV footage of the victim, Satheesh Gobidass after he collapsed. Photo from source.

At the time of the initial scuffle outside Naughty Girl Club, Satheesh Noel Gobidass was allegedly a by-stander.[1] As Natalie Siow and her friends were exiting Orchard Towers, Satheesh Gobidass descended from an escalator and confronted one of Siow’s friends, Ang Da Yuan.[5] Gobidass and Ang then shoved each other, prompting the other members of the group to attack Gobidass. Tan Sen Yang reportedly slashed and stabbed Gobidass with his kerambit knife a few times during the fight.[1] As Siow’s group made their way out of the mall, Gobidass was seen walking in their direction. After taking a few steps towards the entrance, he collapsed face-first onto the floor.[7][8]

In a CCTV video that was released on YouTube, Natalie Siow could be seen participating in the affray; punching and kicking Gobidass along with her friends. She was seen attacking the victim twice but was held back the second time.[7] After Satheesh Gobidass collapsed, Natalie Siow reportedly walked past the victim to retrieve her slipper which she had left behind during the confrontation.[5]

Satheesh Noel Gobidass was brought to Tan Tock Seng Hospital where he was pronounced dead at about 7.25 am on 2 July 2019.[9] An autopsy revealed that Mr Gobidass’ cause of death was a stab wound to the neck.[1] 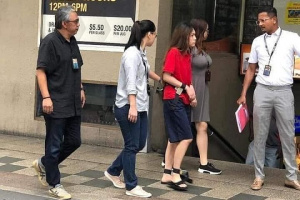 A handcuffed Natalie Siow (in red) pictured outside Orchard Towers in 2019. Photo from source.

Within 12 hours of the attack, Natalie Siow and seven of her friends were arrested in connection with the murder of Satheesh Noel Gobidass.[10][11] 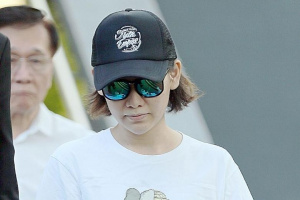 On 4 July 2019, Natalie Siow was charged with murder with common intention and faced the death penalty if found guilty.[12][13] Additionally, she was charged with consorting with a person in possession of a dangerous weapon and disorderly behaviour in a public place.[14] In a statement read by her lawyer, Amarick Singh Gill, Siow was quoted to have said the following about her involvement:

“When it comes to drinking I get agitated and aggressive sometimes, I know being drunk is not an excuse. At that point in time I saw my male friends having problems with people. I did not know the incident resulting in the Indian guy’s (Mr Gobidass) death, when I was at level one (of Orchard Towers) I saw (his) face (had) a lot of blood. (I am) sorry for this death and did not know he would die.”[5]

In October 2019, it was reported that Natalie Siow’s murder charge had been reduced to voluntarily causing hurt.[15][16][17] In November 2019, Siow disputed her charge of consorting with a person in possession of a dangerous weapon.[14]

In October 2020, it was reported that Natalie Siow had pleaded guilty to two charges:

For these two offences, Natalie Siow was sentenced to five months in jail.[1] Ang Da Yuan was sentenced in March 2020 to eight months’ jail and six strokes of the cane[4] while Tan Sen Yang, the owner of the murder weapon, is still pending a capital charge for murder as of October 2020. 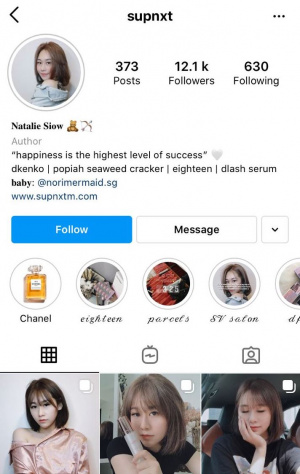 Natalie Siow's Instagram feed as of 19 October 2020. She shot to fame after her criminal case was publicised.

In 2019, The Daily Mail, a media site based in the United Kingdom, termed Natalie Siow an "influencer" due to the surge in her Instagram followers after her court case was publicised.[19] She became an online sensation on Singaporean forums due to her pleasant appearance.[22] There is even a community thread on Hardwarezone called the "[OFFICIAL] NATALIE SIOW YU ZHEN FAN CLUB".[23] In October 2020, one of Natalie Siow's new followers published a Facebook post defending her innocence. An excerpt of their post reads as such:

"People make mistakes, and if you follow the news, she was not charged for murder, with her charge greatly reduced along with several others. In the end, only the siao kia (crazy person) brought out the dangerous weapon... Why should the others be denied a good future for a small mistake during a rash session?"[24]

An article on the alternative news site, MustShare News attributed Natalie Siow’s increased popularity to a phenomenon called the Halo Effect of Attractiveness, where people are more likely to attribute positive traits to attractive individuals.[3] As of 2019, Natalie Siow is the founder of Supnxt Beauty Market, an e-commerce site that retails health and beauty products from various brands.[25]