On 30 April 2018, Private Dave Lee Han Xuan, a Guardsman from the 1st Battalion Singapore Guards was pronounced dead at Changi General Hospital. His death came 12 days after he was first admitted for heatstroke.[1] Dave Lee was 19 years old at the time. He was a full-time National Serviceman (NSF) in the Singapore Armed Forces (SAF) serving his two-year mandatory National Service. 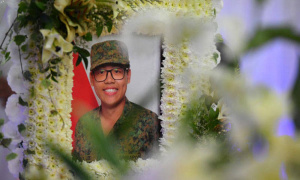 NSF Dave Lee passed away on 30 April 2018 from heat-stroke injuries. Photo from The Straits Times.

On 18 April 2018, Dave Lee displayed signs of heat injury after completing an 8-km fast march and was in dire need of medical attention.[2] The incident occurred at around 8.35 am in Bedok Camp. The on-site SAF medics attended to Dave Lee before he was brought to the Medical Centre in the camp, where the SAF medical team continued to attend to him. At 9.50 am, he was transferred to Changi General Hospital and warded in the Intensive Care Unit (ICU). On 30 April 2018, Dave Lee was pronounced dead at 5.32 pm due to the severe heat injuries he had sustained.

On 1 May 2018, Dave Lee’s aunt, Cecilia Yeo published a Facebook post which contained what seemed to be a witness statement from the late Dave Lee’s platoon mate (Facebook post). The statement detailed a number of lapses in administering immediate medical aid to Dave Lee following the signs of his heat injury. The statement also mentioned that the platoon had undergone unwarranted physical punishments by their senior commanders the night before the 8-km fast march. Cecilia Yeo expressed that Dave Lee’s family demands a "full explanation from SAF to the public" regarding this matter.[3]

On 2 May 2018, Dave Lee’s mother, Jasmine Yeo spoke to reporters at a press conference.[4] When asked about the supposed witness account published by her sister on Facebook, she stated that she wanted to first settle her son’s funeral before commenting on the matter further.

Following the incident, the Ministry of Defence (MINDEF) convened the Committee of Inquiry to look into investigations. On 6 August 2018, MINDEF released a report explaining the sequence of events on 17 and 18 April 2018.[5] The details discovered by the COI were as such:

On 17 April 2018, Dave Lee was in the group of soldiers tasked to complete a 2.4-km run at a common pace for the first 3 laps. According to SAF's Training Safety Regulations (TRS), soldiers should be grouped according to their running ability and run at their own pace. The soldiers were only given 1 minute to rest between each lap despite the stipulated 1 minute and 45 seconds. At roughly 9.40 pm, the entire Scout Platoon including Dave Lee were handed an unauthorised physical punishment by their commanders. The punishment lasted for 30 to 35 minutes. As such, the platoon had less than the mandatory 7 hours of uninterrupted rest required before an 8-km fast march.

On the day of the 8-km fast march, Dave Lee’s recorded temperature was regular at 36.6 degrees celsius. His buddy witnessed him drinking sufficient water and eating breakfast. After the first 6-km of the fast march, Dave Lee rested for 20 minutes which was mandatory for all troops. He had informed the commanders that he was experiencing calf muscle cramps after the rest period. The commanders told him to stretch his calf muscles and continue with the rest of the march, which he complied to.

Dave Lee was the last man to reach the endpoint of the 8-km fast march, where he had shown symptoms of being unwell. He was then swiftly attended to by SAF medics. However, the SAF medics attending to Dave Lee right after his completion of the 8-km fast march had made a wrong initial diagnosis, thinking that he was suffering from physical exhaustion. This resulted in inadequate on-site cooling measures being administered to Dave Lee. Furthermore, Dave Lee was only transferred to Changi General Hospital more than an hour after the initial onset of symptoms. 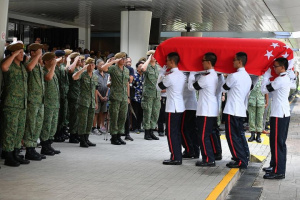 The military funeral of NSF Dave Lee. Photo from The Straits Times.

On 5 May 2018, a military funeral was conducted for the late Dave Lee.[6] He was also accorded a posthumous recognition, promoting him to the Corporal First Class rank and awarding him with the Guards and RECON military tabs.[7]

A large number of people turned up for Dave Lee's wake which was held at Jurong East. At around 1.25 pm, his cortège was loaded by fellow servicemen wearing black armbands.[8] As per the traditions of a military funeral, the state flag had been draped over Dave Lee's casket. A military band played in his honour and hundreds of military personnel also flanked the pathway at Mandai Crematorium.

His parents, secondary and junior college classmates, Basic Military Training platoon mate and the Commanding Officer of the 1st Battalion Singapore Guards all delivered eulogies at his funeral.[9] A state flag was also passed to his family, along with a gun salute and a minute of silence. As a final ceremonial farewell for all state funerals, the Last Post and Rouse bugle call was played.

The incident triggered a one-day safety pause on 30 April 2018. MINDEF commanded the safety pause to review training and safety management plans.[10] Following the findings by the COI, several recommendations were made to the SAF. The SAF implemented the following changes to ensure a reduced risk of heat injuries in NSFs:[11]

On 6 August 2018, after the preliminary findings by the Committee of Inquiry (COI) investigating the Dave Lee incident was revealed, his mother told reporters that significant punishment must be dealt to those who were responsible for the lapses in conduct which had ultimately led to her son’s death. She hoped that the punishment can become a deterrent towards military higher-ups conducting future unwarranted punishment sessions.[12]

On 31 October 2018, the Officer Commanding of Support Company, 1st Guards Battalion, Tan Baoshu was charged for performing a rash act and failing to take swift action in evacuating the late Dave Lee when he required greater medical attention.[13]

Tan Baoshu was also the supervising officer of the 8km fast march on 30 April 2018 which claimed NSF Dave Lee’s life. If convicted, he would be liable for imprisonment of up to five years, or a hefty fine, or both. The Singapore Police Force (SPF) has also referred 6 other individuals who were allegedly involved in causing Dave Lee’s death to MINDEF. Out of the 6, 2 of them were Regular servicemen and 4 were National Servicemen. If found guilty of potential breaches of military law, they will be punished accordingly. Punishments range from a fine to detention, reduction in rank and administrative penalties being imposed.[14]