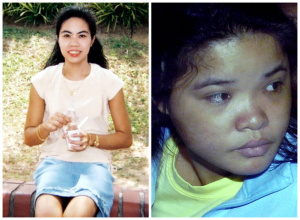 In September 2005, two bags containing dismembered human body parts were found at two locations in Singapore - Orchard Road and MacRitchie Reservoir. The body parts belonged to Jane Parangan La Puebla, a 26-year-old domestic helper from the Philippines. The discoveries prompted a murder investigation that led to the conviction of 29-year-old Guen Garlejo Aguilar.

The bagged remains found near Orchard MRT station. Photo from The Straits Times.

The 2005 murder case involved two Filipino women who were then working as domestic helpers in Singapore. Despite speculations that the two were involved in a supposed “love triangle”, they were believed to have been close friends.[1][2][3] According to a news report by TODAY, Guen Garlejo Aguilar described her victim as:

“... a 'highly reliable' friend one could 'really confide in and share all her deepest thoughts and concerns with'.”[4]

When La Puebla turned to Aguilar for financial help, the latter obliged; loaning her $1,000 from her savings and borrowing another $1,000 from a friend.[4] In court, it was argued that the pressure arising from this financial situation was the main motive for the crime.[5] The following are the profiles of the victim and the perpetrator.

Guen Garlejo Aguilar killed Jane Parangan La Puebla on 7 September 2005. The friends were cooking together at Aguilar’s employers' apartment when they started fighting over the $2,000 that La Puebla owed her. Aguilar then strangled La Puebla to death and hid her body in a suitcase for the next two days.[9] La Puebla’s employers filed a missing persons report on 8 September 2005.[5] The next day, Aguilar bought the following items from Mustafa Shopping Centre:

She then dismembered La Puebla’s body in her employer's apartment before disposing of the parts at Orchard Road and MacRitchie Reservoir. 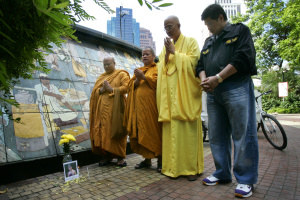 Monks at the site where Jane La Puebla's remains were found. Photo from The Straits Times.

On 9 September 2005, a street cleaner by the name of Maria Yee Marutham discovered a severed human head and limbs in an unattended sports bag near Orchard Road MRT station.[10] The head had been put into a red plastic bag while the arms and legs were stashed in two separate plastic bags.[11] A bite mark on one of the severed arms would later be found to match Guen Garlejo Aguilar’s dental records.[12] The sports bag was found in the early afternoon.[5] 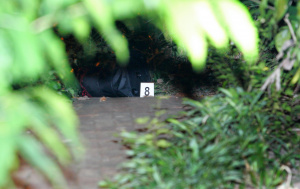 The bagged remains found at MacRitchie Reservoir. Photo from The Straits Times.

On 10 September 2005, a passer-by came across a ‘World Polo’ suitcase at MacRitchie reservoir containing a human torso.[10] According to a court document, the bag also contained:

Guen Garlejo Aguilar’s murder charge was reduced to a manslaughter charge at a preliminary inquiry in April 2006[9] on the grounds of diminished responsibility.[13][14] She was diagnosed with masked depression by the case's state-appointed psychiatrist, Dr Tommy Tan.[15] Aguilar’s trial started on 15 May 2006. During the trial, Dr Tommy Tan presented a testimony stating that Aguilar was unlikely to commit another offence and that the Mayor of Tagudin, Ilocos Sur (Aguilar's hometown) had pledged to give social and counselling support to Aguilar when she returns to the Philippines.[16] Aguilar was represented by a legal team from Harry Elias Partnership that was led by Shashi Nathan.[6]

On 29 May 2006, Guen Garlejo Aguilar was sentenced to 10 years' jail for manslaughter.[17][18] Justice VK Rajah, the presiding judge of the case, noted that Aguilar's moral judgement was likely to have been tampered by her prevailing mental illness, leading her to inhumanely dismember the deceased. He says:

"(her decision to plant to body parts in) two very public places... strikes one as incoherent and incomprehensible. It would be fair to infer that her prevailing illness was in all likelihood severely exacerbated after she killed the deceased."[16]

Since making the headline news in 2005, the murder has also been featured on MediaCorp's Crimewatch television series and more recently, on MustShare News' Facebook platform.

Posted on 25 February 2020, the three-minute Facebook video titled 'The Domestic Helper Murder' has received over 3.5 million views as of 18 September 2020.[19] The video was published as a part of MustShare News' ongoing series, Most Daring Crimes.

The murder case was featured in Episode 5 of Crimewatch which aired on 27 July 2006.[20] Dubbed the 'Orchard Rd Body Parts Murder', the episode provided several re-enactments of the crime and a timeline of the investigations that followed. Crimewatch is a docu-drama series that showcases the crimes solved by the Singapore Police Force. The show was televised on Channel 5.