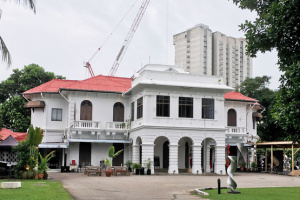 Mount Emily Villa under the care of Emily Hill Enterprise is an event space and home to the neighbourhood bar, Kult Kafé. Photo from Roots.sg.

The Mount Emily Villa, at times referred to as the Osborne House, is located at the top of the hill on 11 Upper Wilkie Road. The oldest structure on Mount Emily, the colonial-era villa was once home to a Singapore-based Japanese dentist before it became the Japanese Consulate Office during the Second World War. Subsequently, it became the building for the Mount Emily Boys’ Home before it was converted to the Mount Emily Girls’ Home. As of 2019, the villa is occupied by Emily Hill Enterprise, a non-profit arts organisation and a neighbourhood bar, Kult Kafé.

The Mount Emily Villa was briefly referred to in December 1891 through the birth announcement of Mr Heinrich Bock’s daughter.[1] In June 1896, it was reported in The Singapore Free Press and Mercantile Adviser that the 45-year-old Heinrich Bock passed away at the Osbourne House.[2]

The building’s story remained unrecorded until 1935 when it was bought by Mr Jukichi Ikeda, a Japanese dentist. Costing $22,000 at the time, the 86,439 square feet property was home to Mr Ikeda and his wife, his niece and her husband, and his grandchildren. The home was part of the pre-World War II Japanese enclave around Middle Road. By 1939, Mr Ikeda and his family had vacated the villa for the Japanese Consulate Office.[3]

On 27 April 1939, the Japanese Consulate Office moved from the Union Building at Collyer Quay to the Mount Emily Villa where it remained throughout World War 2.[4] Consul General Issaku Okamoto was the first inhabitant of the villa, followed by Mr Kaoru Toyoda and eventually Mr Ken Tsurumi.[5] When the war ended, the Japanese Consulate Office vacated the villa’s premises. The property then came under the ownership of the Ministry of Social Affairs’ Social Welfare Department. 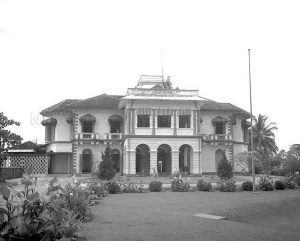 The front-facing facade of Mount Emily Villa in 1959 when it was a girls' home. Photo from National Archives Singapore.

Social welfare activity began in the Mount Emily Villa in the late 1940s. The Mount Emily Boys’ Home was initially run by a committee of volunteers before the Social Welfare Department assumed control in 1947.[6] The department was responsible for the administration and maintenance of the home.

The villa housed fatherless boys of all races, of which 30% of them were orphaned as a result of the war. The home used to experience inadequate sleeping and sanitary conditions as well as a reduced diet due to the lack of monetary funds. In response, the state pumped in a sum of S$42,504 to pay for the maintenance of the home in 1949, thereby improving its overall living conditions.[7] 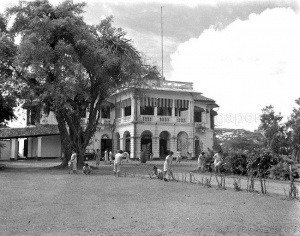 A 1952 photograph of Mount Emily Villa showing the girls tending to its grounds. Photo from National Archives Singapore.

The Mount Emily Boys’ Home was converted to the Mount Emily Girls’ Home in 1952.[8] In 1957, it was reported that the Social Welfare Department spent S$95,000 on the expansion of the girls’ home.[9] The villa housed girls of all races and nationalities, ranging from 14 to 20 years old.[10] These girls were picked up by the anti-vice squads during brothel raids or taken there by parents who could no longer control their daughters.

With social rehabilitation as its main objective, the home aimed to instil moral values and feelings of self-pride in its wards. Under the guidance of experienced officers, the girls were taught useful trade skills, such as sewing and laundry, that would allow them to fend for themselves after leaving the home. An average period of stay ranged between two to three years and the girls were generally successful in integrating back into society.[11]

In 1977, the Social Welfare Department introduced its first “experimental project” in the Mount Emily Girls’ Home. The home had set up a mini electronics factory for assembly work on the ground floor of the villa. The factory was a joint operation between the home and a Japanese electronics film. It aimed to expand on the home’s rehabilitation programme. Half the girls were employed in the mini-factory, working for 8 hours a day on a  5-and-a-half day week. They were paid on a ‘piece-rate’ basis and monthly wages amounted to $150 each. It was reported that the girls were generally enthusiastic about the initiative as they were paid for their work. Moreover, they could accumulate working experience that would give them a future advantage.[12]

As part of the home’s other rehabilitation programme, the girls did laundry work for organisations and ran a food catering service where members of the public could order a variety of food at reasonable prices.[13] In subsequent years, Taekwon-Do was also offered as part of the programme, a move that was well-received by some of the girls.[14]

In 1981, it was announced that the Mount Emily Girls’ Home would stop taking in girls into the home. The decision was made after the home experienced a steep decline in its admission rates over the last three years. Where it used to admit 142 girls in 1974, the figure had fallen to 35 girls in 1979, and 23 girls in 1980. By the first six months of 1981, only six girls were admitted.[15]

However, the decrease in admission rates did not translate to a decline in juvenile prostitution. According to a Ministry of Social Affairs spokesman, the falling numbers indicated that the girls’ modus operandi had gotten more complex, making it difficult for the Anti-Vice Enforcement Unit to flush the girls out. The Mount Emily Girls’ Home ceased operations on 11 July 1981.[16] 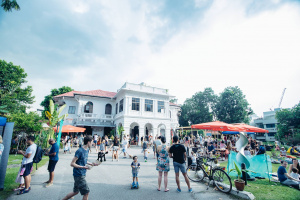 A 2018 image of Mount Emily Hill Villa's premises during a public event. Photo from Kult Kafé.

The villa was briefly occupied by the Nanyang Academy of Fine Arts before it was returned to the Singapore Land Authority. In 2007, the villa was leased to Emily Hill Enterprise, a non-profit partnership formed by 11 artists.[17]

Emily Hill Enterprise rents out the villa’s indoor and outdoor spaces for wedding events, art exhibitions or workshops to facilitate collaborations between arts and business. [19]

As of 2019, the Mount Emily Villa is also home to Kult Kafé, a neighbourhood bar with a performance space. The bar is part of the Emily Hill Enterprise. Opened in November 2015, Kult Kafé has hosted a series of community-driven events such as outdoor screenings of local and foreign films and poetry performances.[20]