Mohamed Abbas Sheyed Ebramsa (born 1991) is the co-founder of Onelyst and Rely, both of which are financial technology (FinTech) start-ups based in Singapore.[1] At 25 years old, he was one of the young industry leaders to be featured on Forbes' '30 Under 30' Asia list.[2] Apart from his entrepreneurial achievements, Mohamed Abbas has also contributed to the community through his volunteer work and his service with Youth Corps Singapore since 2014.[3][4][5] In October 2015, he was awarded the National Youth Achievement Award (Gold).[6] He was also the only Singaporean recipient of the 11th ASEAN Youth Award.[7] Most recently in 2019, Mohamed Abbas was appointed by the Ministry of Culture, Community, and Youth as one of the youth leader panellists in the SG Youth Action Plan.[8][9] 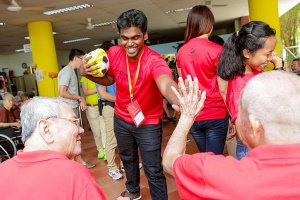 Mohamed Abbas was from a low-income family in which his parents were hawkers.[10][11] Growing up, his family of five lived in a one-room rental flat.[12] Speaking about his parents in 2016, Mohamed Abbas said:

"Their day started at 5am, and ended as late as 9pm... Despite our financial situation, my parents set aside some money every month to donate to the underprivileged in Singapore. They were my role models."[13]

Mohamed Abbas was a student at Outram Secondary School.[14] After secondary school, he furthered his studies at Singapore Polytechnic and subsequently, Nanyang Technological University (NTU) where he studied banking and finance at the university's business school.[13][15] Speaking to his alma mater about his earlier community initiatives as a student, he said:

While in NTU, he initiated Gourmet Guru, a social enterprise that allows low-income Malay housewives in Singapore to earn extra income.[3] In 2014, he also represented the school at the 5th University Scholars Leadership Symposium in Phnom Penh.[13] That same year, Mohamed Abbas took a two-year leave of absence to establish his first business endeavour, OneLyst.[12] He graduated from NTU in 2018 with a Bachelor of Business.[17] 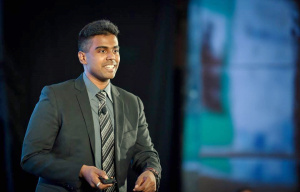 Mohamed Abbas at the Asian Bankers Summit in 2016. Photo from source.

Speaking to Vulcan Post in 2017, Mohamed Abbas said the following about entrepreneurship:

"Before founders start a company, they should convince themselves that they are solving a problem that will improve millions of people’s lives for the better... believe in the cause you are fighting for, rally a team, and work hard towards your vision."[12]

In March 2017, Mohamed Abbas was given a special mention by Dr Janil Puthucheary, then-Minister of State for Communications and Information and Education for his entrepreneurship endeavours.[18]

Mohamed Abbas founded Onelyst in March 2015 with Hizam Ismail. The financial platform was conceptualised a year earlier when the two co-founders realised that blue-collar workers did not have safe access to credit.[19] Speaking to The Straits Times in 2016 about Onelyft's vision, Mohamed Abbas said:

"In Singapore, there is still a section of the society excluded from mainstream financial services... These troubled people (low-income borrowers) usually don't have the time and state of mind to compare and get the best rates, even though they desperately need to save those cents and dollars. We want to help them make these informed financial decisions."[10]

Mohamed Abbas and his co-founders first rolled out Rely in November 2016 as a product offered by his first business, Onelyst.[20] It began as a short-term loan service that allows blue-collar workers to buy gadgets.[21] The platform has since evolved as a service for young consumers to pay for their purchases through interest-free instalments.[22] The start-up is backed by investors such as Goldbell Financial Services and Octava.[23]