Mister Donut is an international doughnut chain that opened a pop-up store in Singapore, in 2022.[1] The American brand is known for its Pon De Ring doughnut, a Japanese-inspired treat made of eight dough balls that form a ring. 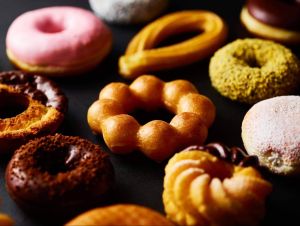 Mister Donut was started in 1955 by Harry Winouker.[2] He is the brother-in-law of Bill Rosenberg, the founder of doughnut and coffee chain, Dunkin’ Donuts.[2][3]

In 1990, Mister Donut was acquired by the then parent company of Dunkin’ Donuts, Allied-Lyon.[3] Thereafter, all its US stores had to either close down or convert itself to a Dunkin’ Donuts outlet.[3]

Blowing up in Japan[edit | edit source]

In 1971, Mister Donut opened its first store in Japan, following Dunkin’ Donuts which had done the same a year earlier.[3] Yet, Mister Donut met with an unexpected big break, finding greater success outside of home. In particular, its Pon De Ring doughnut quickly became a big hit once it was released in 2003.[5] As of 2022, it is the largest doughnut franchise in Japan and one of the most popular fast-food chains there, with over 900 operating outlets.[3][5]

On the other hand, its competitor Dunkin’ Donuts did not fare as well and pulled out of the Japanese market in 1998.[3] 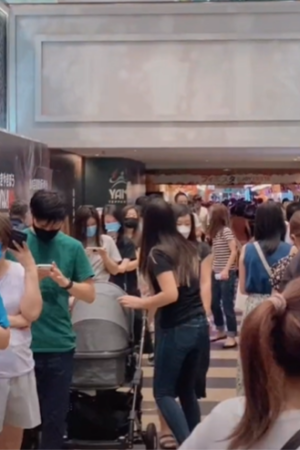 Long queues at the pop-up kiosk. Photo from TikTok.

It was announced that the pop-up was launched for a limited time only, as part of a month-long “market test” that will go into the chain’s future decision to launch a permanent outlet in Singapore.[1]

Made headlines upon its arrival[edit | edit source]

Mister Donut appeared on the local news after it sold out at 1PM on its first day, just 2 hours after it opened in the morning.[7][8][9] Local news outlets reported snaking queues along the entire stretch of WAttention Plaza, with customers queuing up to 5 hours.[9] At around 1PM, security officers proceeded to cut off the queue with barriers as the doughnuts had been sold out.[7]

As a result of the overwhelming turnout, the Mister Donut outlet decided to restrict its customers to a limit of 30 doughnuts per person.[7] As of late-July 2022, this number has since been reduced to 10.[7]

The doughnut chain pop-up kiosk was met with mixed reviews.[7] On one hand, its products seem to have received a more-than-warm welcome from Singaporeans, many of which are fans of the mochi Pon De Ring doughnuts. On the other hand, there were lukewarm ratings that expressed that their expectations were not met. 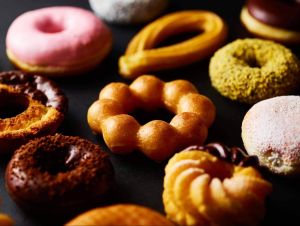 Mister Donut has as many as 16 flavours for customers to choose from. Photo from Facebook.

One of the chain’s best-selling flavours, the Pon De Ring appears to be in the shape of a ring formed by eight mochi-dough balls.[7] On top of the original sugar-glazed version, it also comes in a strawberry-white chocolate glaze.

The Angel French is a simple French Cruller that’s filled with whipped cream, and has a smidge of chocolate sauce on its corner.[7]

The Honey Dip is a classic doughnut with a honey glaze.[7]

Mister Donut’s Custard Cream is a bombolone, a traditional custard-filled donut with a little sugar dust on top.[7]

The Coconut Chocolate is a part of Mister Donut’s Old-Fashioned doughnut line, soft and dense rings with an assortment of toppings like coconut flakes and crunchy nuts.[7]