Melissa Koh (born 16 May 1989) is a Singaporean lifestyle blogger and YouTuber (YouTube channel). She is the founder of the fashion label 'Run After' (official website) and owner of the online retail store 'Some Days at Home' (official website). As of February 2020, she has more than 267,000 followers on Instagram and more than 11,000 subscribers on YouTube. As an influencer, Melissa has worked with lifestyle, beauty and fashion brands on advertorials. This includes names like Tiffany & Co, Swarovski and Singapore Airlines. In 2017, she was an ambassador for Fujifilm.[1] 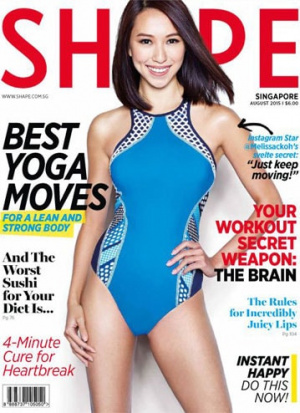 Melissa Koh on the front page of SHAPE magazine in 2015.

The oldest of 4 siblings, Melissa has two younger sisters and one younger brother.[2] Her father passed away when she was 2 years old. Melissa, her mother and grandmother relocated to Switzerland due to her mother’s work commitments at the time.[3] She is Catholic and attends the Church of the Risen Christ where she was engaged and married to her husband James Chen.[4] Melissa has a son, Noah, who was born in May 2019.[5] She had publicly announced her pregnancy on 8 January 2019.[6]

Melissa enrolled into CHIJ Toa Payoh Secondary School when her family moved back to Singapore. She then furthered her studies in the National University of Singapore (NUS) where she majored in Finance and graduated with a Bachelor in Business Administration in 2011.[7] After completing her tertiary studies, she worked as an equities associate at Credit Suisse for 2 years.

Melissa started blogging at about 15 years old and continued to do so throughout her time at Credit Suisse.[8] As of August 2019, Melissa's site consists of entries about motherhood tips based on her own experiences, home and living posts and style diaries, to name a few.

Through her social media platforms and her blog, Melissa has collaborated with brands such as Moët & Chandon, Hera Beauty, Revolve, Dior, Coach, Kate Spade, Tods, Carolina Herrera, Tiffany & Co, Swarovski, Singapore Airlines, The Belmond Group and various hotels and tourism boards. Over the years, Melissa has been featured in publications such as The Straits Times, The New Paper and Her World Singapore. In 2015, she was the cover girl for SHAPE magazine. 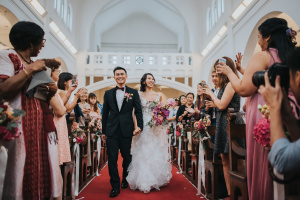 During a university exchange programme at the University of Washington in 2011, Melissa met Jonathan Raedeke. The couple were in a long-distance relationship for about four and a half years before splitting up in July 2015.[9]

In October 2015, Melissa uploaded a YouTube video featuring her childhood friend and new boyfriend, James Chen.[10] In a 2016 interview with Her World, James revealed that he resigned as a finance analyst to be Melissa's paid photographer.[11] The couple were officially engaged at Church of the Risen Christ in September 2016.[12]

Melissa and James flew to Paris, France for their engagement shoot in collaboration with The Wedding Scoop. They were photographed by Claire Morris and filmmaker Chris from Zen Film Works.[13] In 2016, the couple held a private engagement event in Bali, Indonesia.[14]

Melissa and James were married in August 2017. Their two-day wedding comprised of a church wedding ceremony, gatecrash and dinner banquet at The Ritz Carlton, Millenia Singapore.[15][16][17][18] Melissa and James faced backlash for their "sponsored wedding". However, Melissa revealed that although there were sponsorships, the couple still spent a hefty amount on the wedding.[19] 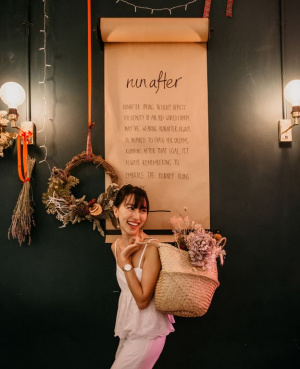 Melissa at her Run After Launch Party in 2018. Photo from Melissackoh.com.

This first collection was available for purchase on Zalora and at the Buro pop-up in Scotts Square.[22]

Melissa relaunched the brand in 2018 after a one-year hiatus from the business.[23] To her, the name Run After symbolises the act of pursuit and the vision of the fashion label to inspire customers to chase their dreams.[24] The fashion label prioritises high-quality fabric and textiles for its apparel range.[25] The label features a range of tops, bottoms and dresses ranging from S$79 to S$149.

Melissa launched her home and lifestyle brand 'Some Days at Home' in 2018. Described as her passion project, Some Days at Home is a site for Melissa to curate local brands and promote their products. The project is a way for her to feature smaller brands with high-quality products that she can vouch for.[26]

As of August 2019, the site features products ranging from up-cycled wood earrings to soaps made by single mothers. Melissa revealed that the profits made from the online store will be donated to The Assisi Hospice.[27]