In episode 6 of Toggle web series 'I Want To Be A Star'《小咖大作战》, Singaporean actor Shane Pow who is of Chinese ethnicity donned ‘blackface’ in order to pose as an African. Toggle and Mediacorp received backlash as the content was deemed racially insensitive. The practice of painting one's face black for entertainment purposes originated in 19th century North America. Ethnically Caucasian entertainers who performed exaggerated and comedic portrayals of African slaves would paint their faces black with shoe polish or burnt cork.[1] 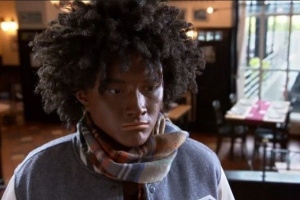 Shane Pow in Blackface for 2016 mandarin Toggle series "I Want To Be a Star". Photo credit to Popspoken.

On 19 September 2016, Episode 6 of the mandarin Toggle web series ‘I Want To Be A Star’《小咖大作战》 was aired. The main plot of the web series centered around the indispensability of acting extras in showbiz. The show tracks the characters' development from acting in minor roles to eventually becoming the main lead actors and actresses in various productions. Certain dialogue in the episode were not well received, with lines such as “there is no difference between an Indian and an African" delivered by the main character who was played by local veteran actor Chew Chor Meng. The show also enforced certain racial stereotypes, as Shane Pow wears an afro wig and paints his face black to portray an African character. By doing so, the actor portrayed a ‘blackface’ representation, which is frowned upon in media, especially in current times.[2]

On 26 October 2016, Toggle issued an apology on their Twitter account stating that the episode in question had been removed. The apology garnered negative responses from netizens, specifically due to the line "perceived as being racially insensitive by some viewers".[3] Many felt that Toggle was not taking full responsibility of their misstep and did not recognise that the content that they produced was inherently racially insensitive. They felt that Toggle was redirecting that responsibility towards viewers who were offended by the content.

The Info-communications Media Development Authority (IMDA) issued a financial penalty of SGD$5,500 to Mediacorp as the programme had breached the clauses on race under the FTA TV Programme Code.[4] Anil Nihalani, who oversaw Toggle at the time of the incident issued a statement to The Straits Times. He apologised for the blackface portrayal and asserts that Toggle and Mediacorp "takes race-related issues very seriously and that portrayal should not have happened". He also adds that the scenes in question have been duly removed from the programme, and that Toggle will "ensure something like that doesn't happen again".[5]