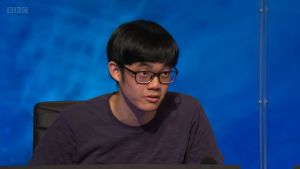 Maximilian Zeng (Max Zeng) is a 22-year-old Singaporean university student. He is best known for his performance on long-running British television quiz programme University Challenge, where he displayed extensive knowledge on geography, and impressed viewers with his ability to identify cities and states in India.[1]

Max is a third-year student at Imperial College London, pursuing a Bachelor of Science in Biochemistry.[2] He had previously studied at Hwa Chong Institution.

In an interview with CNA, Max revealed that he received his first world map at the age of three and by six, was able to identify all the countries and capitals.[2] Growing up, he liked to stare at maps to the point where he had to be “banned from the atlas” when he was in Primary Five as it was hindering his level of concentration in class.

“I had a globe next to my bedside at like three years old, and I just memorised everything on it. And then I got my Geographica which was a (roughly) 600-page, A4-size for-scale world atlas when I was six years old. Again, I just spent all day looking at it.”[2]

He also stated that, ironically, he did not choose to study geography at university as his main interests were in linguistics, anthropology, and language distributions instead. Zeng also mentioned that anything outside the sphere of science, technology, engineering and mathematics (STEM) in the classroom would make him lose interest very quickly.[2] Example of a question asked on identifying the city and state in India. Photo screenshot from YouTube.

Max is best known for his participation and performance on British television quiz show University Challenge. The show pits 4-member teams of students from universities around the UK against each other to see who can come out tops in various fields of academic knowledge.[3]

Max rose to fame after his appearance on Episode 26 of Season 51, in which Imperial College London faced King’s College London during the quarterfinals stage of University Challenge. Imperial College London won the challenge with a score of 235 to 50.[3] During the episode, Max was able to quickly identify cities and states in India without any clues, earning him monikers such as “The Human Atlas” and “GPS Zeng”.[2] In previous episodes, he aced other geography-related questions such as identifying countries based on their borders.

Professing to be a “quite conservative” player, Max cited that he does not hit the buzzer to answer a question unless he “absolutely knows the answer”. However, he has “auto buzzed” in rounds involving maps or when an answer becomes obvious beyond a certain point in the question.

In the latest episode posted on 14 February 2022, Max and the Imperial College London team trumped the University of Reading in the next round of the quarterfinals, with a score of 225 to 120.[4] The win puts Imperial College into the semi-finals.

Max first shot to fame after his appearance and performance on Episode 26 of Season 51, in which Imperial College London faced off against King’s College London.[2] During the episode, Max was able to quickly identify cities and states in India without any clues, earning him monikers such as “The Human Atlas” and “GPS Zeng”.

Throughout various episodes featuring Zeng and the Imperial College team, viewers applauded Zeng for this extensive geography-related knowledge, and how he was a key asset of the team.[5] 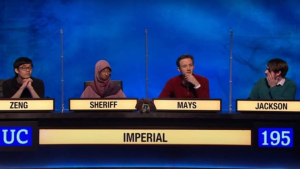 On 18 January 2022 (the day when the episode was first published on YouTube), UK media outlet The Daily Mail reported that Imperial College London team captain Michael Mays and team member Gilbert Jackson faced backlash on social media for their perceived condescending attitude to Zeng and other team member Fatima Sheriff.[6]

Citing various instances in the episode, it was reported that viewers took issue at how Mays appeared to ignore both Zeng and Sheriff at times, and seemed to rudely brush off the latter even though she was trying to help answer a question.