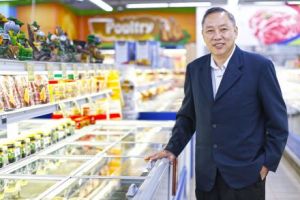 Photo from The Business Times.

Lim Hock Chee was born in 1961 and is the middle of nine siblings.[5] His two brothers, Lim Hock Eng and Lim Hock Leng, are also involved in Sheng Siong as the executive chairman and managing director respectively.[5][6]

Lim Hock Chee is an alumnus of Chinese High School (now Hwa Chong Institution), where he quit in secondary three due to difficulties in learning English.[5] After quitting his secondary education he did a two-year car mechanics course at Jurong Vocational Institute (now ITE College West) from 1976 to 1978.[7]

Lim Hock Chee is married to Lee Moi Hong, with whom he has four children.[5]

As of February 2021, Lim Hock Chee is the chief executive officer (CEO) and director of supermarket company Sheng Siong, which he started with his two brothers in 1985.[6] In 2020, Lim Hock Chee and his brothers were featured on Forbes as one of Singapore’s 50 richest people, being worth an estimated $1.2 billion dollars as of August 2020.[10]

As of February 2021, Sheng Siong currently has 63 operational outlets in Singapore and two stores in China.[11][6] The Sheng Siong Group’s expansion into China began in November 2017, when the company opened its first store in Kunming, Yunnan province.[12][6] Its second Kunming store opened in June 2019.[9]

During the COVID-19 pandemic in 2020, it was reported that Sheng Siong made a net profit of over 54% in the third quarter of the year due to increased demands of groceries from consumers who were working and spending more time at home.[13] The company also opened two new stores in Singapore during the fourth quarter of 2020, and Lim Hock Chee was quoted as having said the following:

“Moving ahead, we remain dedicated to our store expansion plans by continuously looking for suitable retail space, particularly in areas where our customers reside but we do not have a presence.”[13]

Lim Hock Chee has stated that his vision for the Sheng Siong Group would be to expand its presence in Singapore into newer estates such as Bidadari and Tengah, and also worldwide.[14][15] Lim Hock Chee was quoted as having said the following about Sheng Siong’s expansion plans:

“Taking the Sheng Siong brand overseas gave younger staff the opportunity to expand their horizons and to develop the brand further. Our vision is not confined to the Singapore market. We want to expand Sheng Siong globally.”[15]

Due to his success as a businessman, Lim Hock Chee has been appointed to several roles in various organisations and companies over the years. The following is a non-exhaustive list of his board appointments.

For his achievements in the grocery retailing industry and growing Sheng Siong to being Singapore’s third largest supermarket chain, Lim Hock Chee was named the 2018 Businessman of the Year at the Singapore Business Awards.[19][20] In a 2019 interview with Sumiko Tan of The Straits Times, he was quoted as having said the following about his achievement:

“We were happy but a little frightened at the same time. Happy because it acknowledges what we have done in the past, but frightened because we will have to think about how we can sustain it in the future."[5] 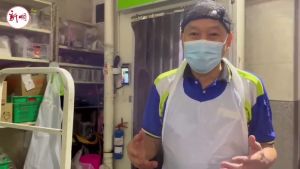 Mr Lim worked at the Commonwealth outlet for one week. Photo from MustShareNews

After four workers at Sheng Siong tested positive for Covid-19, the business faced manpower shortages in their Commonwealth outlet.[23] As finding last-minute replacements was too difficult, Mr Lim decided to volunteer himself and headed to the supermarket’s outlet on the morning of 13 March 2022 to fill in for his unwell staff.[23]

Mr Lim helped to arrange the pork produce into a basket, which he then brought to shelves and displayed neatly.[23] His wife also joined him in the process.[23] Both of them followed this routine for one week, working at the supermarket from 5am till noon.[23]