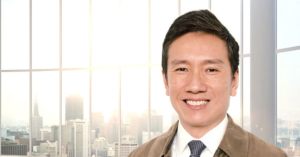 Lien We King (born 1975) is a Singaporean entrepreneur, as well as the Co-Founder and Executive Director of Mothership, a well-known Singapore digital news agency.[1] He is also the Managing Director of Bridgewater Holdings Pte Ltd, the parent company of Mothership.sg.[2]

Lien We King is a former fund manager and finance executive whose “hobby site” took off overnight, after its article “48 reasons why you still feel for Singapore” went viral in February 2014.[3][4] Today, this joint venture with fellow entrepreneurs Martino Tan and Belmont Lay has become well-known among Singaporeans as the online news site, Mothership.sg.[2][5]

Besides his role at Mothership.sg, Lien We King is currently the Managing Director of Bridgewater Holdings Pte Ltd, and a Board Member of real estate and property developer, Hong Lai Huat Group.[2] 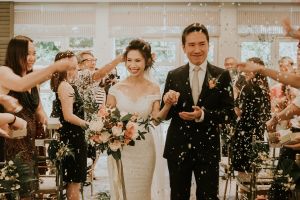 Kiara Khor and Lien We King walking down the aisle at their wedding. Photo from Singapore Brides.

In 2018, Lien We King solemnised his marriage to healthcare strategies professional, Kiara Khor.[6] The couple celebrated this event with a wedding ceremony at Shangri-La Hotel Singapore.[7] Kiara is noted to have worked at Mothership.sg as a Market Analyst in 2014.[6] 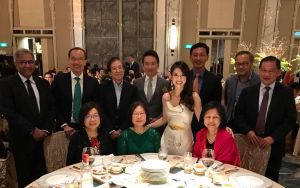 George Yeo present at Lien We King and Kiara Khor's wedding in 2018. Photo from Facebook.

He is also known to be friends with former Foreign Minister, George Yeo, a former politician who was the Minister of Foreign Affairs (2004-2011). Yeo took on the role of “Non-Executive Advisor” and writer at Mothership.sg.[8] Yeo was also present as a guest at Lien We King's wedding in 2018.[9]

Lien We King was also one of supporters who stood in for George Yeo to collect Presidential election forms while Yeo was on holiday in Taiwan with his family.[10]

Lien We King is one of the co-founders and the Executive Director of the Singapore news outlet, Mothership.sg.[1]

The digital news agency is currently funded by social enterprise, Project Fisher-men, where Lien We King assumes the role of one of its three directors.[11]

In 2012, Lien We King approached Belmont Lay, the founder of Singaporean satire site, NewNation.sg and Martino Tan, who was a civil servant working under the Prime Minister’s Office (PMO) at the time.[8] The latter was Senior Manager of online communications at the PMO, where he was best known for managing Prime Minister Lee Hsien Loong’s Facebook posts.[8] Both men would later on become his business partners, after he proposed a “digital-only platform for young Singaporeans”.[8]

In fact, the trio wanted to realise a common vision of creating an online site where Singaporeans can keep up to date with and educate themselves on Singapore’s social and political climate. They were “inspired by the ideals of openness, inclusiveness and creativity”.[8]

Later on, they were joined by former Foreign Minister, George Yeo and civil service veteran, Philip Yeo.[8] A friend of Lien We King, George Yeo occasionally contributes as a writer, where he shares his perspective on Singapore life as well as life away from his homeland as he is based in Hong Kong.[8] On the other hand, Philip Yeo is the Chairman of social enterprise Project Fisher-men, which backed Mothership.sg with funding in its early days. Today, Yeo continues to “volunteer” as the Chairman of Project Fisher-men.[8]

Prior to launching Mothership.sg, Lien We King had been a Director at Pacific Equity Group Pte Ltd, a private equity real estate investment firm. Later on, he became the Managing Director of Bridgewater Holdings Pte Ltd and was appointed to the Board of Hong Lai Huat Group as Non-Executive Independent Director on 1 March 2019.[5]