Leong Sze Hian (born November 1953)[1] is a Singaporean financial adviser and socio-political blogger who was a contributor on the website, The Online Citizen.[2] He was also a political candidate under the Peoples Voice party during the 2020 Singapore General Elections.[3] In 2018, Singapore’s Prime Minister, Lee Hsien Loong sued Leong Sze Hian over a defamatory article that he had shared on Facebook.[4] As of October 2020, he has over 3,000 followers on his Facebook page.

In a 2020 interview with Thum Ping Tjin, Leong Sze Hian shared that he has been analysing government statistics for about 20 years.[5] Apart from writing for websites, his letters concerning government policies and their impact on Singaporeans have been published by newspapers like TODAY.[6][7][8] Over the years, Leong Sze Hian has also spoken at Hong Lim Park, addressing issues relating to the Central Provident Fund (CPF)[9] while also pressing for accountability from the Singapore government.[10] According to several reports from The Straits Times, Leong Sze Hian was once an insurance agent with American International Assurance (AIA) in the 1980s.[11][12] 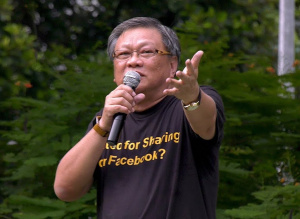 Leong Sze Hian was born in November 1953. Sharing more about his childhood in a 2010 interview with The Online Citizen, He said:

"There was a time when I had a driver send me to school in a Mercedes. I had unlimited pocket money. And I brought all my classmates out for lunch. Subsequently, my father became bankrupt. I didn’t even have pocket money to go to school."[1]

Leong Sze Hian is an alumnus of Raffles Institution.[14] In a video interview published in 2014, Leong Sze Hian shared that he did not pursue a full-time university education directly after his pre-university studies.[15] Instead, he started working before completing a course for the Institute of Administrative Management (IAM) in 1976. In turn, he received two diplomas in Organisation and Methods and Administrative Management.[16] Since then, Leong Sze Hian has reportedly received 13 professional qualifications, two Bachelor's degrees in Economics and Insurance and three Master's degrees from schools such as the Harvard Business School.[17][18]

Leong Sze Hian is the main author of his eponymous website, leongszehian.com. His first article titled "PAP 2006 election manifesto promise – success or failure?" was published on 2 November 2010.[19] He has also written articles for the website, The Online Citizen (TOC) between 2009 and 2018.[2] According to the website's archives, his earliest article titled "PM Lee displayed false humility" was published on 13 June 2009.[20] In a 2011 news report by TODAY, Leong Sze Hian was named as one of the main volunteers for TOC alongside Ravi Philemon, Joshua Chiang and Siew Kum Hong.[21]

Leong Sze Hian joined the PV after being approached by the party chief, Lim Tean.[22] In July 2020, Leong Sze Hian was announced as a member of the Peoples Voice team that contested in Jalan Besar GRC.[3] In his candidate introduction video, he said:

"A good member of parliament must have the heart of the people. They must ensure that policies made by the government put people first... I have had a wonderful 66 years growing up in Singapore, but it pains me to see so many Singaporeans struggling to make ends meet... My experience, I hope, can bring more transparency and accountability in parliament."[23]

The PV team garnered 34.64 per cent of the votes, losing to a People's Action Party team that was led by Singapore's Minister of Manpower, Josephine Teo.[24] 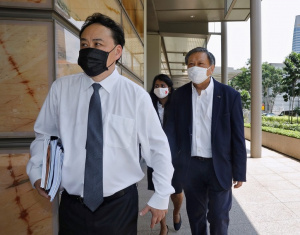 Leong Sze Hian (right) and his lawyer, Lim Tean (left) outside the High Court in 2020. Photo from source.

On 7 November 2018, Leong Sze Hian shared an article by the Malaysian news site, The Coverage that mentioned “secret deals” between PM Lee and Malaysia’s Prime Minister, Najib Razak to launder money from Malaysia Development Berhad (1MDB).[25] These allegations were seen as a malicious attempt to tarnish PM Lee’s reputation.