Lee Wei Ling (born 1955) is a Singaporean neurologist. She started her career at Singapore General Hospital’s medical unit in the pediatric ward.[1] She then became a Director at the National Neuroscience Institute (NNI) following Simon Shorvon's dismissal in 2004.[2] Daughter to the late Lee Kuan Yew, Lee Wei Ling is also the younger sister of Lee Hsien Loong and older sister of Lee Hsien Yang. As of June 2020, her Facebook page has over 24,000 followers.

Lee Wei Ling is an established medical professional. She was awarded a Fellowship of the Royal College of Physicians (FRCP) in recognition of her expertise, innovations and contributions to the medical profession.[3] Lee Wei Ling also obtained a board certification from the American Board of Clinical Neuropsychology (ABCN) for her competence in Clinical Neuropsychology.[4] 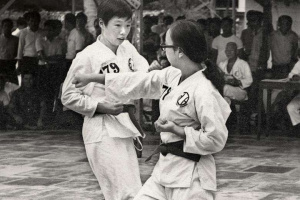 At 13 years old, Lee Wei Ling started taking karate classes with Singapore Karate Association. She received her orange belt six months later. Within the next two years, she became one of the youngest girls in Singapore to qualify for a karate black belt.[5][6] In a letter to The Straits Times that was published in August 2012, Lee Wei Ling shared that she grew up in a frugal household.[7]

Lee Wei Ling was educated at Nanyang Primary School, Nanyang Girls High and Raffles Institution. She furthered her studies at the National University of Singapore (NUS) where she graduated with a Bachelor of Medicine and Bachelor of Surgery (MBBS), being the only graduate to have passed with honours.[8] At 23 years old, Lee Wei Ling received five awards on her graduation ceremony for her academic excellence. The awards were - the Gubbe Gold medal, Ciba-Geigy Prize, Singapore Medical Association silver medal, Yeoh Khuan Joo gold medal and the Singapore Dermatological Society book prize.[9] She then pursued a Masters of Medicine in Pediatrics, MMed (Paed) and a postgraduate surgical diploma, MRCP(UK) (Paed).[10] 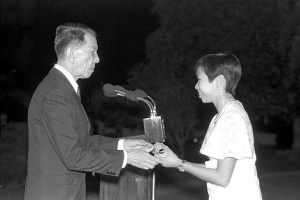 Lee Wei Ling graduated with eight distinctions for her GCE 'O' Level examinations[11] and became a President’s Scholar after scoring nine distinctions for her GCE 'A' Level examinations.[12] She was also the top science student in her school.[13] Lee Wei Ling received her President’s Scholar Award from former President Benjamin Henry Sheares at the Istana on 1 July 1973.[14] 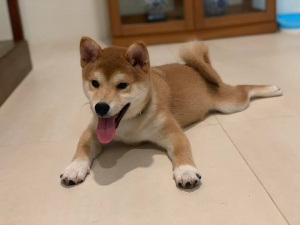 Lee Wei Ling is unmarried by choice. In a 2011 letter on The Straits Times, Lee Wei Ling shared that her late father had once talked to her about marriage. He expressed that although he and his wife (Kwa Geok Choo) saw the benefits of her choice, they were worried that she would be lonely without a partner.[15] Lee Wei Ling focused on living her single life to the fullest, accompanying her father on overseas trips following her mother's passing in 2010.[16]

Lee Wei Ling bought a puppy Shiba Inu named Hiro in July 2019. In a Facebook post, she admitted that she considers it more of a privilege to care for the “lovable rascal” than having a family of her own.[17][18] In August 2019, Lee Wei Ling shared her love for dogs on Facebook and revealed the names of her previous canines. She had two Labradors named Nicky and Wong Cheng, followed by a cocker spaniel named Toffee. During her adolescent years, her family had a black Labrador named Lab Bonnie.[19][20]

Before 2016, Lee Wei Ling wrote regularly with The Straits Times and its subsidiary, The Sunday Times. Her column articles were about a plethora of subjects. Lee Wei Ling covered a variety of topics ranging from her personal life[21] to her views on philosophy, religion[22] and society. 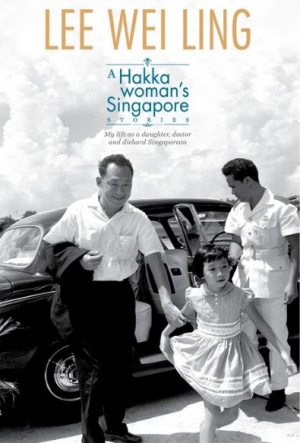 A Hakka Woman's Singapore Stories was a compilation of Lee Wei Ling’s seventy-five columns on The Straits Times over 12 years.[23] It was compiled and published by The Straits Times Press on September 2015.[24] In an interview with The Straits Times, Lee Wei Ling shared that she embraces her eccentricity and candid nature, not wanting to conform to normal standards. She also shared that her convictions drive her character, which can be gathered from the content of her writing.[25]

Conflict of interest with The Straits Times (2016)

In 2016, Lee Wei Ling announced on Facebook that she "will no longer write for SPH”.[26] She revealed that parts of her unedited article were considered unfit for publishing. The article in question was reportedly about Lee Kuan Yew's first death anniversary. Lee Wei Ling has posted the unedited version of the article in question on her Facebook page and it can be read here.

Associate editor, Ivan Fernandez published an article addressing Lee Wei Ling’s allegations. He claimed that the article in question had to be “honed and language tightened” and that parts of her content fell under plagiarism.[27] Lee Wei Ling then defended her writing on Facebook.[28] An excerpt from Lee Wei Ling’s Facebook post reads as such:

“My then SPH editor, Ivan Fernandez’s first response to my draft which included commemoration for Mao and Churchill … There were 5 subsequent emails with regards to this draft, never did Ivan bring up the issue of plagiarism… whether I intentionally plagiarized or as a filial daughter I wanted to stop any attempts at hagiography at the first anniversary of my father’s death.”[29]

She explained that by comparing Mao and Churchill’s death commemorations to her father’s, she had only wanted to prevent a potential formation of a personality cult around her late father. Lee Wei Ling has since moved on to posting regularly on her public Facebook page instead.

Lee Wei Ling is passionate about her work as a doctor. As a former Director of National Neuroscience Institute (NNI), she reminded her colleagues that:

"The purpose of our existence and the measure of our success is how well we care for all our patients”.[30]

Over the years, Lee Wei Ling has been involved in debates surrounding ethical transgressions in the medical community.

In 2008, CK Tangs chairman, Tang Wee Sung was charged for trying to purchase a kidney for his kidney transplant. This incident sparked debate within the medical community[31][32] and prompted certain lawmakers to rethink the Human Organ transplant Act (HOTA).[33][34] Wee Sung was given a one-day jail sentence and S$17,000 fine. Lee Wei Ling criticised the court’s ruling in an article on The Straits Times in which she described the punishment as a “token sentence”.[35] She also posited that individuals should be able to receive monetary compensation if it makes them more willing to donate their organs.[36][37]

In 2006, Lee Wei Ling expressed her discontent with the Agency for Science, Technology, and Research (A*Star) and its policy direction on The StraitsTimes.[38] She believed that A*Star should use “billions of taxpayers dollars” more efficiently. Her actual words are as such:

“We should target our research on these areas where not only is it relevant to Singaporeans, but we also have an advantage over foreign countries with much more advance[d] research facilities… more rational approach will be to identify niche areas unique to the Singapore... a competitive advantage. Examples include hepatitis B, primary cancer of the liver, stomach cancer, systemic lupus erythematosus (more often known as SLE or lupus) and other autoimmune disease (where the body's immune system attacks the body's own organs), and the pattern of strokes and head injury.”[39]

Lee Wei Ling’s criticisms sparked a debate in the biomedical community.[40] Phillip Yeo responded by citing the high relevance and potential of A*Star. In an interview with TODAY, he stated that A*Star and the biomedical sector value-added to Singapore’s manufacturing output by 30 percent in 2006.[41]

In 2002, the Singapore government funded a S$5.6 million study of Parkinson's disease and two other medical disorders. The study was headed by Simon Shorvon who was then the Director of the National Neuroscience Institute (NNI). Lee Wei Ling was a part of this study.[42] In 2004, the Singapore Health Authority investigated the study after Lee Wei Ling announced her resignation from the project. Lee Wei Ling alleged that the study had not gathered proper consent from the patients back in 2002. An independent investigation in March 2004 revealed that the way the testing was done compromised the patients’ well-being and safety.[43] Simon Shorvon was dismissed as head of the NNI and was succeeded by Lee Wei Ling later that year.[44] 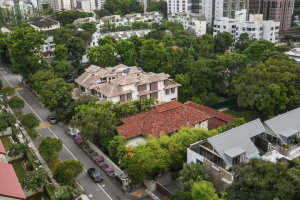 An aerial view of 38 Oxley Road. Photo from The Straits Times.

The two alleged that Lee Hsien Loong was abusing his power and accused his wife, Ho Ching of influencing the Ministerial Committee that was tasked to re-examine Lee Kuan Yew’s final will. PM Lee Hsien Loong denied these accusations and made a public statement on Facebook saying that his siblings have “hurt our father’s legacy”. He expressed his disappointment towards the public nature of their family dispute and apologised to the nation.[47]

After a parliamentary sitting in July 2017, Lee Wei Ling and Lee Hsien Yang released a 10-page public joint statement on Facebook detailing the summary of the dispute over the house, their previous accusations, supporting evidence and questions they had after the parliament session. They closed the statement welcoming Lee Hsien Loong’s wishes to settle the dispute privately. The siblings also agreed to stop posting any further evidence on social media on the basis that “we and our father’s wish [for demolishing the 38 Oxley Road house] are not attacked or misrepresented”.[48] 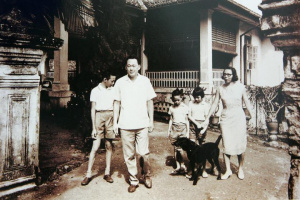