Kwee Liong Tek (born 1946) is the Chairman of the real estate development company, Pontiac Land Group and the co-founder of Capella Hotel Group Asia.[1] He is the second son of Pontiac Land Group’s founder, Henry Kwee. In 2020, Kwee Liong Tek was featured in Tatler Singapore’s ‘300 List’, a compilation of the most powerful and influential people in Singapore.[2] His four children, Evan Kwee, Melissa Kwee, Alison Kwee and Stephanie Kwee are the third-generation scions of Pontiac Land. 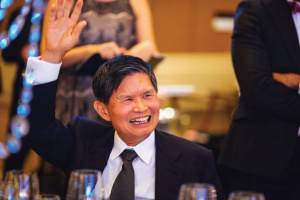 In 2020, Kwee Liong Tek and his three brothers, Liong Keng, Liong Seen and Liong Phing ranked ninth place on Forbes’ Singapore’s 50 Richest list.[3] Over the years, they have received significant media coverage for their wealth. Speaking to The Business Times in 2009, he reportedly said:

"We're just stewards of what was given to us by our father (Henry Kwee Hian Liong) and we hope we continue to honour his legacy".[4]

Henry Kwee passed away in 1988.[5] Kwee Liong Tek has also been recognised for his generous donations to Singaporean charities and non-profit organisations such as the National Heart Centre Singapore (NHCS).[6][7]

Kwee Liong Tek was born in 1946 in Bandung, Indonesia to Kho Lang Sit and Henry Kwee Hian Liong.[8][9] According to several reports, the family emigrated to Singapore in 1958.[9][10][11] Kwee Liong Tek is the second eldest of four brothers; all of whom hold senior executive and board positions in the company as of 2020.[12] His older brother, Kwee Liong Keng is the Managing Director of the Pontiac Land Group.

Kwee Liong Tek has been married to Donna Kwee (nee Aratani) since 1970.[13] His father-in-law was the late George Aratani, a Japanese-American businessman who founded Kenwood Electronics and Mikasa Chinaware.[14] Kwee Liong Tek has four children with Donna; Melissa, Evan, Alison and Stephanie. Their eldest daughter, Melissa is a prominent social activist in Singapore and their only son, Evan is the vice president of Pontiac Land Group.[15][16] Married to Evan Kwee is Claudia Sondakh, the daughter of the Indonesian businessman, Peter Sondakh who owns the Rajawali Corporation.[17] Kwee Liong Tek is also an avid art collector.[4][18]

As of September 2020, Kwee Liong Tek is the Chairman of the Pontiac Land Group. Under his stewardship, the company has since grown to be worth an estimated $5.4 billion, according to Forbes in September 2020.[3] 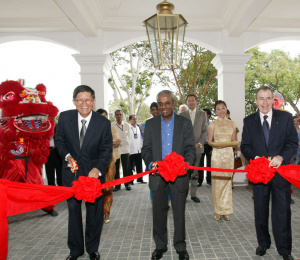 Kwee Liong Tek (far left) at the opening ceremony of Capella Singapore in 2009. Photo from source.

The following are some of the major development projects that had been undertaken by Pontiac Land Group during Kwee Liong Tek's tenure as the company's Chairman.

In 2010, Pua Seck Guan's Perennial Real Estate and the Pontiac Land Group bought the Capitol Theatre, Capitol Building, Stamford House and Capitol Centre for S$250 million.[26] The Kwee's Pontiac Land Group was involved in the commercial and residential redevelopment of the said buildings which were re-opened in May 2015.[27]

In October 2013, Pontiac Land Group invested a $300 million equity stake to kickstart the development of 53 West 53 (53W53), a luxury skyscraper in Manhattan, New York next to the Museum of Modern Art (MoMA).[28] Through this project, the Pontiac Land Group was the first-ever Singaporean real estate developer to embark into America.[29] In a statement to the press, Kwee Liong Tek said:

"We are delighted to partner with Hines and Goldman Sachs on this landmark project. We have long admired MoMA's contribution to the city and the world, and we are pleased that this project will expand its galleries and enhance the visitor experience".[18][30]

Designed by the renowned French architect, Jean Nouvel, the building houses a private condominium apartment complex and other amenities such a 65-foot indoor lap pool and a golf simulator, among others.[31]