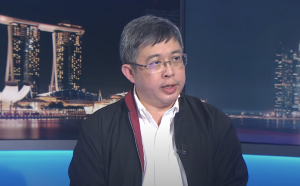 A screenshot of Associate Professor Kenneth Mak. Photo from CNA.

Associate Professor Kenneth Mak Seck Wai is Senior Consultant in General Surgery in Singapore. He is also Director of Medical Services at the Ministry of Health (MOH), a role which he has held since February 2020.

A/Prof Kenneth Mak holds a Bachelor of Medicine and Bachelor of Surgery from Singapore, as well as a Master in Medicine.[1] He is also a fellow of the Royal Colleges of Surgeons in Edinburgh and Glasgow and International College of Surgeons.

In 1997, he graduated from the SAF National Service Officers’ Staff Course as the top student.[2]

After graduating from medical school, A/Prof Mak started his professional career as a trainee at the National University Hospital, where he spent 13 years before moving to Alexandra Hospital to head the Department of Surgery.[3] He subsequently headed Khoo Teck Puat Hospital’s Department of Surgery.

He is trained as a general surgeon with subspecialty interests in hepatobiliary and pancreatic surgery, as well as in trauma surgery.[4] Notwithstanding his other appointments, he maintains his clinical appointments as a Senior Consultant surgeon in Khoo Teck Puat Hospital’s Department of General Surgery.

In 2016, he was awarded the Public Administration Medal (Bronze) (Military), in his role in the SAF as Commander of the 22nd Logistics Support Group.[5]

A/Prof Kenneth Mak was appointed Chairman of Medical Board at Khoo Teck Puat Hospital in June 2011, a role which he held for four years until December 2015.[6]

A/Prof Kenneth Mak was appointed Deputy Director of Medical Services at MOH in 2015. In the role, he oversaw the provision of health services in the primary care, community care and hospital settings, including mental health services.[7] He also co-led the Corporate Planning Team within MOH in 2015, looking at transforming the models of healthcare in Singapore, and Singapore’s long-term healthcare care model transformation strategy. He also led the Diabetes Program Office within MOH, which supports Singapore’s national efforts to control diabetes. He relinquished the appointment at the end of 2019.

Director of Medical Services at MOH

In December 2019, it was announced that A/Prof Kenneth Mak would be taking over A/Prof Benjamin Ong as Director of Medical Services (DMS) of the Ministry of Health, on 1 February 2020.[8] As DMS, he has been involved heavily in Singapore’s Multi-Ministry Taskforce set up to combat COVID-19, advising the taskforce on participating in the various press conferences 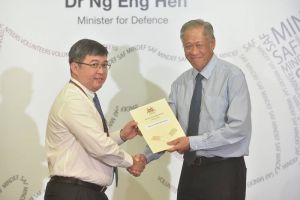 Since 2011, A/Prof Kenneth Mak, as COL (NS) (Dr) Kenneth Mak has been serving as a volunteer in the SAF Emergency Medicine Specialist Advisory Board.[9] In the role, he plays advisor to the SAF on peacetime medical support protocols and policies, to help MINDEF and the SAF benchmark their healthcare services against those of public medical centres.[10]

In 2016, COL (NS) (Dr) Kenneth Mak was appointed co-chairman of the medical committee for NDP 2016, while he was Deputy Director of Medical Services at MOH.[11] His position as co-chairman saw him responsible for coordinating the various resources and personnel involved in the medical services for the parade.[12]

In an interview, A/Prof Kenneth Mak indicated that he is a fan of Japanese food as well as anything soupy, due to his Cantonese heritage.[13]