Kelly Kimberly Cheong (born 8 November 1994) is a 27-year-old Singaporean voice actress and TikTok personality. She is known for her self-defence and martial arts videos on TikTok, where she has over 338,500 followers and over 2.7million likes.[1] She is also part of a 14-actress cast for local movie production Ah Girls Go Army, directed by Jack Neo. 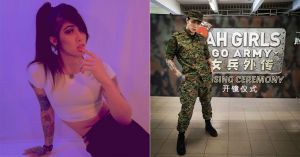 Kelly grew up in a single-parent home, after her father left when she was only two years old.[2] According to her, she first felt she was a girl in a boy’s body at six years old, but never thought anything was wrong until she was constantly bullied in primary school. In an interview with The New Paper, she detailed how she was called derogatory names, had her things thrown out of the window, and even hit with badminton rackets by her classmates.[2]

While in ITE, Kelly struggled with depression as she struggled to live up to her dying mother's expectations of her as a boy. When she was 18 years old, her mother passed away due to lung cancer. She subsequently tried to kill herself many times, and inflicted self-harm for two years after her mother’s death. She came out as transgender in 2013 and identifies herself as pan-sexual.[2]

In October 2021, it was announced that Kelly was cast alongside 13 other actresses in Jack Neo’s upcoming movie Ah Girls Go Army. The move, the newest instalment of Neo’s “Ah Boys To Men” franchise, was slated for launch on 1 February 2022.[3] As part of the movie’s recruitment drive, Kelly uploaded her audition clip on her TikTok and other social media channels, mentioning that she was auditioning for the role of “a recruit who is strong silent type (sic) and is trained in martial arts”.[4] 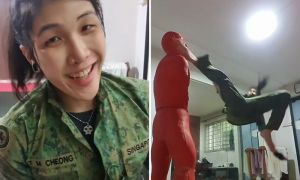 On 12 November 2021, Kelly posted a photo of her in an army uniform with her movie character’s name “Amanda Man”, as part of the movie’s publicity to unveil her look. While some congratulated her for the role in the movie, other netizens questioned the meaning behind her movie name, criticising the movie on how it was making fun of Kelly’s transgender nature.[5]

In an interview with AsiaOne, Kelly said that she was initially unperturbed about the name, clarifying that her role was a “cisgender, biological girl” and that she didn’t think of it as an insult to her transgenderness.[6] Regardless, she raised the issue of the online backlash with director Jack Neo, who explained to Kelly that her role was supposed to be a female tomboy, and not transgender. 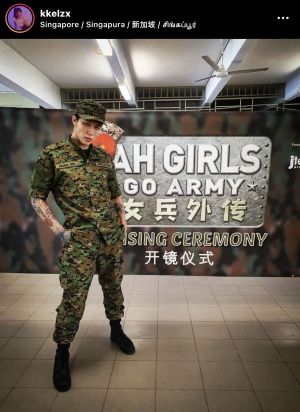 Neo subsequently apologised for the name, and clarified that Kelly “was cast specifically for this role for her fighting ability, not her gender identity”. However, he understood that “some people are not comfortable with the character's name, which had been interpreted as a reference to her trans identity”.[7] He added that Kelly’s character would be renamed.