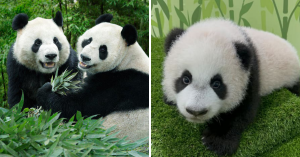 Kai Kai (凯凯) and Jia Jia (嘉嘉) are the panda residents of River Wonders (formerly River Safari), who arrived in Singapore from China in 2012 with a 10-year loan given by Chinese authorities.[1] This is part of a collaboration between the China Wildlife Conservation Association and Wildlife Reserves Singapore to mark the 20th anniversary of China-Singapore relations.[2]

CapitaLand is the main conservation donor of the programme, which aims to increase awareness for panda conservation and establish a breeding programme for these rare animals.[3] As of 2022, there are only 1,864 pandas left in the wild.[4]

Kai Kai and Jia Jia hail from Ya’an Bifengxia Panda Base, which is two hours away from Chengdu City in China’s Szechuan province.[5] 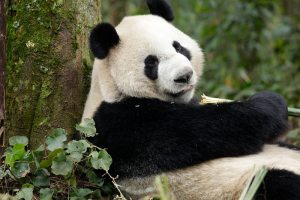 Kai Kai is a male giant panda who was born on 14 September 2007. Initially, he was shy and would prefer to dine solo. Now, he has become more outgoing and active, while remaining amiable and obedient. His favourite activities include eating carrots and licking his paws.[5] Kai Kai has a pink nose and a small tuft of fur on his head, which earned him the moniker “Onion Head”.[6] 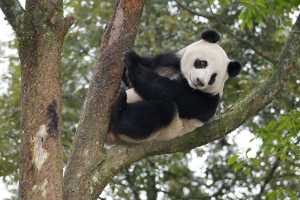 Jia Jia hanging out in a tree. Photo from Wildlife Reserves Singapore.

Jia Jia is a female giant panda who was born on 3 September 2008. She has a black nose. Her personality is playful as well as affectionate. Her favourite activities include eating, as well as climbing trees, sometimes even bringing bamboo up to a tree to eat.[5]

Kai Kai means “victorious” in Mandarin, and Jia Jia means “beautiful” in Mandarin. Both their names were chosen out of a nationwide naming contest.[6]

Both Kai Kai & Jia Jia stay in Southeast Asia’s largest giant panda exhibit, located at the Yangtze River zone of River Wonders. The exhibit is set at a temperature of 18-22 degrees Celsius with controlled humidity, and is designed to replicate a bamboo forest with streams, trees and boulders for an environment similar to a panda’s natural habitat.[5] 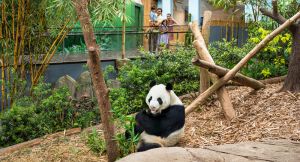 Exhibit at the Yangtze River zone, which also has other wildlife like the giant salamander and red panda. Photo from Changi Recommends.

Kai Kai and Jia Jia had their first attempt at mating on April 17, 2015, which was 3 years after their arrival in Singapore. [7]They have mated 7 times over the course of their stay here,[8] and it’s a challenging task as pandas only have a window of 2-3 days to get pregnant.[9]

As part of efforts to encourage mating, Kai Kai was trained with squat exercises to strengthen his hind quarters and improve success rates. He was also shown videos of pandas mating.

As for Jia Jia, she was given folic acid prenatal and pregnancy supplements as well as conditioned daily for cub retrieval and urine collection. The urine is used to monitor and confirm pregnancy.[6] Keepers also got both pandas to swap exhibits, as smelling the scent of another gender would stimulate hormones and mating instincts.

Both artificial insemination and natural methods were also attempted.[7] 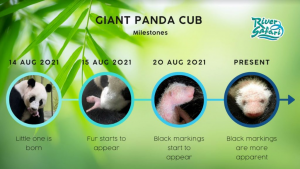 Milestones of a giant panda cub. Photo from River Safari.

The seventh mating attempt led to the conception and birth of a baby panda cub on 14 Aug 2021, who weighed around 200g.[6]

When the cub was first born, mother Jia Jia would wake up to nurse the cub, clean it and help it defecate.

Keepers were initially worried over how she would respond to the cub:

“We were worried that she (would be) either possibly aggressive, she might abandon the cub, or she would take good care of it ... (When) we saw her picking up the cub so gently and just seeing her care for it, it was really a big sigh of relief for all of us.” [13]

The first two weeks, Jia Jia did not eat much and had to be fed an electrolyte glucose solution to keep her hydrated. After 16 days, she started eating leaves again.[14] 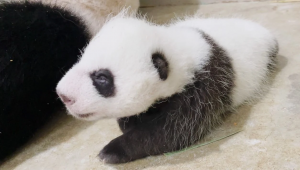 The cub opened its eyes 40 days after birth, and weighed 1.87kg then. It was also revealed to be a male cub, and the public was invited to suggest a name for him before his 100th-day milestone on Nov 21, 2021.

Le Le is set to return to China upon maturity at two years old under the terms of the original panda loan agreement with the China Wildlife Conservation Association.[17] However, Wildlife Reserves Singapore is speaking to China authorities on extending Kai Kai and Jia Jia’s stay in Singapore.[18]

In celebration of panda Le Le’s first birthday, River Wonders will be organising a month-long event, “Panda-stic Party”.[19] Besides visiting the panda cub at the Giant Panda Forest for Giant Panda Family Playtime (from 11:45am to 6:15pm), here are some activities that visitors can expect to participate in:[19]