Joanna Theng (born 1 March 1998) is a Singaporean actress and social media personality with a following of over 6,300 on Instagram and 123,000 on TikTok.[1][2] Following the online backlash to her video with City Revival Singapore, she privatised her TikTok and deactivated her Instagram account.[3][4] She has since made both accounts public. As of August 2022, she is Social Media Manager at her father’s company, EagleWings Group. She is also a part-time Copywriter at Colours Global.[5]

Born on 1 March 1998, Joanna Theng is the oldest of three siblings. She has two younger brothers and is the only daughter to the Singaporean ophthalmologist, Julian Theng.[6][7][8] 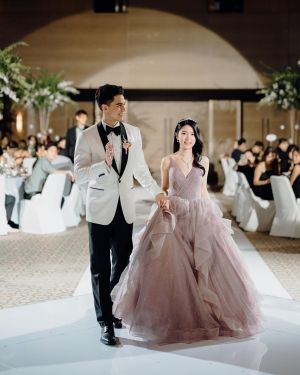 Joanna Theng walks down the aisle with her husband, Jonathan Bowness. Photo from Instagram.

In 2022, she married Jonathan Bowness, an NTU student and part-time Film Editor who also works at the EagleWings Group.[9][10]

Joanna Theng was a student at Methodist Girls School (Secondary) and Anglo-Chinese Junior College.[11] In 2017, she enrolled in the Wee Kim Wee School of Communication and Information (WKWSCI) at Nanyang Technological University (NTU), before graduating in 2021.[5][12]

As a Sunsilk Singapore ambassador,[13][14] Joanna Theng has appeared in several commercials and advertorial campaigns for the brand.[15] In one of these commercials, she was listed as a "Starlist Artiste".[16] Starlist is a talent agency founded by celebrity hairstylist, Addy Lee.[17] Joanna Theng was reportedly signed to Starlist in 2017. In 2018, she was one of the artistes featured in a short Chinese New Year music video produced by Mediacorp Channel 8.[18] 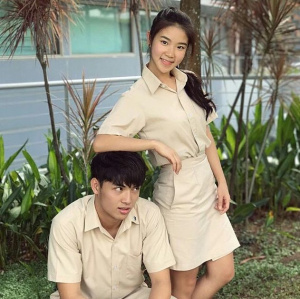 Joanna Theng pictured on the set of While We Are Young Z (2017) as Xuan Xuan. Photo from Facebook. 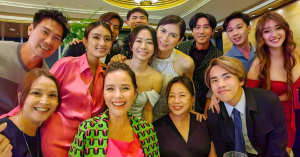 Zoe Tay and other local celebrities at Joanna Theng’s wedding. Photo from Instagram.

On 28 July 2022, Joanna Theng’s wedding made the headlines after it had been reported that her wedding boasted a celebrity guest list, including actress Zoe Tay and other artistes such as Xiang Yun and Edmund Chen, Pan Lingling; the event also saw local online personalities like Jianhao Tan and his wife, Debbie.[22][23]

On 22 July 2020, City Revival Singapore uploaded a video on Instagram featuring Joanna Theng and Jaime Wong. In the video, the two made statements against homosexuality that provoked backlash from netizens. They cited the gay pride movement and its rainbow flag as examples of satan's deception in present-day society.[24][25] The original video has since been taken down although copies of it can be found on YouTube.[26] On 25 July 2020, Joanna Theng and Jaime Wong[27] both apologised for causing hurt to the LGBT community. Excerpts from Joanna Theng's apology reads as such:

Before I go, I would like to publicly say that all I’ve said in City Revival’s video was never out of the intention of my heart to hurt anyone, but I understand how some of the parts had played out and were received... I am sorry that the way it was shared caused so much hurt. I sincerely apologise for that... For now, I will be taking some time off from social media to spend time with my family and my loved ones, in what has been a painful time for all of us, myself included."[28][29]