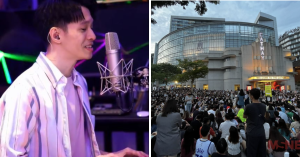 Jeff Ng, busking at The Cathay. Image from Jeff Ng.

Jeffrey Ng Chang Jun (‘黄長俊’), better known as Jeff Ng, is a Singaporean music instructor and busker. He is best known for his regular performances on Saturday evenings outside The Cathay, where he attracts large crowds. He rose to fame through his TikTok and Instagram (@jeffhellomusic), where he has over 29.3k and 45.5k followers respectively.[1][2]

In an interview with 8 Days, Jeff said that he didn’t enjoy singing growing up, and instead preferred basketball.[3] He was later inspired by his teacher who sang at a music café at night.[3]

In June 2021, Jeff got married to his partner Zona Ng.[4] On his TikTok, he has published videos of him and Zona performing various covers, such as a Christmas medley in December 2021.

While he was waiting for his Poly term to start, Jeff worked as a part-time waiter at the same music café where his teacher sang at.[3] While working there, he realised how much he loved singing, after finding himself singing along to those performing.[3] When he turned 18, he successfully auditioned for a job to perform at the café.[3]

Jeff Ng performing at Voice of China. Screenshot from YouTube.

In 2014, Jeff participated in reality television singing show The Voice of China, and eventually finished within the Top 22.[4]

In addition to his busking, Jeff works as a freelance music instructor with Ark Music School.[4]

When Jeff was first starting out in his singing career, he revealed that he subconsciously imitated professional singers JJ Lin and Jay Chou's singing styles because he really liked them.[3] In particular, he adopts a slurring style similar to Jay Chou’s, though he’s since made his pronunciation clearer after becoming a music instructor.[3]

Jeff is best known for being a professional busker, having used to perform at the now-defunct Chinatown Food Street.[5] He was first approached by the Chinatown Food Street Organisation and Singapore Tourism Board, who invited him to sing at a busking event.[3] He has been busking since 2018, though he had to stop his performances when the COVID-19 pandemic hit.[6] He regularly covers famous Mandopop songs by singers like Jay Chou and JJ Lin, of which his singing style has been likened to.[4]

Prior to busking, he performed at bars, weddings and corporate events.[3] 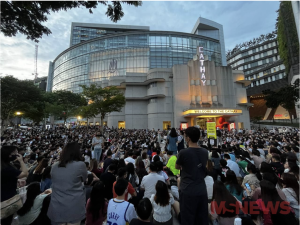 Large crowds gathering outside The Cathay to catch Jeff’s performance. Photo from MustShareNews.

According to MustShareNews, Jeff grew in fame when a video of his busking sessions went viral on TikTok, on 12 June 2022.[7] A couple of weeks later, the crowd had swelled considerably, so much so that it was reported there “seemed to be barely any space to sit on the ground, with people even standing in the bushes.”[6]

It is unclear if he will be continuing his weekly performances at The Cathay after his last planned performance on 25 June 2022.[6]

During his 25 June 2022 performance, Jeff announced that he will be hosting a “real concert” in August.[8] Details are unknown for now. Jeff also revealed that he has been approached by record labels, both local and overseas.[3] 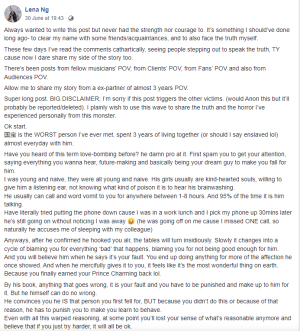 On 30 June 2022, Jeff Ng’s ex-girlfriend, Lena Ng published a lengthy post on Facebook sharing her traumatic and abusive past relationship with a “国宝” (national treasure).[9] This unnamed “national treasure” was eventually revealed to be Jeff Ng.

In the post, Lena Ng shared past chat receipts which exemplified Jeff Ng’s abusive and self-centred mannerisms, such as restricting her from following and liking Instagram accounts other than his, stalking her, or forcing her to kneel or kowtow to him.[9] These were just some examples of blackmail and the controlling behaviour detailed in the Facebook post.

This sparked outrage among Jeff’s fans and an online debate over the singer’s true personality; it also soured the public’s opinion of him.[10]

On 30 June 2022, Jeff Ng posted an apology on Facebook, explaining that he was “young and reckless in [his] 20s” and that he was “sincerely sorry”.[11] The singer posted this on his Instagram account as well.[12]

“I promise to continue to work hard at becoming a better person. Thank you for giving me a chance.” - Jeff Ng’s apology to his family, friends, and supporters.[11]

His wife also came out to defend him under the same Facebook post, saying that he was a “changed man”.[13]

I live with Jeff 24/7 and can attest to his behaviour. Jeff is a responsible person, and he respects, treats me well unlike what others are saying.” - Zona Tay on her husband, Jeff Ng.[13] 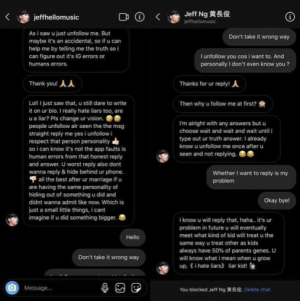 Jeff Ng interrogated netizens who had unfollowed him on Instagram. Screenshot from TikTok.

Jeff Ng interrogated netizens who had unfollowed him on Instagram. Screenshot from TikTok.

According to screen recordings and captures taken by netizens in early July, Jeff Ng was revealed to have an unpleasant attitude as a live streamer.[10] The busker was said to  indirectly threaten to end his livestreams if there was too much chat interaction among his audiences.[15] According to Facebook user Candy Mei Cui, he unfriended long-time administrators of his fan club for supporting other local performers.[10]

Multiple netizens have also come out to share their encounters with Jeff Ng on Instagram, where the singer would grill and even insult ex-followers for reasons why they chose to unfollow the singer.[16]

After previously cancelling his shows, Jeff Ng was spotted as an opening act at the imPAct Open House on 30 July 2022.[17] The event had been held by the People's Association in commemoration of the third anniversary of Hong Lim Green community club. The busker appeared to be more approachable and friendly, expressing his happiness at being back.