Jaime Ho (born 1973) is Singaporean editor who has worked for local publications such as Channel NewsAsia.[1][2] In October 2022, it was announced that he would assume the role of ST Editor, taking over his predecessor, Warren Fernandez.[1][2]

Prior to his editorial roles, he spent over 16 years as a civil servant under the Ministry of Foreign Affairs Singapore.[1]

Between 1993 to 1997, Jaime Ho pursued a degree in arts, graduating from NUS with a Bachelor of Arts (Honours), European Studies.[1] Later on, he decided to further his studies at the Lee Kuan Yew School of Public Policy (NUS), graduating with a Master in Public Management.[1][3]

From 1997 to 2013, Jaime Ho served as a civil servant under the Ministry of Foreign Affairs (MFA), where he was involved in Singapore’s diplomacy, bilateral, and multilateral relations.[1]

Jaime began his career as a Foreign Service Officer of MFA. In the 2 years or so following 1997, he had been involved in the formulation, review, and implementation of policies that impacted MFA's operations.[1]

In 2004, Jaime became the Assistant Director, Malaysia at MFA.[1]

From 2007 to 2008, Jaime assumed the role of Deputy Director of Public Affairs, where he oversaw collaborations and initiatives with community partners.[1]

Deputy Permanent Representative, Permanent Mission of Singapore to the WTO (2008 to 2011)

Between 2008 and 2011, Jaime served as the Deputy Permanent Representative of the Permanent Mission of Singapore to the World Trade Organisation (WTO).[1] He had mainly been responsible for the oversight of WTO-related matters.

Between February 2012 and August 2013, Jaime was the Deputy Director of MFA’s Climate Change Office, where he oversaw the state’s climate commitments and action plans.[1]

In 2013, Jaime joined Mediacorp as an Associate Director, where he oversaw the local news via the TV newsroom.[1] He subsequently took on the roles of Deputy Chief Editor of Radio News, and later, Chief Editor of CNA International News.

On 1 July 2020, Jaime Ho participated in a live debate as part of the 2020 General Elections.[4][5] He was a moderator for the televised debate between the candidates of the 4 contesting political parties: Vivian Balakrishnan (People’s Action Party), Jamus Lim (Worker’s Party), Chee Soon Juan (Singapore Democratic Party), and Francis Yuen (Progress Singapore Party).[4]

“I would say that, foreign policy also ultimately is formed by local factors. As you see developments in Singapore and we were talking about this, do you think it has made your foreign policy a bit more complicated, a bit more difficult, especially as it relates to relations with a big country like the United States and China, but maybe the United States for this conversation?”[5]

In 2014, Jaime Ho was promoted to Chief Editor of Channel NewsAsia. In particular, he oversaw CNA Digital.[1][2]

Jaime Ho joined the strategic advisor, FGS Global on 26 July 2022.[1] According to FGS Global, this was part of a notion to bring in senior advisors to strengthen the company’s capabilities in the region.[6]

“I hope that my experience and networks will allow FGS Global to grow its presence in Singapore and the region, and serve a growing range of clients in Singapore and Southeast Asia to navigate an increasingly complex stakeholder economy. The ability to do this while leveraging FGS Global’s established capabilities and talent at a global level is an incredible opportunity.”[6] 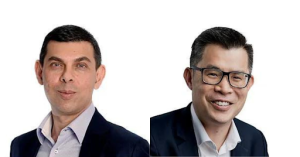 On 11 October 2022, it was announced that SPH Media Group would be undergoing changes to its leadership.[2] Among the new appointments was former Chief Editor of Channel NewsAsia (CNA), Jaime Ho, who succeeded Warren Fernandez as the new The Straits Times (ST) Editor.[2]

In his new role, Jaime will be taking over a team of more than 300 journalists, editors, and producers.[2]

“I am honoured to have the opportunity to play a role in the next phase of ST's transformation, especially as it pushes its digital growth and takes on the challenges of disruption in the news and media industry in Singapore and around the world.”[2] 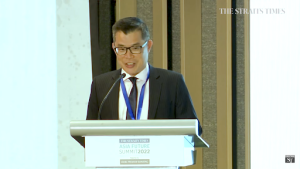 Upon his new appointment under SPH Media, Jaime Ho makes his first media appearance as ST Editor.[7] His opening address at the inaugural ST Asia Future Summit is featured on The Straits Times’ YouTube channel.

“This year, as the world begins to emerge from the pandemic and to mark SPH’s own transition from a listed company to SPH Media Trust, we wanted to take the opportunity to refresh and build on ST Global Forum to widen its reach beyond Singapore, and to deepen the position of our titles as top-level conveners of thinkers and do-ers around the world.”[7]

During the 2020 General Elections, Jaime Ho took on the role of moderator in a live, televised debate between four electoral candidates.[4][5] They were Vivian Balakrishnan, Jamus Lim , Chee Soon Juan, and Francis Yuen.