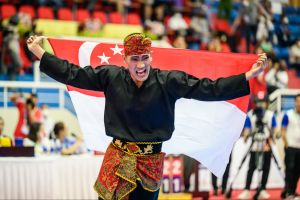 According to his Facebook profile, Iqbal had studied at ITE College East, before moving on to study at the Singapore Sports School.[1]

At the 8th Southeast Asia Pencak Silat Championships held in Singapore in early 2022, Iqbal scored 9.945 in the Senior Artistic Male Single event, securing him the gold medal for the event.[5]

At the 2022 SEA Games in Hanoi, Iqbal secured his first ever SEA Games gold medal, after having been unsuccessful in his last five attempts.[6] During the men's artistic singles (Tunggal) final, he attained an average score of 9.960 from 10 judges, beating fellow finalist Ilyas Sadara from Thailand, who had scored 9.930.[7] This was also Singapore’s first gold medal at the 2022 Games.

Commenting on his win, Iqbal said that:

“I am beyond grateful. I am always confident and I am always feeling great about my capabilities. I did not have the slightest doubt about myself. I was confident I would give my everything and I managed to do that. It's always great to be the first one to contribute to anything. I am happy to win the first gold medal for the silat team and Singapore. It's a good feeling.”[7]