Gillian Tan (born 1980) is the founder of Clicknetwork and its parent company, Munkysuperstar Pictures. Regarded as one of Singapore's web content pioneers, Gillian Tan has produced successful series such as ‘Girls Out Loud’, 'Tried and Tested' and 'That F Word'.[1][2][3] Through Clicknetwork, she has worked with well-known social celebrities such as Rosalyn Lee, Andrea Chong and Tyen Rasif; among others. In 2017, Gillian Tan was a nominee for Women's Weekly's The Great Women Of Our Time Awards under the Science and Technology category.[4]

Gillian Tan was born in 1980 to Tan Eng Soon and Wee Beng Yan, both of whom were entrepreneurs with their own businesses.[5] Gillian Tan's father, Tan Eng Soon is the chairman of the motor industry company, Tan Chong International.[1] Her late mother, Wee Beng Yan was the founder of the fashion label, Tyan Fashions.[6] Gillian Tan has three siblings.[1] Speaking to Women's Weekly in 2017, Gillian Tan said:

"When I was a kid, I used to love watching movies. I would try to make home videos of my parent’s birthdays... So from way back as then, I knew I wanted to study video production at university and learn how to work with cameras properly and learn how to edit. It was very clear to me that I wouldn’t do anything else."[4]

After graduating from Santa Clara University, Gillian Tan worked for three years in San Francisco as a broadcast assistant at the Federal Reserve Bank of San Francisco and subsequently, TBWA\Chiat\Day where she edited television commercials.[8] She returned to Singapore in 2003 to set up her independent production company, Munkysuperstar Pictures.[9] 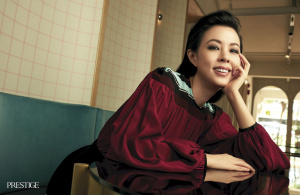 Gillian Tan for Prestige Magazine in 2020.

“When I started the company, it was not even something that I was aspiring towards; it was never an end goal. I hope that this shows that even a tiny country like Singapore can reach out to so many people all over the world.”[11]

In 2015, Gillian Tan was a panellist at the Her World Young Woman Achiever Forum where she spoke to an audience about her journey in the local media and broadcasting industry.[12] In recent years, Clicknetwork and Munkysuperstar Pictures has worked with sponsors such as IMDA to produce series such as 'No Sweat' starring the fitness influencer, Tyen Rasif and 'Girl Band Called Girl Band', starring Munah Bagharib.[13] 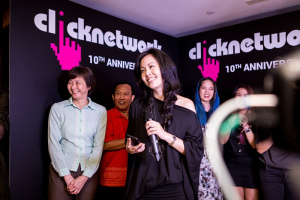 Gillian Tan founded the production company, Munkysuperstar Pictures in 2003 with the help of a $10,000 loan from her mother.[1] Inspired by “mindless entertainment” such as the American show, 'The Bachelor', Gillian Tan produced her first show, 'Eye For A Guy';[14] Singapore’s first English reality dating show which aired on Mediacorp’s Channel 5 in 2004.[15][16] The show successfully ran for two seasons and won the Best Reality Programme award at the 2005 Asian Television Awards.[5][17][18] Under her direction, Munkysuperstar Pictures has also produced network-commissioned TV shows such as 'S-Factor', a reality modelling show where the winner appeared on the cover of the men’s lifestyle magazine, FHM.[7][19] Gillian Tan also produced 'Girls Out Loud', a reality-variety show that was hosted by the former radio DJ, Rosalyn Lee (Rozz) and the blogger-influencer, Wendy Cheng (Xiaxue).[20][21]

Branded as a reality-lifestyle channel that is geared mainly towards a millennial female demographic, Clicknetwork was founded in 2007 out of Gillian Tan's interest.[22][23] She reportedly used the money gained from the TV shows produced by Munkysuperstar Pictures to fund Clicknetwork’s videos but only began generating profits in 2012. Speaking about the early years of Clicknetwork, Gillian Tan said:

"The first couple of years after we went full-time with it in 2010 were tough. But I strongly believed that it was the right direction, despite many naysayers knocking down the idea and criticising our content."[7]

Gillian Tan reportedly has a good relationship with her hosts with several of them having made testimonies of her character over the years.[24] Speaking to Scene.sg in 2017, 'Tried and Tested' host, Oon Shu An said:

"I feel so lucky to be a part of Clicknetwork because it’s such a unique platform. All of the hosts have such different personalities, yet the channel somehow manages to bring all of us together on one platform – thanks to the visionary that is Gillian Tan."[25]