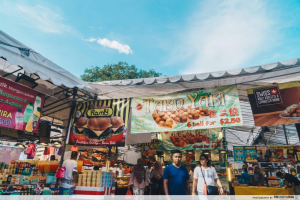 The Geylang Serai Ramadan Bazaar is an annual large-scale street market, commonly held during the Muslim fasting month of Ramadan. Consisting of over 500 stalls, the bazaar is held at Wisma Geylang Serai and its surrounding areas.

Up to the 1960s, Ramadan shopping in Geylang Serai was served by the shops and the itinerant and seasonal traders converging in the vicinity. This eventually spread to the adjoining Eastern Trade Fair, which was opened in 1948. The Trade Fair was eventually demolished in 1962 to make way for the Geylang Serai HDB scheme, which was completed in 1964. It included a market and concourse complex, called Pasar Baru (New Market).[1]

Pasar Baru eventually became the focal point of the annual Ramadan bazaar from the early 1970s up to the present day.[1]

Despite a redevelopment of Geylang Serai and resettlement of its residents in 1972, the bazaar remained popular and well-patronised by Malays in Singapore. Shoppers from Malaysia and Brunei also regularly travelled to Singapore to visit the bazaar.[1]

In 1983 and 1984, the Tanjong Katong and Joo Chiat Complexes were opened respectively. This helped to accommodate more shops for the annual bazaar.[1]

In 1984, the Singapore Tourism Board (then-called Singapore Tourist Promotion Board or STPB) initiated the idea of a street light-up, as well as introducing the new trend of media involvement through guest star appearances and performances staged at the bazaar. The Geylang Serai Citizens’ Consultative Committee (CCC) and later Kampong Ubi CCC also began organising additional Ramadan bazaars and trade fairs in Geylang Serai. 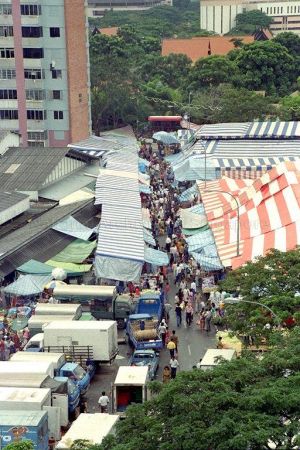 In the 1990s, the Geylang Serai Ramadan Bazaar was a vibrant affair, though the crowds were not as huge as in modern times.[2] According to photos from the National Archives of Singapore, common items being sold at the Ramadan Bazaar in the 90s included traditional food items like bamboo rice and grilled fish, as well as traditional snacks and fashion items alongside household items.

Between 2016 and 2018, negative sentiment toward the bazaar’s “hipster” slant grew when food items such as edible helium balloons and rainbow taco made an appearance to attract a younger crowd. Some within the Malay-Muslim community criticised the bazaar for losing its Malay identity and “Ramadan vibes”.[3][4] It also prompted the launching of some online petitions to the Government to “reinstate the Geylang Serai Ramadan Bazaar back to its original intention”.[5] 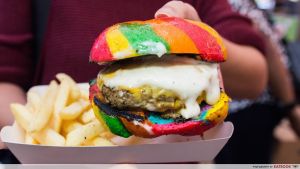 Example of rainbow-themed food which drew criticism. Photo from Eatbook.

In 2017, two halal-food blog sites conducted on-the-ground research by approaching every food vendor in the bazaar to find out if the stalls were either Halal certified or owned by a Muslim boss.[6] According to Vulcan Post, they discovered that “a great number of stalls fail to satisfy either one of the conditions.”[6]

Several measures were implemented by the organisers,[8] These were:

As such, this saw a rise in more traditional food associated with Malay-Muslim culture, such as grilled prawns and various deep-fried confectioneries being offered at the bazaar.

In light of the evolving COVID-19 outbreak in Singapore in 2020, the People’s Association announced that the annual Hari Raya Bazaar would be deferred, and this included the bazaars at Wisma Geylang Serai, Our Tampines Hub and Woodlands.[9][10]

The cancellation came after the Government announced that all ticketed cultural, sports and entertainment events with 250 participants or more were to be deferred or cancelled.[11]

In response to the cancellation, businesses pivoted to selling their food and goods online, although many conceded that sales paled in comparison to an actual physical event.[12]

In 2021, it was announced that the bazaar would continue to be an online affair, as COVID case numbers were still on the rise.[13]

In March 2022, it was reported that the bazaar would be making a return as a physical event, after having been cancelled for two years due to the pandemic.[14] This was after the People’s Association called for tenders for a "Geylang Serai Hari Raya Shopping Experience 2022" during the period of Ramadan (2 April 2022 to 2 May 2022).[14]

There would be two physical bazaars held in 2022: one in Geylang Serai and the other at Kampong Glam.[15] Both bazaars will be open from 1pm to 11pm.

As part of the festivities, there would also be a light-up in the Geylang Serai area from 31 March 2022 to 8 May 2022, covering the vicinity of Geylang Road, Changi Road and Sims Avenue.[16] The theme of the light-up is “Gotong Royong – Unity and Resilience”, which celebrates the spirit of the community helping one another and kindness, themes which especially resonate in light of the global pandemic over the last two years.[16]

Changes from past bazaars

The Geylang Serai Ramadan Bazaar in 2022 is smaller in scale to ensure public safety as Singapore eases into living with Covid.

The 2022 bazaar will feature a total of 40 stalls, which is a significant drop from the 500 to 800 stalls in previous years.[17] There will also be a cap of 600 visitors at any one time within the bazaar, in line with safe distancing rules.

To manage the crowd volume, the organisers will be implementing a crowd control system where each visitor would be given a small laminated card upon entry, which they will have to return upon exiting the bazaar.[18] There are also fixed entrances and exits to the bazaar.

On the first day of the bazaar, there was such an overwhelming popularity that organisers had to temporarily stop people from queueing to enter one of its zones where food was on sale.[19] Changes were also made to ensure shorter food preparation and queue times, by allowing food stallholders to have up to six people manning their stalls, two more from the four originally allowed.[19]

On 5 April 2022, The Straits Times reported that in view of the relaxed safe management measures, the bazaar would be expanded to accommodate more stalls and visitors.[20] The changes include the addition of two more zones to host 30 more food and retail stalls, bringing the total number of stalls for the 2022 bazaar to 70. Each zone would still have its own queues, and separate entrance and exit points for better crowd management.[20]